Director Abhijeet Deshpande recalls the legendary artiste's reaction to another actor portraying him on screen.

There has not been a biopic on Dr Shriram Lagoo yet. But we saw a good part of his character and life being explored in the film Aani... Dr Kashinath Ghanekar (2018) by actor Sumeet Raghvan. The film was a biopic of Dr Kashinath Ghanekar, one of the stars of the Marathi stage and cinema in the 1960s and 1970s.

Abhijeet Deshpande, writer and director of the film, created the on-screen character of Lagoo after undertaking a lot of research. Following Dr Lagoo’s death on Tuesday aged 92, Deshpande looked back at the legendary artiste’s life through the process of making his film and shared the experience of meeting the man himself.

“One can say he was the biggest legend to step on stage,” said Deshpande. “The kind of work he did and the variety he pulled off is amazing. I don’t think any other actor has achieved that.

"He was also a rare personality who mastered both mediums — camera and stage. You would have seen in my film that Kashinath Ghanekar never liked the camera. But Lagoo did both effectively.”

Lagoo's biggest success was his incredible performance in the Marathi play Natsamrat. “He immortalized the role," said Deshpande. "He took it to such a level that every young actor who wanted to debut on stage aspired to perform Natsamrat, and the tradition continues even today. He has placed his own performance on such a pedestal that he became an aspiration for an entire generation and those who follow.”

Deshpande pointed out that Lagoo’s other achievement was to make a place in people’s heart when someone else was ruling the roost. “When Kashinath was the reigning superstar, to displace him and make a place for himself was the most difficult task. You have to give credit to Dr Lagoo for that,” he said.

Deshpande was the writer on Mahesh Manjrekar’s film adaptation Natsamrat (2016) in which Nana Patekar played the titular character. Manjrekar’s team had taken Dr Lagoo’s blessings before starting the film’s promotions. Deshpande’s conversation with the legend helped him later in Aani... Dr Kashinath Ghanekar.

“That was when I interacted with him for the first time,” the writer-director said. “I had heard so much about the legend, so I couldn’t help but ask him, ‘What was your approach towards Natsamrat?' He gave me one line which made my future journey easy. He said, ‘Natsamrat was about high melodrama with restraint.’ The paradoxical thing that he told me I passed on to Sumeet while briefing him.”

Deshpande was reminded of an anecdote that he had come across while researching Lagoo for his film. “He had played the role in Natsamrat so effectively that people those days used to hesitate to register properties in their son’s name. They thought whatever happened to Natsamrat would happen to them,” he said. 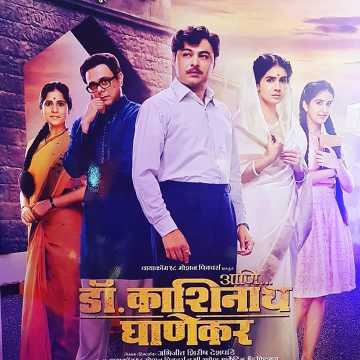 To prepare Sumeet Raghvan for the role, Deshpande gave him all the information he had collected and specifically mentioned that almost everyone in the film has grey shades, including Lagoo. “I told him: here is a man who has grey shades. In our film we haven’t shown anyone completely good or bad. Lagoo sir also at points has envy for Kashinath, for the way he is able to sway the audience,” said Deshpande.

Lagoo’s last public appearance was his presence at the screening of Aani... Dr Kashinath Ghanekar in Pune last year. It was, obviously, a big moment for the film's team. “He sat through the whole film. He blessed all of us. He told both Sumeet and Subodh [Bhave, who played the lead role] that he was amazed by the work done by today’s actors,” said Deshpande.

The biggest approval from the veteran came during the song ‘Tumhavar Keli Mee Marjee Bahal’. It is a song from V Shantaram's Pinjra (1972) and was picturized on Sandhya and Shriram Lagoo. As Sumeet was playing Lagoo in Aani... Dr Kashinath Ghanekar, the song was picturized on him. “During the song he was sitting next to Deepatai [Lagoo, the actor's wife]. He asked her, ‘Is that me?’ That was a great compliment for Sumeet, more than any other. The kind of poise he showed without imitating was impressive,” Deshpande said.

Playing someone so senior, well known and respected as Shriram Lagoo did make Sumeet Raghvan apprehensive. “He was concerned because a lot of biopics are made. And this part was about Dr Lagoo, whom he adores. He thought if he was going to play that role out of excitement, would he be able to do justice to it? I narrated each shot to him in detail with the dialogues. Then he was on board,” Deshpande said.

The writer-director was greatly impressed by how Sumeet performed the role of Lagoo. “Sumeet is such a fabulous actor that he filtered everything and just presented his own Lagoo without imitating him. He went to the soul of the character,” said Deshpande.

Asked if he would like to make a biopic on Dr Lagoo, Deshpande said, “It won’t be right to speak about it right now. But if I get an opportunity later, I would love to pay tribute to the great artiste.”