The reputation of a filmmaker is as good as his last film: Saurav Rai on Nimtoh's journey

An ostensibly simple story of a ten-year-old boy Tashi who is anxiously waiting to receive an invitation to a wedding being held in their landlord’s house, Nimtoh opens up a range of perspectives into a seemingly serene and ideal village life. Inspired by personal experiences of the filmmaker, the film captures the relationships between the different strata of society where the less privileged are viewed with suspicion and mistrust.

Nimtoh is the acclaimed debut feature film of Saurav Rai, an alumnus from Satyajit Ray Film and Television Institute. His short diploma film Gudh (2016) was screened at the Cannes Film Festival in the Cinéfondation selection and Nimtoh was among the five projects chosen by Hong Kong - Asia Film Financing Forum Work-in-Progress Lab, to participate in a pitching session in Cannes this year. The film was awarded the Grand Jury Prize at 21st Mumbai Film Festival and has been selected for the International Film Festival Rotterdam next year.

In an exclusive conversation with Cinestaan.com, the filmmaker talks about the ideas that he wanted to explore in Nimtoh, while sharing the journey of the film.

On the surface, the film is about a little boy and his desire to be in a wedding but it opens up to explore a range of issues deep within the traditional village life. How did the film come about?

There was a minor event that happened during my own wedding that involved a child and people were very quick to draw judgement, so it raised several questions in me. But it stayed in my mind and kept me thinking about the idea of morality. A village looks like a serene river from the above with its serene life but there are undercurrents that are flowing. It’s a slow reflection and I was questioning myself about whether or not the child was involved in the said incident.

So we decided to probe the matter through cinematic language as a matter of fact finding, putting real people in real-life situations and recreating the scenarios in order to go beyond what happened. But there were lots of memories, anecdotes that came together, so the film is not just based on one incident, but on a series of characters and events. For me, the incidence was a way to probe into the invisible malice, let us say, in a village set up.

The quiet villages are usually portrayed as traditional, are peace loving societies but of course, they have their own dynamic and are steeped in their prejudices. How important was it for you to use a child protagonist with all the innocence, naughtiness, and charm to expose the underside?

The seed [of the story] started with the kid itself but the story goes much beyond that. The incident was just a way of reflecting on the system. I had worked with this kid when he was just about 6 years old. I knew that I also wanted to do something for this kid because he is representative of kids from this village or from any village in the world, to reflect on the fact that kids are also mature and they reflect a greater philosophy than the grown-ups. So that was very important for me.

In some way, I was also addressing my own childhood through the child [in the film]. Surprisingly, I used to say during my film school days that I would never make a film with children. But my previous film, Gudh [Nest], was also about a 10-year-old kid, as is Nimtoh and my next film also I guess, is about a 6-year-old girl, so one may never know what one ends up making and it’s turning out to be a pattern! 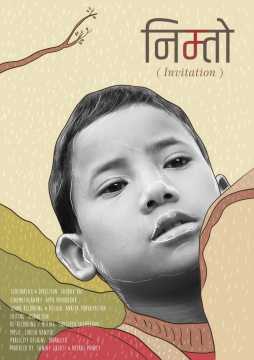 How did the decision for you to act in the film come about?

I don’t think any director wants to act in their own film, especially in their debut film! For the role of the groom, the casting was so strong and everything was in place, but at the end moment, due to financial decisions and the demands from the actor, it really put the production under pressure. Being an independent film, we had some constraints, so it was a desperate call and with hesitation I stepped in and had to play the role much to the displeasure of my own team. But like they say, the show must go on.

The juxtaposition between the traditional and the modern is captured in the portrayal of gender in a very real and natural manner, especially with the way in which that scene unfolds between the couple.

I think it was more of a tribute from me to the women of my society because while Asian societies are largely patriarchal societies, not every part of the world, and every village is like that. For example, in my part of the world, women are stronger. They are the breadwinners and the torchbearers when it comes to decision making. So when I saw the character [the bride in the film], I saw the same kind of power and confidence and she naturally came into the scene and it fit perfectly. So, she is the real representative of the women who are there now in society.

Tell me about the journey of the film. How has being at the Cannes Film Festival, the NFDC Film Bazaar and the Mumbai Film Festival been beneficial for you to get the word out on the film?

Nimtoh took a long time in the making. We started with the NFDC Work-in-Progress lab and the mentors were very important and the DI (Digital Intermediate) award that Prasad Labs gave [at the NFDC Film Bazaar’s Work-in-Progress Lab] was very helpful in finishing the film. And the producer Sanjay Gulati helped a lot in the finishing of the film. Then another lab in Hong Kong gave us the marketing money to visit the market at Cannes for Nimtoh and then we started applying to the festivals, which was too late.

So that was a difficult journey and we were novices in the process. But we applied to MAMI [Mumbai Film Festival] and the response was fabulous. We are still applying for festivals internationally so the journey has just started, but our role as the filmmaking team has come to an end. Now Nimtoh has its own fate and we have moved to our next venture but it’s a tough journey. But there are so many people who have helped us along the way. The reputation of a filmmaker is as good as his last film and my last film was over by 2017 and had a good festival run, so let’s hope for the best.