To change a world, everybody has to look to themselves: Andreas Ewels on the importance of awareness


Journalist and filmmaker Andreas Ewels talks about his documentary on the darker aspects of vanilla production and the ways in which films about the environment need to create awareness, leading to responsible choices and action.

The documentary Vanilla: The Hunt For The Brown Gold by Andreas Ewels takes an incisive look at a commodity used ubiquitously in countless products. However, there is a treacherous process that brings the seemingly innocuous product to our homes. Over the years, the demand for vanilla has been rising steadily and a fight for the world's most expensive spice has broken out. The film takes us into the fascinating world of vanilla but also shows the dark sides of this wonderful spice.

Journalist and filmmaker Ewels has produced over 200 documentaries in 18 years for television. They deal mostly with nature and environmental issues. In an exclusive conversation with Cinestaan.com, the filmmaker spoke about some of the revelations in making the film and discussed the role that environmental filmmakers can play in raising awareness about issues that plague society today. Excerpts:

While there is considerable awareness about certain ingredients and their production, especially coffee and cocoa, one doesn’t usually think of vanilla production. What led you to explore it in this detailed way? 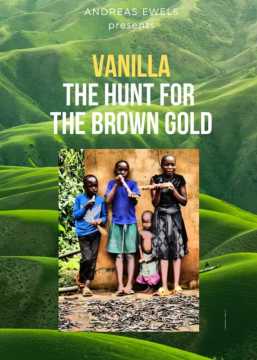 Three years ago, I did a documentary on saffron in Iran. I went there with a German guy trading in saffron and kept in touch with him. One day he asked if I had heard about vanilla prices going up from 30 euros a kilo to 650, 700 and then 800 euros. I thought that was very interesting. He also said that as a small trader, it wasn’t easy for him to get vanilla because there is less vanilla and prices were too high. He was going to Madagascar and asked if I wanted to join him. I agreed. I thought the price explosion of vanilla must be having a social impact. So, I decided to go to Madagascar and Uganda.

What were some of the things you discovered while making the film about what was going on with vanilla production?

Two things. One was when I started the research about the film. When you talk about vanilla in Germany, it’s like cinnamon, it’s connected to Christmas — Christmas cake, etc. So I started finding out which kind of products does one find vanilla in. It was amazing how many products you have vanilla in these days. There is the really expensive vanilla, the concentrate, and it’s in so many products — in frozen foods, soaps, detergents, Coca-Cola and so many products — and I did not expect that. Before that, I thought it was just in Christmas cake and vanilla ice-cream!

That was the first thing that surprised me. The second was how aggressive the situation is in Madagascar right now. You see that in my documentary, where there is a journalist for a radio station, Radio Vanilla. This person is the only one who is watching the crimes related to vanilla. There are a lot of farmers killed in Madagascar, but more thieves are killed. We reached there in July 2018 and from the beginning of 2018 till then, 98 people had been killed in connection with vanilla. I talked to really ordinary, normal people, who were very friendly and told me they had killed a thief the week before! They all felt that they had to do it since the police was not taking care of it. They said that nobody was going to steal their vanilla.

We know about fair-trade chocolate and coffee beans and the ways in which they are cultivated and traded. Also about the plight of the farmers and their exploitation. But there isn’t so much awareness about issues regarding vanilla cultivation and trade.

That’s true. The awareness has to be bigger when it comes to the consumer. There are some people in the area in Madagascar who are trying to do fair trade, but it’s really hard to go to the good vanilla areas unless you know someone there. It’s also quite hard to get the real picture because sometimes the companies say they are doing a lot for the farmers — some say that’s true; others say it’s not. If you do research in those villages, you realize that sometimes when they say bad things, they are not true — sometimes it’s just gossip from villagers. It’s pretty hard to control and very hard for the consumer to say what’s right or wrong.

There is certainly more awareness about the environment today, but on the other hand, forest and ice covers are deteriorating at an alarming rate. It’s very hard to reconcile the rapid destruction with greater awareness. What do you think is the role of environmental filmmakers who try to create awareness through their work?

I think they have to be very sensitive because usually journalists like to hear that we are in a very bad situation and things are out of control. To be honest, I am getting a bit angry about that, because many filmmakers make a living from this. They do stories and show things that are over the top and a good and bad side.

But in most of the stories, it’s neither black or white, it’s grey, somewhere in the middle. There is greater awareness, but it is not happening worldwide. If you go to countries like Poland, there is no great awareness. In Germany, it’s completely different. Environmental concerns are the number one priority and we have [events such as] Fridays for the Future.

I have done so many interviews with scientists and can say that we can slow down climate change, but we cannot stop it. As a journalist, I like to bring some realistic facts forward. To change the world, everybody has to look to themselves. To consume with a little more awareness because if you are more aware, that will definitely help, and like you correctly said the awareness is getting better. We are not in a good situation, but let’s not panic. It’s not the end of the world, but we have to make the world much better and we still have it in our hands to do something.

So what would be the role of an environmental filmmaker in the current scenario?

To show the facts, not to panic, like a normal journalist — to be as close to the truth as possible. I think my films win a lot of awards because I always try to show what’s really happening and I don’t blame it on the industry or the farmers. I feel that if you know how things work, you can make your own decisions about whether you want certain products. In the film on vanilla, I give you the facts and you can decide for yourself.

Vanilla: The Hunt For The Brown Gold was screened on 28 November at the Woodpecker International Film Festival 2019 in New Delhi.