The indefinite hunger strike has been called by the students association to protest the steep annual fee hike and the growing cost of the entrance exams.

The indefinite hunger strike called by students of the Film and Television Institute of India (FTII) entered the second day in Pune, Maharashtra, and received support from the Satyajit Ray Film and Television Institute (SRFTI) in Kolkata, West Bengal. The students association of SRFTI issued a statement in support of their Pune counterparts, announcing a parallel hunger strike.

The protest is mainly against the Joint Entrance Test (JET) conducted simultaneously by both institutes to shortlist candidates for admission.

In a statement by the students association of SRFTI read, 'Application fees for the JET range from Rs4,000-Rs10,000, making it the costliest entrance examination to any public-funded institute in India. This is almost four times the JEE Advanced entrance exam fee. The application fee for even a private institute like Whistling Woods is Rs3,000'.

The statement further adds, "Since both administrations have refused any immediate relief in this matter, we are exploring all options available to us to correct this wrong and make our institutes more inclusive and accessible."

The protesting students demand that the institutes 'revoke the 10% hike in academic fee every year, and reduce it' and 'stop the JET 2020 until the exam fees are reduced'.

Speaking on the strike, SRFTI student body president, Mahesh Krishnan said, "The problem is SRFTI currently does not have a governing council. Therefore, SRFTI director has to speak on whether they take any action on it or not. Until now, they have not given us any written or verbal assurance on what they are going to decide. They have just said that a governing council meeting has been called, and your concerns will be taken up. Now, that is not enough assurance because we have seen it happen before."

Krishnan added, "One week ago, when the governing council meeting had been called on 9 December, we had raised these concerns. They had sat around the table and decided that they will lower the fees for next year, but this year we cannot do anything. Then, on consecutive days, the responses from the governing council was that they had principally agreed on lowering the fees, but had not passed any decision. This kind of bureaucratic delaying of the same is we know what they plan to do. The thing is there is a lot of revenue from these remunerations for SRFTI and FTII, which they are not going to give up." 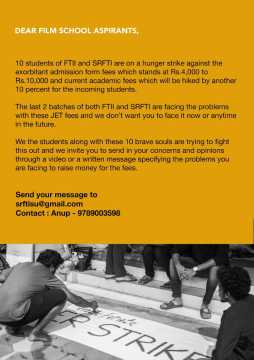 He further stated that the students from both institutes will keep the hunger strike going, and have also appealed for applicants to the JET to write petitions to the governing council as part of the protest.