15 years of Swades: Box office hurt me, but I knew it will be remembered, says Daya Shankar Pandey


Daya Shankar Pandey, who played the cook Melaram, gets nostalgic about the shooting of the Ashutosh Gowariker film and the scary experience he had with leading man Shah Rukh Khan.

Director Ashutosh Gowariker’s Swades (2004), which starred Shah Rukh Khan, did not set the box office on fire when it was released 15 years ago. But as it happens with some films, it began to gain respect after multiple television screenings and a DVD release. Today, a decade and a half on, the film is considered a classic and easily one of the best from Khan’s long career.

The film revolved around Mohan Bhargav (Khan), a global precipitation manager at the National Aeronautics and Space Administration (NASA), who returns to his native Charanpur with the aim of taking foster mother Kaveri Amma (Kishori Balal) back with him. While in Charanpur, Mohan meets the strong-minded Gita (Gayatri Joshi) and falls in love with her despite her opposition to the idea of Kaveri Amma leaving India.

Slowly, Mohan gets involved with the day-to-day issues of the little village and its many characters. Then comes the moment when he has to return to the US. After resuming his work at NASA, Mohan realizes his heart belongs in India and returns to his swades (homeland).

Actor Daya Shankar Pandey played the important character of Melaram in the film. An aspiring cook, Melaram tries to impress Mohan Bhargav in the hope that the scientist would help him open a dhaba in the US.

As Swades completes 15 years [the film was released on 17 December 2004], Pandey gets nostalgic about the shooting of the film and his experiences, in an exclusive conversation with Cinestaan.com.

“Swades is one of the films closest to my heart from all the films I have done so far,” Pandey said. “There are a few films that people will mention when they write my obituary, like Lagaan (2001), Makdee (2002), Gangaajal (2003) and Swades. I have been lucky that way.”

Not many may know that Pandey also assisted Gowariker on this film. “This is because I didn’t have any other work at that time," the actor said. "And in this film, Ashutosh had cast me even before the hero [Khan]. He had said I will do Melaram. I had grown my hair for the role." 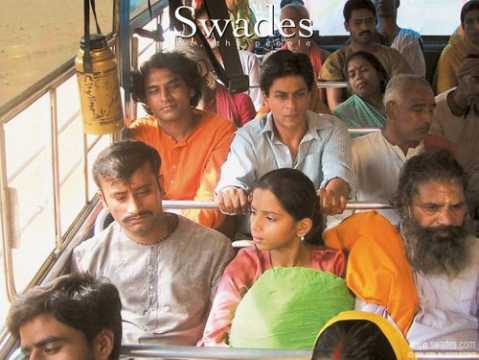 During this time, Pandey was offered a role in Milan Luthria’s Deewar: Let’s Bring Our Heroes Home (2004). But he would have had to cut his hair for that film. So he refused and stuck with Swades.

Pandey is touched when people speak to him about Swades today. “Whenever I go to places like airports, I meet at least eight or 10 people in a month who come up to me and speak about Swades," he said. "I receive messages too when the film is played on TV."

One of the most appealing moments in the film is when Pandey’s Melaram tells Mohan he does not wish to go to the US any more. “It is like apni chaukhat ka diya and giving life to nebarj [neighbour's] house," the character tells Mohan. Pandey revealed that the dialogue was initially supposed to be entirely in Hindi, only to be changed at the last minute.

“Ashutosh took one shot and after watching it on the monitor suggested that I speak the next line in English since my character is obsessed with the language," Pandey recalled. "By the grace of god, I thought of the line ‘and giving light to nebarj house’ in 30 seconds. Ashutosh asked me not to tell Shah Rukh about it. So, I said the updated line directly in the shot. Hence, you can see that natural reaction on Shah Rukh’s face.”

Daya Shankar Pandey also shared an experience of a meeting with a former student from the Indian Institute of Technology (IIT) who is currently working on the Mumbai Metro project. The guy told him Swades and Melaram’s dialogue played a big role in him not moving abroad after he completed his engineering degree. “He felt he should work in his country itself. It is good that people got inspired for their country through this film. There are other examples of people returning to India. But Ashutosh hadn’t made the film with this intention,” said Pandey.

Pandey also said that after Lagaan, Gowariker was offered some very big projects. But he wanted to make Swades as the story was very close to his heart.

Swades is also known for its stand against the caste system in a subtle, gentle way. Pandey said Melaram belonged to the Other Backward Classes (OBC), who seldom become cooks since people don’t prefer eating food cooked by the so-called lower castes. “What Ashutosh showed was that as this person is an OBC, he wants to open a dhaba in the US as there is no caste discrimination there. You will rarely find an OBC in catering colleges,” said Pandey.

Pandey also recalled how much Gowariker focused on detailing. “He says that even if 10 people out of 100 notice it, they will remember it for life,” said the actor.

Pandey was spellbound by Shah Rukh Khan’s memory during the shooting when the latter had to mouth a long piece of dialogue on comparisons between India and the US. “That scene was supposed to get over in just one day," he said. "I have seen other heroes divide such scenes over two or three days. I was wondering whether Shah Rukh would be able to remember such a long dialogue. Ashutosh told me, you have no idea about Shah Rukh’s memory.”

Pandey was stunned to see SRK, as the actor is popularly known, give the shot in one take. “It turned out to be one of the best scenes of the film. I realized his memory is too sharp and he is also a very good human being," the actor said. "After the director says ‘Cut’, he does not appear like a star. He is just a normal human being. Even today, whenever he meets me, he addresses me as Melaram!”

Pandey said he is no good at dance. Hence, during the iconic ‘Yeh Tara, Woh Tara’ song, he is just seen standing behind. “Shah Rukh asked me why I am not dancing. I told him I don’t know how to. Shah Rukh said even he doesn’t know how to dance and asked me to just follow his steps. So, at the end of the song you can see me dancing where I am just following his steps,” said the actor, laughing.

Swades has a memorable scene in which Pandey, Khan and the late Rajesh Vivek (who played the postman Nivaran) are travelling three on a bike. The scene was suddenly thought of by Gowariker on the set. But Pandey wasn’t confident of pulling it off since he has bike phobia. “I told Ashutosh, let the hero ride. But he said I am the one who knows the village, not Shah Rukh’s character,” the actor recalled.

Then something happened that scared the living daylights out of Pandey. “When I started the bike while rehearsing, it just went up and Shah Rukh was on the ground. I was shocked and frightened, more so since Shah Rukh had a neck issue then and was undergoing treatment. I felt this would like that Puneet Issar-Amitabh Bachchan situation in [the shooting of] Coolie (1983).”

Thankfully for Pandey, it didn’t turn out to be anything like that. “After five minutes Shah Rukh got up and started laughing. ‘I knew you don’t know how to ride,’ he remarked. The next shot was taken after just five minutes and you can see my tense expression in it,” Pandey said. 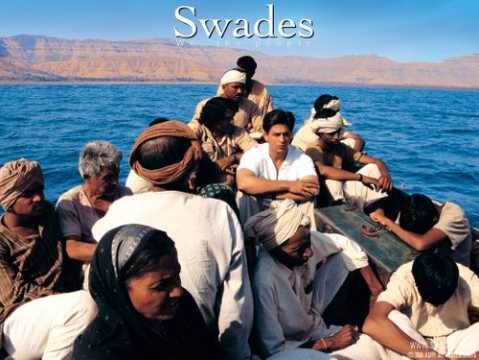 Pandey was, obviously, hurt by the film not doing well at the box office since he had had a memorable time shooting for it and also because they all believed in the film.

“It hurt me the most,” he said. “But I told Ashutosh that after this film he will reach [the late filmmaker] Bimal Roy’s category. I knew this film will be remembered by people. And today after 15 years if you are discussing the film with me, it is a big thing.”