As an actor I cannot continue to play safe, I have to take risks: Dev Adhikari on Sanjhbati


The action star admitted that of the entire cast he had to put in the maximum effort, more so because he did not want to be responsible for any drawbacks in the film.

Dev Adhikari, with Paoli Dam, at the trailer launch of Sanjhbati
give your opinion

Actor-producer Dev Adhikari will be seen playing a crucial role in Leena Gangopadhyay and Saibal Banerjee’s second directorial project Sanjhbati. The actiion star has triggered a wave of curiosity among fans by forsaking his usual macho-man avatar and playing the simple caretaker of an aged man.

Gangopadhyay, who was initially sceptical about getting Adhikari on board, said the star had shown an extraordinary zeal for learning on the sets and with sincerity and dedication he has turned convincingly into his character Chadu.

Sanjhbati, a tale of hope in the lives of lonely, aged parents, also features Soumitra Chatterjee, Lily Chakravorty and Paoli Dam in the lead roles. Theatre and film actress Sohini Sengupta has also essayed a crucial role in the film.

Speaking of breaking from his stereotypical image, Adhikari said, “For this film, I want my work to speak for me. I wanted to prove that I can adapt into such characters as well.”

At the film's trailer launch on 29 November, Adhikari admitted he was taken aback when first offered the role and felt the directors were taking a big risk by casting him.

“However, once I was on board, I knew I had to put in the maximum effort amongst all [the cast members]. I did not want to be responsible for any drawback in the film,” said the actor candidly.

Adhikari, who is mostly seen in heroic action roles, said a lot can be learnt from real-life characters. “When we become adults, we hardly try to look at our parents' lives from their perspectives; we tend to take decisions on their behalf. This film tries to highlight those little details that we tend to ignore in our relationship with our aged parents,” he said.

Adhikari admitted he primarily agreed to be part of the film because he wanted to challenge his own acting capabilities. “I am more eager to do experiments at this stage of my career," he said. "I never got a character like Chadu and I am glad I got the role when I wanted it the most. I was a bit scared too, thinking I might not live up to the expectations.”

He added that he has films of different genres in his bucket list now. In Sanjhbati, Chadu is a simple, innocent, compassionate man, driven by genuine feelings. Hence, this time, the audience may be more eager to delve into Adhikari’s performance than just soak his macho presence on screen.

“Sanjhbati is a performance-orientated film," he said. "My look is not really the focus here. I am surrounded by the best of the industry in this film. These actors are used to scoring goals whenever they get the ball to play with. In that context, I am way behind all of them. At the same time, Chadu is a very crucial character. Hence, I had no option but to focus on the nuances of my character.”

Adhikari first appeared with Paoli Dam in Rabi Kinagi’s I Love You (2007). There he played her brother. After 12 long years they have been paired for the first time as the romantic leads in Sanjhbati. “She prepares a lot before delivering her dialogues and there is a lot to learn for me in this regard," Adhikari said. "She is extremely serious and conscious of her each moment on screen. When I see her investing so much, I automatically get inspired to do better.” Adhikari believes their sincerity towards their work on the sets has contributed to their on-screen chemistry.

Sanjhbati is only the second project of director duo Gangopadhyay and Banerjee and the first production of Atanu Raychaudhuri. Adhikari said that while agreeing to do the film he did not look at them as newcomers but focused on the value of the project, “I love to take risks," the star said. "I believe those who are ready to take risks are also prepared to go far in their careers. Taking part in Chander Pahar (2013) was also a risk. Paglu (2011) and Challenge (2009) both were also challenging films in their time. As an actor, I cannot play safe for long. Risk is necessary to grow.” 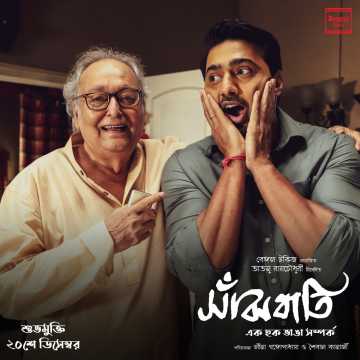 This is also the first time Adhikari gets to share the screen with Soumitra Chatterjee, an acknowledged great of Indian cinema. The excited actor could not help but disclose, “I think to get the opportunity of working with him was also one of the reasons for doing Sanjhbati. I hope the audience will understand my dedication to justify my presence on screen beside the living legend.”