Actress Dam believes the film's content is quite relevant and important for contemporary times as it deals with the issue of loneliness of the elderly.

With Dev Adhikari in a scene from Sanjhbati
give your opinion

For the second time, Paoli Dam will be seen playing a crucial character in a Leena Gangopadhyay-Saibal Banerjee film. The duo’s upcoming Sanjhbati features Dam playing a character very different from the one she portrayed in their previous film Maati (2018). Sanjhbati also features Soumitra Chatterjee, Lily Chakravorty, Dev Adhikari and Sohini Sengupta in important roles.

Dam plays Phuli, who takes care of Sulekha (Chakravorty), an elderly lady who has nobody else to look after her as her children live far away. There is Chhana Dadu (Chatterjee), an aged man, and the audience will perhaps need to figure out whether he is Sulekha’s brother or a romantic partner. Chhana Dadu is looked after by Chadu (Adhikari). Chadu and Phuli eventually fall in love, though it is clear from the trailer that their union faces many obstacles.

Dam feels the content of the film is quite relevant and important for contemporary times. “I went through an array of feelings and almost cried during the script-reading session,” said the popular actress.

Dam is quite excited to have played Phuli. “I will be forever grateful for having been approached for this role," she said. "Phuli is spirited, jolly, and despite having grave concerns in life, she is ever-smiling. She is also quite straightforward and doesn’t mind quarrelling when she has to. She is equally expressive in love and friendship. I don’t think any recent film has explored the kind of bonding Chadu and Phuli share in the film.”

Dam has portrayed many layered and complex characters in recent times, in films like Maati and Shantilal O Projapoti Rohoshyo (2019). “I love doing complex roles, but at the same time I was looking for a simple character like Phuli," the actress had said at the film's trailer launch on 29 November. "I am lucky I got the character at the right time.”

She thinks it an honour that Gangopadhyay thought of her for two drastically different characters in Maati and Sanjhbati. The character of Phuli promised an unexplored path for her. She was equally excited to be cast opposite Adhikari as she said it had been a longstanding wish.

“I am very happy we both got to work together for the first time as a pair in Sanjhbati," Paoli Dam said. "I feel Chadu and Phuli will leave a deep imprint in the minds of the audience. I must admit that the experience has been great. Sirsha-da [Sirsha Ray] did a great job as the cinematographer. The entire team of Maati was there and I was very happy to get back with the team.”

Sanjhbati is also Dam’s first film with the veteran Lily Chakravorty, while she has worked with Soumitra Chatterjee before. “I used to be amused each time Soumitra Jyethu [Uncle] would deliver a dialogue and try to observe the modulation. They are fantastic. It is my good fortune that I could share the screen with them,” remarked the actress.

Dam believes her co-star Adhikari, better known for his action roles, has done a wonderful job as Chadu. “It was quite amusing that our thoughts were extremely in synch," she said. "We could improvise on the floor and we have shared some funny sequences, too. Though we did a workshop with Sohag-di (Sen), it was quite amazing that we could act out our roles spontaneously. I think this was one of the best things to have happened to me in a long time.” 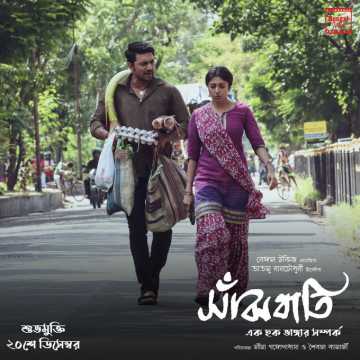 Dam was delighted to note that Adhikari had evolved both as an actor and a human being since they first worked together, when Dam played his sister in Rabi Kinagi’s I Love You (2007). “Honestly, he is one of the best human beings I have come across," she said. "And because he is such a good soul, he can do justice to good characters as well. He feels for the characters genuinely. I don’t think I can visualize anybody else as Chadu.”

Coming to the film's subject, Dam said the issue of loneliness of the elderly has been festering for some years now. “When we are young, we feel we can manage all by ourselves. We take our parents for granted,” she said. After shooting for Sanjhbati, the actress realized that our parents don’t live with us forever and so it is best to cater to their needs as long as they are here. “They hardly have demands, but we should think of them often and be by their side," she said. "That’s the best realization I had.”

The film suggests that it is important to be able to trust people beyond blood relations for a contented old age. “Sanjhbati depicts a two-way street through which the elderly trust their house helps to have company. I feel it has a social message, besides being an entertainer,” Dam said.

Sanjhbati is slated for release on 20 December 2019.