25 years of Hum Aapke Hain Koun: How a film rejected by the trade created history

Director Sooraj R Barjatya’s Hum Aapke Hain Koun..! (1994) was initially released in just 29 theatres across India. But the film gathered momentum and ran to packed houses in numerous theatres throughout the country, especially in Mumbai’s huge Liberty cinema, where it ran to full houses booked in advance for an entire year.

Funnily, the film starring Salman Khan and Madhuri Dixit did not appear promising to trade people who saw it before the release. This and some other interesting facts about the film were shared by Rajshri Productions managing director Kamal Kumar Barjatya as the film completes 25 years today (it was released on 5 August 1994).

“The response in the trade show was just lukewarm," Barjatya recalled. "They said it is a sort of marriage video. There were 14 songs and the duration of the film was three and a half hours.” But the response did not deter Rajshri in any way, he said.

The film was adapted from Rajshri's own Nadiya Ke Paar (1982) which had starred Sachin Pilgaonkar and Sadhana Singh. Barjatya said that film had been successful only in the Bhojpuri and Hindi belt of Bihar, Uttar Pradesh and Madhya Pradesh. “That’s why it was in Sooraj’s mind to adapt it so that it becomes a universally appealing film," he said. "It had a powerful subject which was why it attained success in these regions.”

And yet the reach and acceptance of Hum Aapke Hain Koun..! came as a pleasant surprise for the banner. “We of course had expectations because Nadiya Ke Paar had succeeded immensely [in those states]. But we thought it might not do so well in places where Nadiya Ke Paar had succeeded. But it became a big success in those regions also. It is the biggest hit of our production house and historic for us,” said Barjatya.

Hum Aapke Hain Koun..! is about Prem (Khan) and Nisha (Dixit). Prem’s elder brother Rajesh (Mohnish Bahl) is to be married to Nisha’s elder sister Pooja (Renuka Shahane) and the two fall in love during the preparations for the wedding. However, Pooja’s tragic accidental death sees the families fix up Nisha’s marriage with Rajesh.

Speaking about the casting, Barjatya said Salman Khan was always in their mind after Maine Pyar Kiya (1989), Sooraj’s debut film as director. “Madhuri was keen to work with us because we had introduced her in Abodh (1984). Of course that film didn’t succeed, but it was her first. She also felt that if Salman is working, then she would like to come on board,” he added.

Talking about the limited initial release, Barjatya said they wanted to introduce optical stereo sound in India. “For Maine Pyar Kiya we introduced magnetic four track stereophonic sound. It was the first time in Indian cinema. So we thought of going for optical stereo sound, which is equivalent to Dolby. Only two theatres in India were equipped with Dolby then — Sterling in Bombay and Priya in Delhi.”

The production house wanted to release the film with Dolby sound, but that did not happen. “The Dolby people said Indian technicians are of no avail. We found out that their competitors were Ultra Stereo in Hollywood. They wanted to sell their equipment. We bought it from them and decided to release the film in Ultra Stereo. Only 29 cinemas came forward in the entire country,” he recalled.

But after the film was released in those 29 theatres, it became a huge draw. “Then we decided that whoever wants to upgrade their cinema can do it, but if they don’t want to, they can still screen our film," Barjatya said. "We ourselves fixed the machinery in two cinemas, Raj Mandir (Jaipur) and Maheshwari (Hyderabad), at our cost because we didn’t want to miss those centres.” 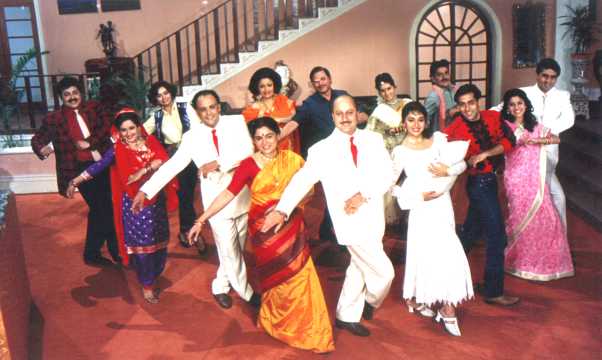 Rajshri wanted to release the film at the iconic Metro cinema hall (now a multiplex) in Mumbai and were ready to install the new sound system at their cost. “But they said we won’t allow you to touch any of our equipment," Barjatya said. "They were so stern about it. But Liberty [which is located a stone's throw from Metro] was interested, so they came forward.”

And, of course, the film went on to create history at Liberty. “For a whole year, the current booking window did not open at Liberty," Barjatya recalled. "The theatre always got full in advance.”

Sooraj Barjatya had reduced the film's runtime by 15-20 minutes, including two and a half songs, as it had appeared too long. But after the film completed a golden jubilee run of 50 weeks, Rajshri released the full version with two intervals. “My younger brother Rajkumar insisted we should release the full version,” Kamal Kumar Barjatya said.

In the 1990s, it was a norm for the official videocassette of a film to be released simultaneously with its theatrical release. However, the Barjatyas were opposed to this as they wanted people to see the film on the big screen. “For about six months we didn’t release the video," the managing director said. "By then a pirated version had come from Pakistan. So we thought now it’s okay to release the official video.”

The producers also issued a public request signed by the artistes and technicians who had worked on the film urging people to see it on the big screen. “You will find it in Film Information [a film industry magazine]," Barjatya said. "That also had a big impact at the box office. We felt that for establishing the theatrical release this [the video release] has to be avoided. After this, a lot of films started following the practice.”

The producers broke another norm and did not release the full songs on TV. Barjatya recalled that music label HMV had asked Rajshri to provide the full songs for the popular television countdown show Superhit Muqabla but they simply refused.

The producer also touched upon the overseas triumph of the film, which helped to open up foreign markets for Indian films. “It had a run of nearly 80 weeks in London’s Odeon Marble Arch, which is a prime cinema," he said. "They gave it a midnight show where they otherwise screened only English films. People used to come from far-off places. Not releasing it on video played a big part here as well. Even in Toronto [in Canada] it ran for 75-80 weeks. This film opened up the overseas market.”