As Sooraj R Barjatya's iconic film turns 25, actor Mohnish Bahl recalls his casting and some fond moments from the shooting of the blockbuster.

Bahl remembers his casting and other interesting aspects about Hum Aapke Hain Koun..! as the film turns 25 tomorrow (5 August). Also starring Salman Khan, Madhuri Dixit, Renuka Shahane, Reema Lagoo, Alok Nath, Laxmikant Berde, Satish Shah, Ajit Vachani and others, it is one of Hindi cinema's biggest hits of all time and is remembered fondly even today by the family audience.

Bahl recalls that he feared getting stereotyped as a villain after Maine Pyar Kiya but was saved by Barjatya’s Hum Aapke Hain Koun..!. “Soorajji gave me this role in Hum Aapke Hain Koun..!, which is so creditable for him as he thought he can introduce me in a completely different role. It was he who had seen me in a negative role and here he saw me differently. For me it became a big platform to show or be accepted as an actor with diversity,” said Bahl.

Revealing how soon he signed the film, he said, “I said yes even before listening to the script (laughs). There was no way I was going to refuse Soorajji. That was out of the question.”

Yet, the actor initially didn’t believe he was being cast as Rajesh. “After the narration, I asked him if he is thinking about the character of Rajesh for me. I was slightly doubtful about him casting me for such an important positive role when he had already cast me in a negative role. He said, ‘I feel you are not paying full attention. That is the role. What’s wrong with you?’ I was shocked to get a leading positive role,” Bahl recalled fondly.

The film saw Rajesh getting married to Pooja (Shahane) and his younger brother Prem (Khan) falling for Pooja’s younger sister Nisha (Dixit). However, Pooja dies accidentally and the family plans to get Nisha married to Rajesh, since she is already a motherly figure for Rajesh and Pooja’s infant child. 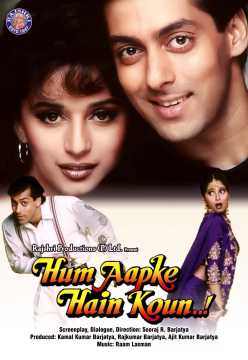 Bahl is delighted that the film is remembered even after 25 years. “Everybody is celebrating it, including the media,” he said. “It’s not an everyday occurrence. For an actor to be a part of this is a big thing. It has gone into posterity. When you talk about Indian cinema, it feels great to see your film’s name also being taken. What I like further is that it’s a nice and clean family film. Basically it’s the effort of the entire team led by Soorajji.”

Bahl added that he always marvels at Barjatya’s preparation and vision. “He is always so prepped that while narrating he presents the full film in front of you. This also includes background score, design of certain furniture and curtains. You get the complete vision of the film,” he said.

The actor went on to perform in Barjatya’s next film Hum Saath-Saath Hain (1999) where he also played a pivotal role as Prem’s (Khan’s) brother Vivek. He said he owes his career to the Barjatyas and Salman Khan and both have a special place in his heart.

But Bahl added that his friendship with Khan goes beyond Rajshri. “It’s an old friendship that started even before Maine Pyar Kiya," he said. "We are like childhood friends. [Working with Salman Khan] doesn’t feel like we have gone on a shoot. It just feels like we went to Bandstand [a popular hangout location in Bandra, Mumbai] and gave a shot.”

Recalling the experience of the shoot, Bahl added the Barjatyas looked after the entire unit, not just the artistes, as their own, inquiring if they had eaten or slept well. “It is more than business with them. You never feel like doing anything that might even give them the slightest trouble,” he said.

As the whole shoot was like a family outing, Barjatya had planned a thoughtful send-off for each actor. “They set up the last day in such a way that every artiste should have at least one shot. Whenever an artiste gave his or her last shot, he [Sooraj] would play the song ‘Phir Laut Aana Hai’. This was an emotional moment,” he recalled.

He also recalled the gesture of Rajkumar Barjatya, Sooraj's father and Rajshri Productions managing director who died earlier this year, during the shoot. “We had gathered for the first schedule in Ooty," Bahl said. "He introduced everyone to create a familiar atmosphere. Raj babu took the mic and said, ‘Our film’s name is Hum Aapke Hain Koun..! But always remember ki hum aapke hain.' In the last scene too, the word ‘Koun’ gets removed from the title.”