Ritwick Chakraborty, the male lead in Shantilal O Projapoti Rohoshyo, speaks about the protagonist's journey as well as about working with Pratim D Gupta and with Paoli Dam.

Actor Ritwick Chakraborty is on a roll. In August, the critically acclaimed and popular actor has as many as three films lined up for release — Pratim D Gupta’s Shantilal O Projapoti Rohoshyo, Raj Chakraborty’s Parineeta and Sudeshna Roy and Abhijit Guha’s Samsara. And before August, he has already had four other films being released — Nagarkirtan, Tarikh, Vinci Da and Jyeshthoputro.

Of all the upcoming releases, however, Gupta’s Shantilal O Projapoti Rohoshyo has been generating a lot of anticipation for the film is going to present Ritwick Chakraborty as a detective for the first time in his career.

Chakraborty plays Shantilal, a simple weather reporter who gets an interesting lead regarding film star-turned-politician Nandita, played by Paoli Dam, and turns into a detective while pursuing the story.

At the trailer launch of Shantilal O Projapoti Rohoshyo last month, Chakraborty shared his experience of enacting a detective for the first time.

According to the actor, “Shantilal is a common man, but he has all the intelligence and powers of observation that a detective requires. In the film, Nandita’s story brings him to face an incredible mystery that eventually inspires him to turn into a detective.”

In the beginning of the film, Shantilal leads a mundane life. “As a weather reporter, he hardly gets to live the adventurous experiences of a journalist. Hence, when he gets the lead of a mysterious story, he starts pursuing it and eventually solves it,” the actor explained. 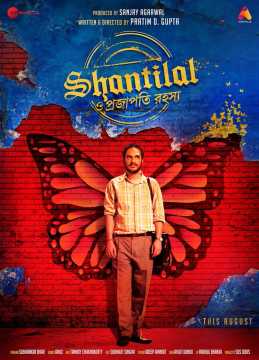 Much like his director, Chakraborty agreed that there is a detective in most individuals and journalists tend to have those traits in greater degree. “Those traits do not necessarily transform the normal characteristics of an individual," he said. "I believe at some point in our lives, we find our detective traits emerging. Similarly, Shantilal, in the film, remains the same journalist throughout his quest, but the journey increases his confidence and also of the people around in him.”

Incidentally, Paoli Dam has featured in two of Chakraborty’s previous films with Gupta. However, they were not really paired in Maacher Jhol or Ahare Mon (2018). In fact, in Maacher Jhol, they were hardly seen together on screen.

“Of course, we are a team, but I have not really been paired with Paoli before in Pratim’s films," Chakraborty said. "In this film too, you can see that I am a simple journalist while Paoli is a superstar. Hence, they do not really belong to a common platform. The chances of these two characters meeting are not quite there.

"However, life is uncertain and creates magic. Due to some magical coincidences, these two characters meet after their parallel journeys have run like two railway tracks for most of the film.”

Chakraborty thanked the director for always writing interesting characters for him, going beyond the tags of hero and heroine. “In this film too, we [he and Dam] are placed in an interesting dynamic,” he said.

Asked whether he, too, looks forward to doing a romantic film with Paoli Dam, as the actress said in an interview, Chakraborty responded, “I don’t care whether it is romance or any other genre. I want Pratim to write a brilliant story for us. In that film, if I have to kill Paoli, I wouldn’t mind that either (laughs)."

The actor believes the Bengali audience is almost always keen on watching detective and thriller films. While there is no dearth of detective characters in Bengali literature and cinema, according to Chakraborty, almost all of them have certain distinctive features that appeal to audiences.

“Similarly, Shantilal too has certain attractive traits” said the actor. “We know Pratim always presents unique stories that are quite unpredictable and the audience enjoys his storytelling. All I can say is that there are enough reasons to watch Shantilal O Projapoti Rohoshyo.”

Chakraborty said he gained some perspective on the world of journalism while working on the film. “As I was shooting for sequences in the newsroom regarding doing stories, I could see the world from an angle which was quite different from the interactions I have had with journalists,” he said. He added that Shantilal’s journey in the film is one of self-exploration, “The way he begins to discover himself in the film gradually is quite intriguing,” he offered.

Commenting on his three releases this month, the actor said, “Yes, there was a similar situation earlier in April. These releases don’t really depend on the actors and hence I am yet to figure out whether it is a positive or a negative aspect.”