The first-time filmmaker shares the long journey of making his debut film and narrates his experience of working with stalwart artistes.

Devayush Chowdhary’s debut film Adda (2019) is all set to hit the screens this September. A student of filmmaking at New York University, Chowdhary assisted Kaushik Ganguly on Aarekti Premer Golpo (2010) and Birsa Dasgupta on Jaani Dyakha Hawbey (2011). He also worked for a while with Rituparno Ghosh.

The first-time filmmaker has also worked in Mumbai and written for a few television series, before he decided to return to Kolkata and start working on his film Adda.

Adda, a slice-of-life drama, features Soumitra Chatterjee, Sabyasachi Chakraborty, Dipangshu Acharya, Indrasish Roy, Prantik Banerjee, Saayoni Ghosh, Sourav Das and many new actors and actresses. The film narrates the story of the city of Kolkata where the past and present co-exist, while churning out some questions regarding its decline and possibilities.

In a candid conversation with Cinestaan.com, Chowdhary shared the long journey of making his debut film and narrated his experience of working with some of the stalwarts of Bengali cinema. Exceprts:

Since when did you start conceptualizing the film?

I first conceptualized it back in 2011. Then I started writing the film in 2014. We have been making the film for the last two years, since 2017.

Has the process been a difficult journey for you as a debut filmmaker?

Yes, of course it was a bit difficult to start working on the film, but at the same time it was exciting as well. The concept is of an indie film, but we have given our best to make the audience feel that it is a big film when they watch it in the theatre. We have put everything in front of the camera. My team and I had to work very hard to achieve our goal for the past two years. It feels as if I have aged 10 years in the last two years.

What is Adda about?

It is about the concept of ‘adda’ [informal debating society] that we Bengalis are so genuinely fond of. It is basically about two angels called Black and White (Sabyasachi Chakraborty and Dipangshu Acharya), who come down to earth to decide what to do with humanity — whether to destroy it or retain it. However, when they land in Kolkata, they find out that nobody really does any work here; rather, all are engaged in their adda sessions.

Therefore, they decide to eavesdrop on various adda sessions and make their decisions. There are four or five narratives that come out of the adda sessions these two [Black and White] are listening to and all their narratives are interconnected in some way.

From the trailer, the concept of negativity and optimism that Black and White both represent seems to be closely related to certain quintessential traits of Bengali culture.

Yes, I have received the feedback from most viewers that the film seems to be highlighting Bengali culture. Honestly, I have not done that deliberately; rather, being a Bengali, the ideas came to me quite naturally.

I have heard of the general perception of Kolkata as a dying city. Through the film, I wanted to explore whether the perception is true, and even if it’s true, I wanted to look for the possibility of regeneration in the city. Yes, the city is more or less the central theme or character of the film.

Being a first-time filmmaker, was it difficult to approach stalwarts such as Soumitra Chatterjee and Sabyasachi Chakraborty?

Honestly, both of them are quite approachable. Being a newcomer and having no connection in the industry, it was difficult to reach out to them. However, I was fortunate that once they read the script, they found some potential and thought of giving the concept a try.

A film buff myself, I grew up watching films like Sonar Kella (1974). Hence, to meet them and interact with them [Chatterjee and Chakraborty] was as nerve-wracking for me as a kid of this generation might feel if they happen to meet Superman or Batman. Leaving that aside, from their end, it was quite a pleasant experience for me.

And how about the experience of directing them?

I would not say the same for the other actors, but when it came to working with Soumitra Chatterjee or Sabyasachi Chakrborty, honestly, I did not have the guts to direct them. Fortunately, they delivered exactly whatever I had conceived in my mind. That’s a huge bonus for me. 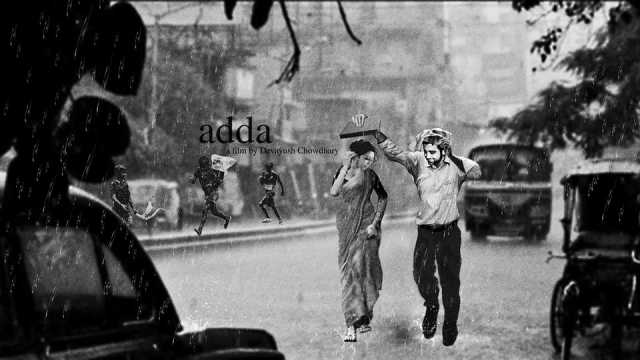 How did you cast the newcomers?

See, the director deals in all the departments, but for me the most exciting part was to work with the actors. We have had an interesting mix of actors. There are known faces like Saayoni, Sourav, Prantik, Indrasish, and there are raw new talents as well. We actually conducted auditions for almost a month one winter. We auditioned for 400 to 500 people and finally found the actors of our choice. It was fun and at the same time it took a lot of time. It was difficult to choose because Kolkata is filled with acting and musical talent.

Was it a struggle to find the producers as a debut filmmaker?

Yes, I think that struggle is common for all first-time filmmakers. However, I was quite lucky to get the financial aid. Apart from my own production house, Maxim Pictures, Reeldrama Productions is producing the film.

Your film has a refreshing approach. What should the audience expect from it?

I hope they find something fresh in my film. I think the treatment in Bengali cinema has reached a stage in which the audience does not know what to expect. Of course, there are masters in the industry, but I believe art and cinema by nature needs to evolve and the audience is not getting something challenging to watch these days. I am not saying that I have deliberately tried to attempt something new, but I have tried to present whatever has come out organically.

As I am new, I hope the audience will get something fresh to watch. I think, as per the treatment, the audience will be able to relate with the way the characters deal with the various situations they get into in the film. The dialogues that have been used are quite true to life. I tried my best to churn out as much meaning as I could from each and every line. The process was much more interesting for me, for my Bangla is not quite strong as I did not grow up in Kolkata entirely. Hence, I took two to three years to write the script in rhyme.