After Fatima Sana Shaikh, it's the turn of actor Vidyut Jammwal to get some recognition at the  Jackie Chan International Film Week in Datong, China. His family-action adventure movie Junglee (2019), directed by American filmmaker Chuck Russell, won the Best Action Sequence Choreographer and the Special Jury Prize for Best Action Family Film.

The Indian actor was at hand at the festival to pick up the awards in person. While accepting the award for the Best Action Sequence Choreographer, Jammwal stated, "Every time we choreograph something in India, it is very difficult because whenever we show it to somebody they say, 'Oh! Jackie Chan has done this before.' So, for us, it's a great honor for being acknowledged by the great jury members." 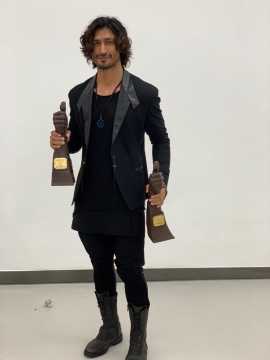 In India, we hadn't had a movie on real animals from the past 40 years. The new generation has no idea about the tusk trade that's happening all over the world. So for us, it was very important to make a movie for the generation to come. It is a great moment to get the jury award it means a lot to us. Thank you to Jackie Chan and all the Jury members. And most importantly, Thank you to the Chinese government for helping us and the whole world to stop the trade of ivory," he continued.

Like Shaikh, Jammwal too is a big fan of action star Jackie Chan and the actor was elated with the double honour at the festival. He also met up with Chan's Rush Hour (1998) co-star Chris Tucker at the festival.

‘ A day without laughter- is a day wasted’.. it was a joy meeting you Chris Tucker ⁦@christuckerreal⁩ - your energy and happiness is so real and infectious...waiting to host you here in India pic.twitter.com/IHpz76Y9pb