Films about climate are as important as a doctor to patients: Sanjay Mishra on Turtle


The versatile Sanjay Mishra, whose Rajasthani film, Turtle, is based on the story of a man fighting to save his village from drought, discusses the need for films to speak about climate change.

Sanjay Mishra's chameleonic ability to switch into roles is probably his greatest trait. But over the years, the actor has also evolved into a conscientious artiste, with a nose for stories that capture the social zeitgeist, its issues, and topics.

Mishra's latest, Turtle, recently won the National award for Best Rajasthani Feature Film. Inspired by a story by Rajasthani writer Vijaydhan Detha, Dinesh Yadav's film pursues a man trying to fight off the drought by bringing back a water source for his village in Rajasthan.

With Ashok Chaudhary backing the film, Dinesh Yadav has managed to make heads turn at several film festivals. But the film is still to find theatrical release in India. Speaking to Cinestaan.com, Mishra explained why making such films and getting the public to watch them is the need of the hour. Excerpts:

First of all, congratulations. Turtle won the National award for Rajasthani film of the year. It must have felt good that a small, niche film was recognized at that level.

Yes, the keywords here are 'niche film'. That is the issue. When a film like this wins an award, not a small or big film in terms of production value, but a film on the issue of drought. 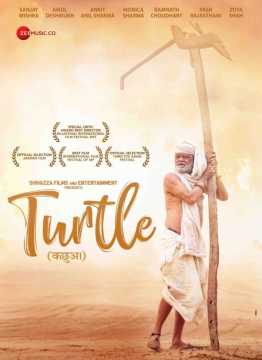 Turtle is one of two films I have done on the environment. Kadvi Hawa (2017) and this, Turtle. It feels satisfying that at least people who are selecting the awards have an eye on films that speak about such an important issue. It is not about Rajasthan, but for every place around India that is struggling with water scarcity.

How did the name Turtle come by?

Turtle refers to the person who is in search of water. He is trying to get water to his village. But like a turtle. His work is not at the speed of a lion but slowly, steadily, he accumulates and searches.

I didn't ask about the name, actually. I just liked it so much, but the motivation was the slow drive to the purpose.

I saw Kadvi Hawa in 2017 and liked it. It was a precursor to the climate change we see today, with floods on one side and water scarcity on another. How important is it for such films to bring these subjects into the mainstream and the limelight?

As important as a doctor to a patient. There is a need to understand the seriousness of the message. I was recently speaking to someone that we award films like these, government and National awards, but how far are we able to take these films to audiences? Both films have independent producers, individual people trying to make films on water, air pollution, and climate change. They are not trying to make just any film, but a film that gives back something to society. To help people like these, not by making a Rs200–400 crore film but just something to help the film recover, and get the message noticed.

Kadvi Hawa, for instance, it would have been good if the government had allowed screenings in schools, because it is the issue of today. It is a bigger issue than [Article] 370, the floods and droughts of today. At least we need to educate people about these changes that will affect their lives.

In such times, what is the responsibility of the artiste? Producers are doing their bit, stories are coming out, but what else needs to be done to bring more attention to these subjects?

To reach the audience, you need quite a lot of money these days. These films that we talk of will be released in 4–5 theatres. Kadvi Hawa gets one show there. There is very little the actor can contribute to. He/she can only accept to do the film at a lower price, as their contribution to society. I am doing this film for the society in which I live, that gave me a good life, and it is my responsibility.

An artiste can only contribute that. I don't have the money to get this film screened in every theatre. I am a very small person.

It is an interesting phase for you. On the one hand, you are part of commercial projects like Total Dhamaal (2019), and on the other, films like Turtle and Gwalior. How has it been?

This phase balances things for me. My audience makes my films commercial for me. These independent films give me creative satisfaction. I have to sit down and think how I have to depict this character or the story. These films depend on me, while commercial films only have me as part of the machine.

So far the film has been travelling to festivals. Any news of a theatrical release?

Well, as I have been saying, the film is backed by independent producers. They have put as much money as they can into making the film. Now, slowly, as it goes around and people notice it, they might take it forward. Let us see how it goes.