The writer recalls how he fleshed out the characters and storyline of the entertainer starring Abhishek Bachchan, Uday Chopra and John Abraham.

The Yash Raj Films banner was mostly associated with emotional stories, whether in the genre of romance or family entertainer. But the banner began a new chapter in 2004 with the action entertainer Dhoom (2004). Starring Abhishek Bachchan, Uday Chopra, John Abraham, Esha Deol and Rimi Sen, the film, directed by Sanjay Gadhvi, was a cops-and-robbers saga that also featured high-end sports bikes prominently for the first time in Hindi cinema.

It was producer Aditya Chopra who came up with the basic story. The idea was completed by writer-filmmaker Vijay Krishna Acharya who fleshed out the screenplay and dialogues. Acharya also wrote the sequel Dhoom 2 (2006) and went on to write and direct Dhoom 3 (2013), which saw Aamir Khan play a thief.

As Dhoom completes 15 years today (the film was released on 27 August 2004), Acharya recalls the process of writing a film which was unconventional and experimental for YRF back then. Excerpts:

How did Dhoom happen for you?

Sanjay Gadhvi had an assistant, Mayur Puri, who asked me to meet Sanjay and said there are some films that Adi is thinking about. We met and discussed a different project. Then I met Adi and one morning Sanjay said they want to make one film quickly. The one I was writing would have needed longer time to prep. They were planning to do this film with a bit of action. After some thought I decided to swing in. 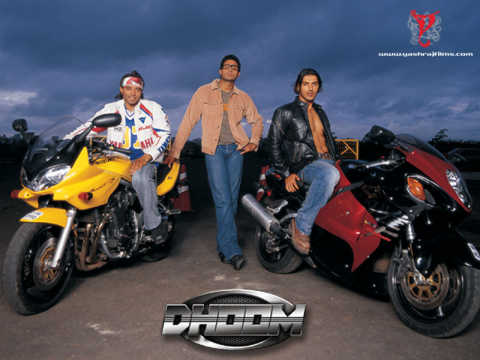 The process of writing was very enjoyable. It was largely between Adi, Sanjay Gadhvi and me. We weren’t thinking of the audience or this and that. The energy behind the first Dhoom was slightly irreverent and that irreverence is what I think saw us through. We were making a light-hearted film. We were not taking ourselves seriously. It had bikes. None of the actors were superstars. So, yes, it’s a big thing in my career, though one never thought about it at the time. It did change me and allowed me to actually engage with what I had come to this city to do, which was to make films.

Aditya Chopra thought up the story. But how did the idea originate?

The idea had come from Adi, which was about cops and robbers. What he had [in mind] was that there is a cop and there are these robbers who are robbing in new ways. We didn’t have more than that, but what we knew was that we needed some energy and bikes. To that extent he foresaw something which none of us did in the room did.

What was the brief given to you?

I am attracted to the Western. I like caper films. I am a big fan of films like Rififi (1955) and The Italian Job (1969). Having said that, once you start working you find something which resonates with you culturally. What we were trying to do was to create a screenplay which was closer to a Manmohan Desai screenplay. By that, I don’t mean in its fantasy. If you look at Manmohan Desai’s screenplays, they are always moving. Something keeps asking for your attention [all the time]. Either it’s an action sequence, a song, a dramatic scene or a love story. 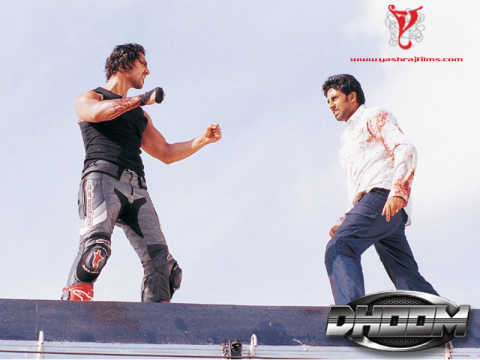 I think Dhoom as a franchise also owes a lot to, of course, the team and the energy. I feel fortunate and also responsible for creating it. But I think what Adi at that time took was an extremely brave and unconventional step. When the film came, nobody could think it’s a Yash Raj film. I saw the trailer of the film at Fun Republic. Some college students were sitting two rows behind. One of them said we should see this film. It spoke to a younger audience. It was a different audience from what we understand as the traditional YRF audience.

What Adi was sure of was to not lean on whatever were the pillars of Hindi films of those times — drama, romance or a deep emotional connect. There is no emotional connect in Dhoom and it was a conscious decision. It was a landmark because it didn’t have these things. And this freshness appealed to the audience.

The funny give-and-take between Jai (Bachchan) and Ali (Uday Chopra) is one of the highlights of the film. They became an unusual pair with unusual chemistry. How did you go about creating these characterizations?

Hollywood has these buddy-cop films. We have not had that. But we have had a lot of Amitabh Bachchan and Vinod Khanna films. Jai and Ali are like chalk and cheese. One is a very committed cop who is serious. The other is a mechanic who is totally a fish out of water in this world but has some native wit. Maybe I liked it personally so I flew with it. Thinking of it now, it didn’t seem challenging to me.

Humour was always very important. I personally like humour in writing. I feel that not having a sense of humour is probably the worst thing that can happen to you. Like Jai has a very dry humour. Ali had the tapori [street-urchin] humour. Personally for me, at least in Dhoom, Ali became almost the soul of the film because he is rooted and funny. Kabir’s (John's) humour was a little darker. In the film I didn’t give him anything funny except for his conversation with Jai where he matches him in wit.

How challenging was it to decide the climax? You had to show the good guys winning, but at the same time also maintain the dignity of the villain.

What we had in our heads is the fact that it wasn’t a hero-and-villain film. It was a hero film. We looked at all three characters as heroes. The dignity of the anti-hero, which was John’s character, was always very important.

In Hindi films we as viewers had got bored of seeing evil dons and malicious characters. It also doesn’t feel life-like. I think what we wanted to create was this really cool anti-hero. Your loyalty as a viewer should be divided between the person who is on the good side and at the same time the guy who is on the bad side is also genuinely true and attracting your attention; he actually had some cool vibes.

It’s like a Mammohan Desai type of line to say that you will never be able to catch me. But we inevitably see that in the end of a Hindi film the cop always comes and says I caught you. So, I think we managed to get a little bit of that. If you look at all the three Dhoom films, there is a certain impact that the dialogue always has. One of my favourite scenes used to be after Jai has caught Kabir in the Goa hotel and the walk they are taking. It was kind of cool. I think all of that came, perhaps, because of the little bit of Western sensibility that we had but it was all put in a Hindi film.

Like you said, it was an unconventional and experimental film for YRF at the time. So how much were you people thinking about its box-office prospects?

There is something very beautiful about your first film. I come from a tradition where honestly I know that the box office is important. But both as a writer and a filmmaker, I want to say that the commerce of the film is always the by-product. It’s never the intent. Even though this was a mainstream film and Adi must have thought [about the box office], I don’t remember ever thinking what’s going to happen because we had a great ride writing the film.

How important has this film been to you, considering it is your first?

Personally, it’s a point of departure for me. I was doing TV before that and I was quite happy. I used to do more stuff for children. I started off with Just Mohabbat, then Sonpari and then I became the creative head of Shaka Laka Boom Boom. I did two things that year — Jassi Jaisi Koi Nahin and Dhoom — and both ended up being creatively very satisfying. Dhoom happened quite accidentally. Most of my life has been a series of accidents.

When was it decided to turn this into a franchise? Did you ever think of the possibility of a second part before the release of the first film?

Again, the thought came from Adi first. To tell you the truth, he saw the potential of a sequel much before any of us did. Within the first week of release, Adi was sure we should make a sequel. Actually he was sure before the release of the film, but he said he just needs to see how it does till the first Tuesday. So we started work on Dhoom 2 quite soon.

You went on to direct Dhoom 3, which was very different from the first two films.

If we had done another film like Dhoom 2, then we would have probably fallen prey to the idea of a franchise. Today I feel that if tomorrow we have to do another Dhoom, the audience won’t have any pre-conceived notions, except that it will be about cops and robbers and there will be action. I would humbly like to say that in Dhoom there’s this slight difference. It’s not Fast And Furious; it’s not about five guys trashing cars.

Now that you have mentioned, is there any chance of Dhoom 4?

It’s classified, so if I tell you I will have to kill you (laughs). Well, there is nothing in probably right now. But if you ask me, yes, there should be another Dhoom. When the story chooses us, we will be ready.