The actress said she worked the hardest for her next film, which is due to be released on Diwali.

In the Independence Day release Mission Mangal (2019), Taapsee Pannu plays a scientist who heads navigation and communication as part of a team that sends a space probe to Mars from India. For her next, Saand Ki Aankh, the actress digs deep to play her toughest role yet as a sexagenarian shooting champion, Prakashi Tomar.

During promotions for Mission Mangal, Pannu said the Diwali release, directed by Tushar Hiranandani, would see her play her most difficult character so far. Asked by Cinestaan.com if Game Over’s Swapna was the toughest character she has played, Pannu disagreed.

But with Saand Ki Aankh, she said, she “sweated a lot for that role” and underwent training for the language, body language, and physical sport of shooting. It was a lot of stress for her and raised her anxiety levels.

Pannu went on to say that this method of preparation works for her, as she hasn’t had any training in acting. “I have to psych out myself to make myself believe I’m [the character]. How else do I perform?” she explained.

That said, she actively went out and pursued the part simply because it was a two-heroine project. Pannu stars in the film with Bhumi Pednekar, who plays Chandro Tomar, Prakashi's sister-in-law and fellow shooting champion.

“Basically, I was intrigued with the idea of seeing multiple female heroes, not just supporting cast but main leads. I said, if no one is doing it, I’ll only do it. Saand Ki Aankh ghoomti hui aayi thi, aur Mission Mangal mujhe dhoondti aa gayi, so I said yes. My fascination has been satisfied nicely by these two films. I don’t think any of us has any insecurity, for that matter. We all know we do good work ourselves, and if the film’s script is good, then everything will fall into place. If the script is bad, then no one will like it,” Pannu said frankly. 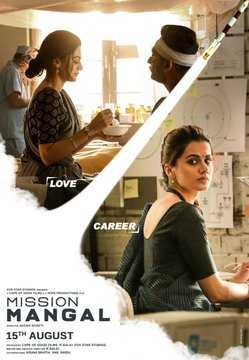 In the past few years, the actress has been fortunate to get good, relatable roles. “I feel I am like any other average Indian girl and I largely do those kind of characters on screen, average Indian girls. I don’t get aspirational, diva-ish characters, nor do I do them. I think that has become my biggest strength, that the regular audience associates with me rather quickly, that they feel, oh, she’s one of us. I think that has worked well for me.”

The actress also shared that she is keen to work with all kinds of artistes and does not look to work with big-name co-stars only.

“There are some actors, you look at their work and think, 'Will I be able to act properly in front of them?' I’m not intimidated by stars, I’m intimidated by good actors, which I felt during Mulk (2018),” she said.

After Saand Ki Aankh, Pannu will be seen in another Tamil film, Anubhav Sinha’s next project that is tentatively titled Thappad, and another supernatural thriller, this time with Anurag Kashyap.

“It’s releasing on Women’s Day for a reason,” she said of Thappad. “It is a woman’s point of view in a scenario. Not only me, there will be lots of other women [in the film] who will have different viewpoints. I can’t define that film so I can’t say what the film is.”

But for Mission Mangal, which was a lighter role for the actress, Pannu has gained a reputation of taking on intense parts. Despite the hard work, she has no regrets.

“What do I do when I hear a good script?” she exclaimed. “I can’t say no. I have worked really hard to achieve a level where I can choose from good scripts. Now when they come, I have become greedy and don’t want to let them go to someone else. That’s why I grab them. But meri band baj jaati hai.”