How Khayyam got Razia Sultan back from Laxmikant-Pyarelal


Moody, arrogant and supremely talented, Khayyam is one of the greats of Hindi film music. Yet, the composer was not always the first choice for films, not even for Kamal Amrohi's historical epic Razia Sultan. 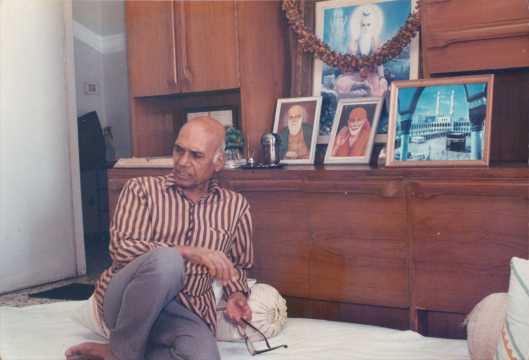 Silence is a very effective tool in music. Its understated presence infuses beats, rhythms and ragas with the defining life. And no other music composer in Hindi cinema has used silence as effectively as Mohammed Zahur Khayyam Hashmi, or, simply, Khayyam.

A composer of beautiful and timeless classics, Khayyam arrived in Bombay during the heyday of the first music composer duo Husnlal-Bhagatram and another maestro, Naushad.

Unlike poet-composer Naushad, however, Khayyam was an idealist. This explains his close connection with poets like Sahir Ludhianvi, Kaifi Azmi and Jan Nisar Akhtar, for whose verses he produced some of his best works. His idealism also set him apart in an industry where kowtowing to the powerful and successful and sycophancy are considered necessary qualities for survival.

This idealism did not come without its costs. Over a neary 60-year career, Khayyam is credited with just 327 songs in 50 films. Quite a meagre statistic for someone who began composing music way back in 1953.

But statistics paint an illusory picture. Khayyam's abilities can be judged by the fact that he carved a niche for himself in an era of maestros like SD Burman, Madan Mohan, Shankar-Jaikishan and the emerging Laxmikant Pyarelal.

In fact, what many considered his pride and arrogance was often simply his idealism. In an interview, the composer narrated how he risked bad blood with Raj Kapoor for his peers, Shankar-Jaikishan.

In an interview, Khayyam narrated the story of the tiff. At an informal lunch at the showman's place, he noticed Raj Kapoor ignoring Shankar and Jaikishan completely. Khayyam recalled, "Before sitting at the table, Rajji excused himself to wash his hands. Jagjit [the composer's wife Jagjit Kaur] pointed out to me that Jaikishan had turned pale watching Rajji get close to me... Immediately, I walked out without informing Rajji and Krishnaji [Raj Kapoor's wife]. Although I needed work at that time, I didn't want to deprive Jaikishan of his films. Shankar-Jaikishan were composing music for RK Films then. Rajji was angry with me for walking out, he never asked me to compose music ever again."

This incident has its parallel in another of Khayyam's masterpieces, Razia Sultan (1983). Upon hearing Khayyam's composition 'Parbaton Ke Pedon Par' from the film Shagoon (1964), Kamal Amrohi was bent on getting the composer to work for him on his long-delayed project.

However, Khayyam's obligations and the producers' insistence forced Amrohi to turn to Laxmikant-Pyarelal, who were then ruling the charts. It would have stayed that way had the music director duo not ignored the pride in their director. Not liking the pace of one song, Amrohi asked L-P, as they were known, to prepare a slower number.

Upon arriving at their office, the famed director of films like Mahal (1949) and Pakeezah (1972) found himself having to wait for an hour. Enraged at the perceived insult by his juniors in the industry, Amrohi stormed out and offered the project back to Khayyam. Offending the auteur is never the best way to charm the muse, as Laxmikant-Pyarelal learnt.

Razia Sultan became one of Khayyam's finest works after Kabhi Kabhie (1975) and Umrao Jaan (1981). The grand style of the film and its cultural milieu was reflected in its music as well.

Khayyam's composition for the album consists of an eclectic mix of influences from Hindustani classical to Persian and Rajasthani folk. The song, 'Aye Dil-e-nadaan', based on one of Mirza Ghalib's ghazals and written by Jan Nisar Akhtar specifically for the film, was a huge hit. It was exemplary of the lyrical musical quality that made Khayyam an artist among artists.