Sinha's co-star and friend recalls how he first met the actress and the days when a 'parallel' cinema was emerging.

Actress Vidya Sinha, who died on 15 August aged 71, was known for standing out while playing the regular woman-next-door. In fact, this became her USP at a time when glamour was considered the important ingredient for an actress to become popular.

Vidya Sinha impressed the audience and critics in her debut film itself, Basu Chatterji’s Rajnigandha (1974). It was also the Hindi cinema debut of Amol Palekar. The film also starred Dinesh Thakur. During the making of this film, Sinha and Palekar became good friends and remained so until her death.

Speaking with Cinestaan.com, Palekar recalled the moment he first saw Vidya Sinha. “We met for the first time at Basu Chatterji’s house in Worli," the veteran actor-filmmaker said. "The other person was Dinesh Thakur. He had already appeared in films like Mere Apne (1971). So he was senior to us.”

Palekar and Thakur had a great equation because of their theatre background. Interestingly, both had played the same character in the play Aadhe Adhure in Mumbai and Delhi, respectively. Chatterji asked him and Thakur to make Vidya comfortable through rehearsals and workshops.

“We are talking of the early 1970s," he said. "At that time, concepts like workshops, preparing the actor before the shoot, etc, weren’t there at all. We were asked to do that because we were from theatre while she was untrained. We agreed and used to meet everyday at his [Chatterji's] house. We used to rehearse and play some games, like we do in theatre.”

Sinha and Palekar's friendship developed while filming in Delhi where they shot for a long time. “It got extended in Chhoti Si Baat (1975) [Chatterji’s next film]. Then even after I stopped acting, I continued to be in touch with Vidya and meet her frequently. I am very happy that I am in touch with most of my heroines and co-stars,” said Palekar.

Rajnigandha became a hit though it was not like the mainstream commercial fare of the era and had two newcomers in the lead. “Rajnigandha was the first success story of parallel cinema," said Palekar. "I was just going through an ad somebody sent me of the silver jubilee of Rajnigandha. It is so rare for a non-mainstream film to run for 25 weeks!”

A memorable moment for Palekar was when he had lunch with all his leading ladies — Vidya Sinha, Zarina Wahab, Deepti Naval and Bindiya Goswami — around a year and a half ago. “Of course, Sandhya was there, my real-life heroine,” he quipped. “There was a lot of chat and catching up.”

The reunion became more memorable when Palekar decided to call up Basu Chatterji, who wasn’t keeping well at the time. “I called and asked, can I disturb you for some time? He said it would be a pleasure. So I took all these young ladies and we gatecrashed on Basu-da. He was overwhelmed. We spent about an hour with him. That was one of the most memorable moments with Vidya,” said Palekar.

The artiste also recalled the time when he had bought a bungalow at Juhu in Mumbai and called his co-stars over. “Vidya was the first to arrive," he said. "She came pretty early. She wanted to see my house. She went around and said she was so proud. She also stayed back for the party.” 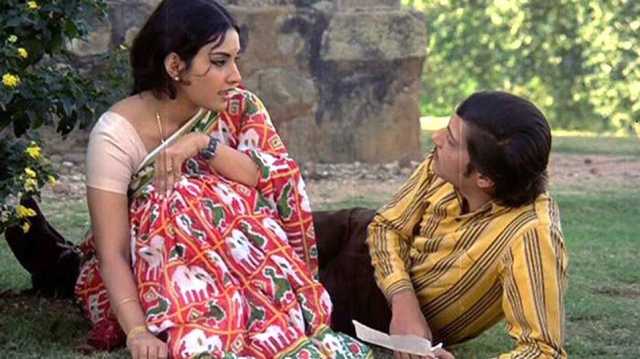 When Sinha shifted to Pune for few years, she and Palekar, who had also moved to the city, used to catch up often. “We were regularly in touch," said the veteran. "It’s a great loss of a very good friend. I will miss such a wonderful soul always.”

Speaking about Sinha’s performances, Palekar said, “She had a lovely presence to begin with, which is most important. It was a very pleasant presence. You felt nice in her company. She had this wonderful warmth. And of course her bewitching smile was her trademark.”

The emerging parallel cinema was more natural, less melodramatic, and in keeping with that the working style of the units was very 'non-filmi' and simple, Palekar said. “On the sets, Basu-da would ask me for a suggestion or I would suggest something to Vidya. Like the little thing she did to her pallu [the part of the sari that is draped over the shoulder] which she didn’t even know she did. So that was the kind of give-and-take and how we used to work.”

Palekar also recalled another delightful moment the two shared five years ago: “One moment I remember very fondly is when I held my solo show of paintings in 2014 in Mumbai. Vidya had visited and I had made her portrait there at the gallery itself. I presented it to her as a gift. She was so touched.”