The filmmaker also makes his acting debut in the short film.

Filmmaker Vinay Jaiswal has made his acting debut with his short film Cheetiyaan, based on the communal divide between Hindus and Muslims. His previous shorts include Jai Hindi and Homecoming, which starred Taapsee Pannu.

Getting the confidence to act was a gradual process for Jaiswal. “Acting has always been inspiring and the craft is extremely challenging," he said in a statement. "Why I thought of acting was because I wanted to express myself with the craft.

"It started with writing and directing, I started doing voice-overs in my films and commercials, then explaining to actors on set how I was looking at creating a particular character. People on set kept saying I can actually act well. One day, I decided to look at the craft from the other way round and try to experience it.”

Jaiswal said the subject of Cheetiyaan had been in his mind for a long time. He wanted known actors for it but things weren’t working out. Finally, he thought of casting himself in it. 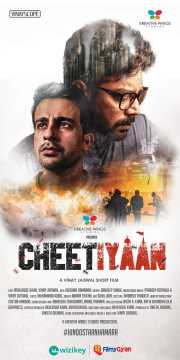 Speaking about the subject, he said it came to him during a conversation about the religious divide with his friend Maddy, a Muslim. “He, being a religious Muslim, told me a few things which I agreed or disagreed with and vice-versa. I remembered hateful things being fed and drilled in my mind as a child and the same was true for him. That’s how we thought of this concept. The uniqueness is how people create big differences and divide themselves over the smallest of things,” the filmmaker said.