This mission had equal contribution from men and women: Vidya Balan


Vidya Balan shared her views about the changing roles for actresses in the Indian film industry, her latest release Mission Mangal, and the continuing issue of pay parity.

While her interaction with journalists in the run-up to the release of Mission Mangal was on, Vidya Balan’s co-star in the film, Taapsee Pannu, interrupted her (she was simply returning the favour), gave her an affectionate hug, and proclaimed that they were going to do a film together soon, much to Vidya’s delight.

Pannu had said that when she was starting out as an actress, Vidya’s films like The Dirty Picture (2011) and Kahaani (2012) inspired her and told her that an actress could be the hero.

“I’m very flattered she said that,” Vidya responded. “It feels lovely when people give me credit like that, but I’m grateful that I was at the right place at the right time because I think that change was underway, and I became the face of that change.”

The actress said she was full of gratitude for the career she has had so far and thanked her parents for providing her with the self-belief that has carried her through.

“When I entered at 26, normally that was the age at which actresses were packing their bags and getting married,” she said. “Today, I’m 40, it’s been 14 years and thank god for that. I think it’s because of that self-belief that I think my career is going to last [as long as] I am alive. That there will be roles for me at every point of time, as long as I want it to happen. I have always been the most important person in my life, so I think I was okay with playing hero on screen.”

The award-winning actress went on to say that she puts out what kind of work she wants to do and when she gets the opportunity, she grabs it.

Vidya went to discuss the kind of roles available for older actresses like Neena Gupta, who put out a call for work on social media, and said the landscape was changing to accommodate them.

“Women have also thought of their lives as coming to an end, one or two generations before us, with children [and] marriage, especially by the time they hit 40, sometimes even 35. But all that is changing, our lives are not stopping. Our careers go on. We are, of course, getting married if we want to, we have children if we want to, but we are living the lives we want to,” she explained.

"What is amazing is that she put that out and there was a response to her desire or need to work and how much. Every day on Instagram, I’m seeing her post about a different film. More power to her!” she said. 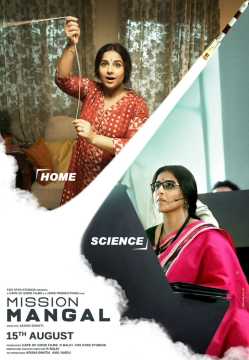 The actresses all play scientists of the Indian Space Research Organization (ISRO), albeit fictionalized for the big screen. Vidya’s character is Tara Shinde, the project director.

When the first poster was released, there was some criticism online about the film needing a male star, Akshay Kumar, to hold it together. 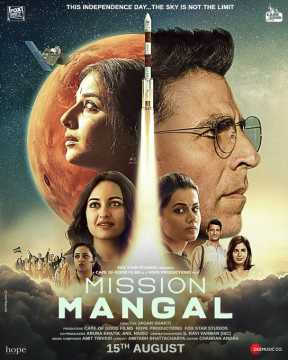 “But this is not only about the women,” Vidya argued. “This mission had equal contribution from men and women. It’s great that at least the women’s contribution is being acknowledged. It’s not fair to say that we need an Akshay Kumar. It’s great that Akshay Kumar has done this film despite the fact that women have equal space, because normally they are not even sharing equal space.”

Akshay Kumar, who is also a producer on the film, has an equally prominent role as the rest of female artistes in the film, according to Vidya. Again, when the issue of pay parity was brought up amongst actors and actresses, the actress had little to complain.

Moreover, the actress explained, at the end of the day, it is the business of cinema and when the audience goes for a film, it usually names the male star over the female.

She suggested that women would command equal pay “when women start playing equally prominent roles in those films, [and] when audiences come in to watch them equally, and it matters who the heroine is. In very few films that these superstars have done, the female lead has mattered. Where they have mattered, they have got paid, I hope, well,” she said.