The film is the remake of filmmaker David Dhawan's own Coolie No. 1 (1995), which starred Govinda, Karisma Kapoor, Kader Khan and Sadashiv Amrapurkar.

Varun Dhawan’s avatar as a coolie in David Dhawan’s Coolie No. 1 is out. The film is the remake of senior Dhawan’s own Coolie No. 1 (1995), which starred Govinda, Karisma Kapoor, Kader Khan and Sadashiv Amrapurkar.

In the first poster, Varun is wearing the typical red uniform of a coolie. His expression, in which he is yelling out something, indicates that the film will be a madcap comedy. The poster also mentions that this is filmmaker David's 45th film. The second poster sees Varun bonding with his co-star Sara Ali Khan. Both posters were released on Khan's birthday, 12 August, which is also the Eid holiday this year. 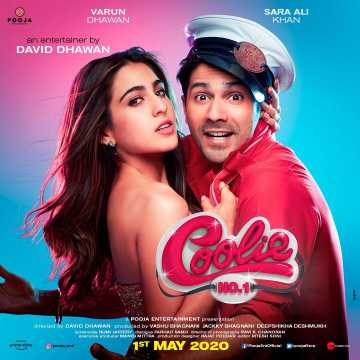 The remake is also produced by Vashu Bhagnani’s Pooja Entertainment, just like the original. The film brings back the hit combination of David and Bhagnani after 10 years. Their last film together was Do Knot Disturb (2009) starring Govinda, Sushmita Sen, Sohail Khan, Riteish Deshmukh and Lara Dutta.

This is the second time that David is remaking his own film with his son Varun after Judwaa 2 (2017), which was based on his own film Judwaa (1997) starring Salman Khan and Karisma Kapoor.