Revealed! It's Vicky Kaushal as Sardar Udham Singh in Shoojit Sircar’s next


The film is based on Udham Singh’s act of assassinating Sir Michael O’Dwyer, the former lieutenant governor of Punjab who had approved General Dyer’s Jallianwala Bagh massacre of 1919.

April 13 marked 100 years of the tragic Jallianwala Bagh massacre. In its centenary month, the makers of the upcoming film Sardar Udham Singh have shared the first look of actor Vicky Kaushal from the film directed by Shoojit Sircar.

The film is based on Udham Singh’s brave act of avenging the massacre by assassinating Sir Michael O’ Dwyer, the former lieutenant governor of Punjab who had approved General Dyer’s action of carrying out the Jallianwala Bagh massacre of 1919.

The makers have shared a couple of Kaushal's pictures from the film’s shoot in Europe. One of them shows the actor giving an intent look while standing on a street that looks like London with an iconic double decker bus in the background. The second shows him with Sircar. 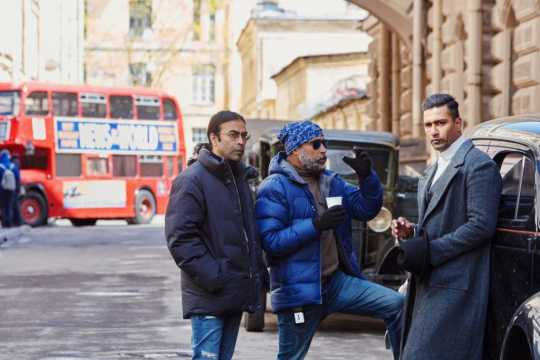 Sharing the reason for choosing this story, Sircar said in an official statement, “I chose this event as it is one of the most pivotal revolutionary contributions to the freedom movement which has albeit gone unnoticed for generations.

"Udham’s struggle and sacrifice is a very important story for today’s audiences to be made aware of, and I have collaborated with my esteemed writers Riteish Shah and Shubendu Bhattacharya, along with my friend and producer Ronnie Lahiri, once again for this humble tribute to the maverick freedom fighter and his story.”

Speaking on choosing Kaushal, he added, “Vicky is unquestionably one of the most dynamic actors we have today, and together we shoulder great responsibility to deliver due justice in bringing alive this inspiring story on screen.”

Sardar Udham Singh will be released in 2020.