My personal life wasn’t personal any more: Rinku Rajguru on 3 years of Sairat


The teenage actress looks back at the Nagraj Manjule blockbuster that changed her life forever.

There was a good deal of buzz around Nagraj Popatrao Manjule’s Sairat (2016) before the film was released on 29 April three years ago. This was his second film after the acclaimed Fandry (2014) and it was also expected to do well.

But what happened after the release was beyond unprecedented. The buzz turned into excitement which was reflected in the film’s box-office collection.

At a time when it was considered a big deal for a Marathi film to make even Rs25 crore at the box office, Sairat went on to earn over Rs85 crore, particularly when it was also released in cities and towns outside Maharashtra.

The film’s entertaining content, the superhit music and the moving love story of Archi (Rinku Rajguru) and Parshya (Akash Thosar) worked wonders. But what played a pivotal role was the haunting climax. The film also ensured that Rajguru and Thosar, who acted very well in their first film, became overnight stars.

With the film completing three years, Rajguru looked back at Sairat while speaking about her latest flick Kaagar during an exclusive conversation with Cinestaan.com. 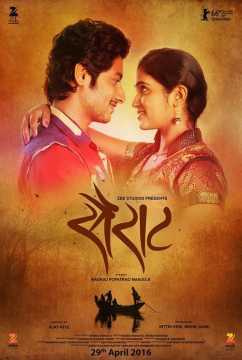 The young actress had obviously not expected such enormous success and fame. “I felt very happy,” she said. “When my parents were watching the film, they were crying. Any mom and dad would feel this way. Like, such a young girl hailing from a village who hasn’t seen the world is suddenly being recognized everywhere.”

Speaking about the sudden stardom, she said, “Even today I feel happy when people meet me with love and appreciate me, chat with me. I feel very good to keep meeting new people all the time.”

The astounding success of Sairat also meant that Rajguru was constantly in the media glare. When her tenth standard board exam results were out in June 2016, a few news channels and publications went so far as to display her marksheet and even analyse it.

Looking back, Rajguru feels her personal life wasn’t personal any more after the film. “Apart from showing my marksheet, journalists used to turn up at my centre during my [twelfth standard] exams and insist on bytes," she said. "But I guess that is a different kind of love from them. So I am just enjoying it. Sometimes I also watch it as an audience thinking oh, so today it’s Rinku Rajguru’s result (laughs).”

It was an obvious question to ask her why of all the films offered to her after Sairat she chose Makarand Mane’s Kaagar as her second project. “I was eager to return with a good subject," Rajguru explained. "I wanted to do something that will also give a message. I saw all this in Kaagar. I was offered a lot of films in these three years. Many of them were like Sairat. But I didn’t want to do Archi again and didn’t want to do the same type of film again.”