Thalaivi is my ticket to be accepted as a pan-India filmmaker: Director Vijay on the Jayalalithaa biopic

Director Vijay, best known for films such as Madrasapattinam (2010) and Saivam (2014), has been making films at breakneck speed. In the past two years, he has managed to have five releases and, irrespective of the results of these films, he seems to be in no mood to slow down.

As he gears up to commence work on the much-hyped Jayalalithaa biopic Thalaivi, starring Kangana Ranaut; Vijay opened up on what would be the experience of making a film which would make him a pan-India filmmaker.

In February, on the occasion of the 71st birth anniversary of the late J Jayalalithaa, the film star who became chief minister of Tamil Nadu four times, it was announced that Vijay would direct a film on her life. With the project set to go on the floors in a few weeks, Vijay said there is a sense of responsibility when it comes directing this project. 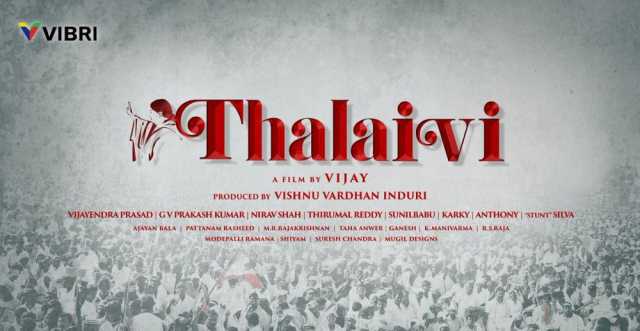 “When producer Vishnu Induri approached me with the offer to direct this biopic, I didn’t have any second thoughts. In fact, I felt a sense of responsibility more than excitement. This is a story of an achiever; a story of a woman who fought for her place in a male-dominated world. I had to be sure I can do justice to her story because she still means a lot to millions of her followers. It was meant to be told with honesty. The stature of this tall leader and her courage inspired me to say yes as soon as I was offered this opportunity,” Vijay said, recalling how the project materialized.

When it was announced that Kangana Ranaut had been signed on to play Jayalalithaa, the news took many by surprise. Many on social media wondered why a Tamil actress could not be roped in to play the former Tamil Nadu chief minister instead of relying on someone from Hindi cinema.

“As a leader, Jayalalithaa was never confined to one region," explained Vijay. "She was popular on the national level and even outside Tamil Nadu people knew who she was. Therefore, it made sense to cast someone who has a pan-India market and popularity.

"It had to be one of the biggest stars. Therefore, we opted for Kangana and she was really excited when we approached her. She is willing to learn Tamil and even undergo a month-long workshop before we start shooting. We are making an honest biopic.”

It took over 20 drafts for Vijay to lock the script. These past few months have been exhausting in terms of research and writing. “The entire research took us months. Never have I done so much research for any of my films," the director admitted.

"As part of the research, we found a person who has a collection of all of Jayalalithaa’s interviews. Through those interviews, I learnt a lot about our state’s history and politics in general. I don’t think I would have learnt so much if I spent time reading books. This was more like a ready reckoner which I could use whenever and wherever I wanted.

"Thanks to the research, today I can talk about the history of Tamil Nadu politics for hours. I know all the important dates and milestones,” said Vijay, confirming that the shooting will commence in July. “This will be a big film and scale-wise it could be 10 times bigger than Madrasapattinam.”

Baahubali (2015, 2017) and Bajrangi Bhaijaan (2015) writer KV Vijayendra Prasad will be overseeing the writing process for the film. Vijay is thrilled to collaborate with Vijayendra Prasad, arguably one of the best screenwriters in the country today.

“It’s an absolute honour to be working with him," the director said. "It is through his experience that we will be able to do justice to this biopic as it will deal with history and how we present it matters a lot. He has brought so much respect to writers. I see this as an opportunity to learn from him and unlearn wherever needed. It was he who brought Kangana on board after their successful collaboration in Manikarnika (2019). I believe his involvement will add magic to this project.”

As he prepares to begin shooting the biggest project of his career so far, Vijay isn’t disappointed by his recent form. His last four releases, including the latest, Watchman (2019), have bombed at the box office.

“It’s impossible to make a film that will be liked by all," he countered. "Irrespective of the result of my films, some still like them and that’s why I continue getting opportunities to work. There is no point in making safe films as I believe that every filmmaker has ups and downs. My ideas might have failed, but I don’t think I fail as a filmmaker unless I give up.”

Vijay is now eagerly looking forward to the release of Devi 2, a sequel to his last big hit Devi (2016). He reunited with Prabhu Deva for the third time in Devi 2, which also stars Tamannaah Bhatia. He did not open up too much about the project. “It will be even more entertaining than Devi. Audiences will find the core idea even more exciting,” was all he said.