Did a lot of diligence with Setters character: Aftab Shivdasani on playing a cop


The actor, spoke about his character Aditya Singh, why a righteous cop is still the ideal superhero and urged people not to blindly emulate certain things that they see on the cinema.

What’s your memory of Aftab Shivdasani? Those who’ve watched him from the beginning would say, he was a sweet innocent orphan in Shekhar Kapur’s Mr. India (1987). His first role as a protagonist was a dreamy ordinary boy next door who, like millions, loved and idolised a gorgeous actress in Mast (1999). He did an odd role as the conniving villain in Kasoor (2001), but in the new millennia, Shivdasani is largely known as this goofy guy in the sex comedy franchise, Masti. The last of those, Great Grand Masti (2016) was leaked before its release, but that wasn’t the prime reason why it didn’t work.

Each generation produces young talent, and in 2016, Shivdasani wasn’t part of that group. For three years, Shivdasani remained a forlorn figure, but the talented actor caught our imagination with Ashwini Chaudhary’s thriller Setters (2019). At 40, Shivdasani gets to play his first role as a cop in a dark thriller.

The film is set to be released on 3 May. Few weeks before the release, we caught up with the actor for a brief, but engaging conversation.

Shivdasani spoke about his character Aditya Singh, why a righteous cop is still the ideal superhero and urged people not to blindly emulate certain things that they see on the cinema. Excerpts.

The Aftab that we usually associate with is one who would say, Love Ke Liye Kuch Bhi Karega (2001) but the one we are seeing in Setters is one jo farz ke liye kuch bhi karega [will do anything for duty]. Is that right?

[laughs] That's true because I am playing a very straight cop. My character is extremely one dimensional. He is all white.

I believe you played a cop in the comedy film Bin Bulaye Baraati (2001).

Actually, he wasn't a cop. He stole somebody's uniform. This [Setters] is the first time that I am playing a real cop.

You do one comedy, if it clicks then, you are likely to be flooded with such roles. Are you pleasantly surprised to be offered this serious, intense role at this point of time in your career?

I think God has been kind. God always blesses me. I have got this opportunity to do something that I always wanted to do. It's something that I am really excited about For an actor, to play a man in uniform is a big high. Also, to work in this setup, with a director [Ashwini Chaudhary] of that calibre, and a star cast of this calibre where you have probably some of the best actors in the country. Such amazing actors [working] in their genre. It's not a comedy but hardcore intensity and grit.

It's been an amazing journey to play such an integral part of a film like this. I did my best to portray [the character] as authentically as an actor.

It's a first such intense role for you. While filming were there certain things that you discovered about yourself through this character? 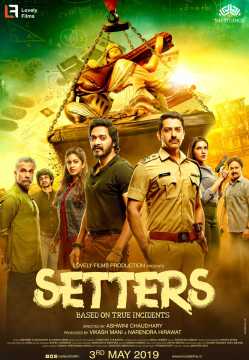 I have always loved to immerse myself in each character. I have always loved to feel like the character. Right from Kasoor (2001) and even Mast (1999), I have always tried to imagine myself as to how it would be to play this character. For this film [Setters] I had the good fortune of interacting with many senior IPS officers in New Delhi, on a one-on-one basis. They shared some classified information with me as to how they got into the minds of these criminals. Behind closed doors, I spent a lot of time with them and understood what is it like to be a cop. I observed them a lot and it helped me to formulate this character called Aditya Singh.

The screenplay, the story had to be backed in a certain way for me to look at powerfully. I did a lot of diligence with this character, then, of course, used my own understanding of how I would be as a cop and I brought that to the table.

Traditionally, cops have been portrayed as larger-than-life figures. Given the ever-rising crime rates, long investigations, is there a certain trust deficit with cops?  Cinematically speaking too, is a cop today still the number one guy when it comes to taking on a corrupt, evil system?

Well, we have films like Singham (2011). The Rohit Shetty brand of cops is larger-than-life. They are superheroes in uniform. Those films work then there is a large belief that these are our heroes. Of course, you have certain films which show corrupt cops.

Of course, the style is vastly different, but I believe a Simmba (2018) is something close to reality, at least on grounds of morality...

In the space that we are projecting it is very gritty. It's a fast-paced thriller where it is not preachy on one end. But it's extremely thrilling and entertaining on the other. It has got that realism attached to it. The film is based and shot in Benaras. We've also shot in Delhi, Jaipur, Mumbai. The film has travelled. The beauty of this film is that it is not even shot on one set. We've shot at real locations, with real people. The portrayal of this film is real, the genre is real. The issue is real and the characters are real. So, we are in that space. We are not trying to be a larger-than-life cop who is bashing up 15 guys. He's a man of authority, but he does his job diligently and honestly.

A film on a similar subject has come before this year. For people who've seen Why Cheat India (2019), what's the hook point to see Setters?

I have not seen Why Cheat India. Emraan [Hashmi] is a friend of mine. My director, writer all who saw Why Cheat India said there is no similarity in the story. Our film is clearly focussed on the modus operandi of the system. That is shown in detail in the film. And that’s what is the USP of the film.

People always talk about corruption. As a society do you feel that there is something fundamentally wrong with us that we see so much corruption?

Corruption stems from poverty. If you are poor then you are more likely to be drawn towards corruption. Today, unfortunately, money is the most important thing for people to survive. How do you survive? If you are economically poor then you will be poor. Poverty leads to unemployment. Unemployment leads to poverty. It is like a vicious circle that leads to corruption and crime. It's all a chain reaction.

In terms of corruption in the education system, how much do you think the caste-based reservation system has contributed?

First of all, I’m not sure I totally believe in that [caste-based reservation system]. I think the government should be focussed on giving free education to people, at least till primary education. The first 10 years of your education in public schools should be for free. That formulates the base of any country’s future. If that happens, then you stabilise the mindset of every young individual of the country, which I think amounts to 65% of the population. Primary education helps them to think better. Once there is education, there is lesser crime, lesser negativity, lesser corruption. I would not even come to the caste-based reservation system until I first give free primary education.

You have been part of the Masti franchise. Today, with rising in sexual crimes, do you think films in such a genre are now past its sell-by date?

I don’t know. It is a tough one. Something if made well, it’s funny and harmless, it will work.

You have item girls dancing around 100 drunk men. It’s this kind of cinematic representation that gets flak for objectifying women.

I agree, but it’s also viewer’s discretion as to what they want to follow and what they want to leave. I am not saying that cinema does not influence people. But you can’t be so stupid to go and jump on a woman just because you have seen something like that in a film. You can’t emulate everything that you see in cinema. That way, we should stop killings in action films. That is also not legal. It’s just not the objectification of women that you get influenced by. People are influenced by action, and bloodshed in films too. Does that mean you are going to stop making action films? No, you won’t. You have to realise it’s a work of fiction.

Love Ke Liye Kuch Bhi Karega (2001) was a memorable film. It coincided with the dawn of multiplexes in the country. Do you think this film was ahead of its time?

It worked a bit too. I think it was ahead of its time. Ten years later, when they saw it, I think they loved it even more. Sometimes things happen for a reason. Ram Gopal Varma [producer] was also ahead of time. A lot of his films that he made were ahead of their times. He was the first guy who made a two-hour film without songs, Bhoot (2003) and it worked. When you think ahead, sometimes you get it right. Sometimes you get it wrong. It’s the same with films.

As an actor, I’ve always found you competent. You mentioned about immersing yourself in each character. Given this kind of passion and dedication, have you been able to get enough roles befitting your talent? Or are you still yearning for them?

I am still yearning for that. The best is still to arrive. Twenty years just went in the blink of an eyelid. Even though it’s just 50 films, I don’t even regard that as... [pauses].

Have you ever pondered over the disappointments?

Only momentarily. Once the film doesn’t work, for a short while you are disappointed. You do wish it would have worked. But then you move on. Life goes on. You have to move on to the next.