The veteran singer visited the sets of Gowariker's period epic, which will feature Sanjay Dutt, Arjun Kapoor and Kriti Sanon.

Director Ashutosh Gowariker has begun shooting for his next period epic, Panipat. The director was joined by veteran singer Asha Bhosle on the sets of his new film.

The singer went on to clap and call the shots on her first visit to the sets of Gowariker's film which features Sanjay Dutt, Arjun Kapoor and Kriti Sanon.

A fan of period epics, Bhosle visited the sets in Karjat, near Mumbai, where she clapped for a scene between Mohnish Bahl and Padmini Kolhapure. Bahl plays Nanasaheb Peshwa, while Kolhapure plays Gopikabai in the film. 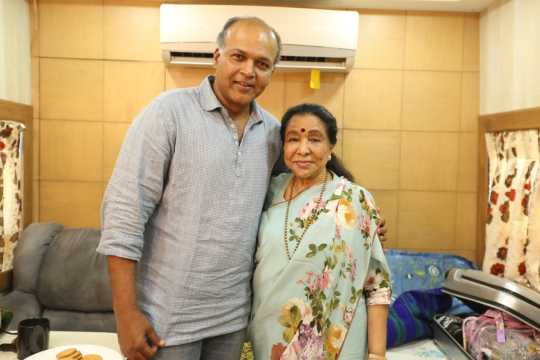 Speaking of the visit, director Gowariker said, "It was really sweet of Ashaji to visit us on the sets. She brought in such vibrant energy and spread lots of cheerfulness. She even called the shots for one particular scene and I must say she does have a knack for direction. We were thrilled to have her on the sets and I hope she keeps surprising me like this with such wonderful visits."

The film is based on the third battle of Panipat, between the Maratha forces and the Afghan king, Ahmed Shah Abdali. The battle ended in a heavy defeat for the Marathas, triggering the decline of the Peshwa empire. Kapoor is believed to be playing the role of Sadashivrao Bhau, the Maratha general, while Dutt is expected to play Abdali.

The film is being produced by Sunita Gowariker under the banner AGPPL in association with Rohit Shelatkar's Vision World. Panipat is scheduled for a 6 December 2019 release.

Correction, 29 April 2019: Ahmed Shah Abdali was described in an earlier version of the report as a Rohilla. He belonged to the Durrani tribe.