The complaint was filed by a journalist after his mobile phone was snatched by Khan while he was out on a ride in Andheri.

A police complaint has been filed against actor Salman Khan for snatching a journalist's mobile phone while he was trying to shoot a video of the actor. 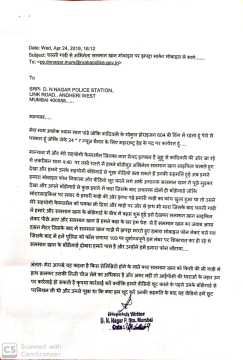 According to Pandey, he and his cameraman Syed Irrfan were travelling from Juhu to Kandivali around 4.40pm. They saw Khan riding a bicycle. They asked the actor's bodyguard if they can make a video of the actor. The bodyguard agreed.

Pandey said, "We took out our mobile phones and started shooting. Suddenly, Salman turned around and gestured to his bodyguards. After that bodyguards riding motorcycles approached us. My cameraman was pushed by one of the guards and he even pushed our car with force. We ended up having an argument with them. Salman turned his cycle and came to us. We told him we were from the press. Salman said 'It doesn't matter'. Then he snatched our mobile phones and left."

While the journalists were dialing 100, Khan's bodyguards returned their phone.

According to a source, a cross-complaint has also been lodged by Khan's bodyguard alleging that the person took the video without permission.