God has not only been kind, but also partial to me: Moushumi Chatterjee on turning 66


As she turns 66 today, she is not on a cheerful chapter of her life. However, she thanked the almighty numerous times and shared her feelings on her journey so far.

Veteran actress Moushumi Chatterjee has been one of the most glamorous leading actresses of Hindi and Bengali cinema since 1967. Her film career commenced with Balika Badhu (1967) when she was only a kid. However, she immediately received massive success and continued to get offers in Bengali cinema before she bagged Shakti Samanta’s Anuraag in the then Bombay in 1971.

She has been paired with legendary actors from both the industries, including Uttam Kumar, Soumitra Chatterjee, Amitabh Bachchan, Rajesh Khanna, Shashi Kapoor, Vinod Mehra and many other big names. She is the recipient of three Bengal Film Journalists' Awards and two Filmfare Awards. She was last seen in Shoojit Sircar’s Piku (2015), alongside Amitabh Bachchan, Deepika Padukone and Irrfan Khan.

As she turns 66 today, she is not on a cheerful chapter of her life. However, while chatting with us, she thanked the almighty numerous times and shared her feelings on her journey so far.

Your last film was Piku in 2015 and then you joined politics this year. What are you mostly concentrating in as you turn 66?

See, I already told some of my journalist friends that currently I am going through a personal crisis as my elder daughter is in a semi-comatose state. I am with her now. I am hopeful that I will be able to start working in films from the end of this year. At this moment I am not feeling up to mark and that’s why I am not actively [involved] in politics as well.

How do you look back at your journey at the stage?

I feel I have been blessed. For me, the appreciation of the cinema lovers are my awards. Overall, I feel good and I have no regrets so far. I never compromised my self-respect in any circumstances. I sometimes feel that not only God is kind to me but, God is partial to me as well. I have been bestowed with much grace and now I only want my daughter to get up and start talking. I am praying for it every second.

You started off quite early before you had any idea regarding the film industry or stardom? How was that stage of life?

Well, I was definitely not aware of stardom. I was merely in the fifth standard when I did Balika Badhu (1967). I owe a lot to Bengal. I had to get married at a very early age. My Boro Pishi Ma (paternal aunt) was at the last stage of cancer and it was her last wish to see me getting married as I was the elder daughter of the family. Then I came to Bombay and my first film after marriage was Anuraag (1972) with Bengali director Shakti Samanta. It was a massive hit. During that time, I was the only actress to join films after marriage.

How did the shift from Bengal to Mumbai feel?

Honestly nothing changed much as my father-in-law Hemant Kumar (Mukherjee) was a very generous person. He played the role of both my father and mother in Bombay. I used to visit Calcutta every month and was in touch with my family throughout. I did not miss much. At the same time, I was extremely busy in coping with my married life, rearing my child - as I became mother at an early age as well, myself and my film career, rather than enjoying stardom. However, the equation with both Bengali and Hindi film industry has always been like that of my two households - one is my Baper Bari (paternal home) and the other is Shoshur Bari (in-laws' home).

What do you feel about your Bengali film career, despite having been extremely successful in Hindi cinema as well?

There are a few milestones in Bengali cinema — Balika Badhu, Parineeta (1969). I have worked with significant directors. I did Ekhoni (1971) with Tapan Sinha, Ogo Bodhu Sundari (1981) with Salil Dutta, Goynar Baksho (2013) with Aparna Sen. The Bengali industry was very kind to me.

How do you think the Bengali industry has changed over the years?

There are both good and bad films being made these days. Films should be entertaining with a message in it, those kinds of films are rarely made but there are some really good directors there. But I don’t think there are exceptional actors these days in the Bengali film industry and it is also sad to see the genuinely talented artistes not getting much work.

If you could name two directors from both the industries who have had significant contribution in your career...

Honestly, I started off at such an early age that I did not get much time to undergo any formal training. I learnt a lot from Tarun Majumdar, whatever he used to instruct I followed closely. I would like to say that basically I am a learner and tried to absorb from everybody. I am still learning and will continue to do so. I feel, one can learn as long as one keeps his or her mind open.

Are you looking forward to working with any specific director?

I am looking forward to good scripts and good directors as well because filmmaking involves three stages. The story changes from narration to shooting to the post production. Basically, my entire objective is to learn from everyone involved in the filmmaking process, be it the cameraman or the music director.

I know there are so many good directors in the Bengali film industry who cannot make films due to the lack of support and also, the entire industry has been heavily politicised which was not the scene earlier. In the past, creativity was given supreme importance. Now it is more about business and there are so many obligations that creativity sinks under a lot of pressure.

Do you have any dream character that you are yet to portray? 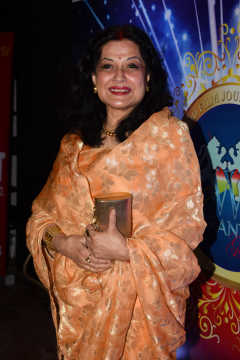 I take up every character as a challenge. I know that now the characters have to go with my current image and age. I cannot dance and romance now. I am looking forward to characters that I can portray with dignity.