Swara Bhasker is a wonderful girl, but a little misguided, says Vivek Agnihotri

More than his films, filmmaker Vivek Agnihotri tends to court controversies for his strong political views. Sometimes these discussions can turn ugly, but Agnhitori insists these aggressive debates don’t really lead to any animosity between people.

“This is all media created. Look, I am sure when Narendra Modi and Mrs Sonia Gandhi sit, they will also talk normally. I have been to so many news debates, people fight like dogs. But as soon it is over, they are cordial to each other. Only immature childish people would have enemies,” The Tashkent Files (2019) director told us.

In the past, Agnihotri has had some bitter social media tussles with actress Swara Bhasker. Have they ever bumped into each other? And if they did, was it a cordial meet?

"Yes, she met me at PVR [cinema] or somewhere," Agnihotri said, adding, "She was very nice to me. She is a wonderful girl, but little misguided and lost. Now that’s another matter."

Last year, Agnihotri received flak after posting a controversial tweet attacking Bhasker over the issue of alleged rape of a Kerala nun by a priest. Agnihotri had tweeted to Bhasker asking: 'Where is the placard #MeTooProstitueNun?' 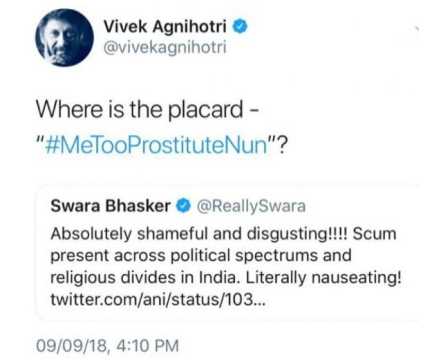 When asked, Agnihotri clarified that he wasn’t being insensitive to the rape victim but claimed that his tweet was a result of the #MeTooUrbanNaxal campaign, which Bhasker had supported.

“After my book Urban Naxal came, some urban Naxals were arrested. People like Swara started a campaign saying #MeTooUrbanNaxal. That’s like someone saying, #MeTooATerorrist without understanding who are urban Naxals,” said Agnihotri.

Agnihotri explained that he was disappointed not to see the likes of Bhasker in support of the rape victim. “Naxalites are against democracy. These people ran #MeTooUrbanNaxal. They take a placard and post #MeToo just to support somebody. So when that nun said that I was raped, none of these people came to her support. I was the first person to raise a voice against the priest. These people [Bhasker] they didn’t do it because they are anti -Hindu people. For them, saying anything against Christians, Muslims is bad. I asked them where is their placard? That’s all I said.”

This is not the first instance when Agnihotri’s tweets have created a controversy. In January 2018, Agnihotri and director Neeraj Ghaywan were involved in a Twitter war of words.

Ghaywan had taken offence to Agnihotri’s tweet mentioning about Dalit icon Baba Ambedkar’s grandson travelling by air in the first class whereas a Brahmin like him was travelling in an economy class. 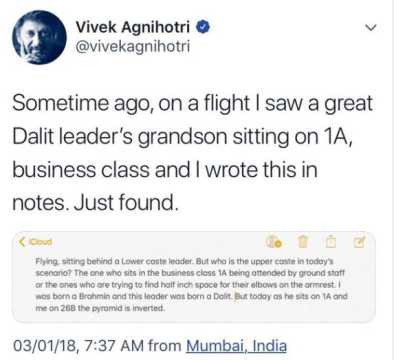 "I am a Dalit. I won the Cannes film award for our country. Also the Cannes advertising award. I won the National award & the Filmfare award. All without using my Dalit identity. And yes, I fly business class now and I will offer you my seat next time you’re on the same plane," tweeted Ghaywan.

Defending his controversial tweet, Agnihotri said, “What Neeraj did was childish and stupid. What was my tweet, that I am sitting in the back row and in 1A, one grandson of a Dalit leader is sitting there? Isn’t that great? India has come a long way that today nobody asks you whether you are a Dalit or a Brahmin? If you go to a hotel does someone asks you what is your caste?"

About talking of caste on a public platform, he shot back, "What’s wrong with that?". “Barack Obama became the president of America. That was a matter of great pride,” he added.

But Ghaywan merely said that his success and first class travel had nothing to do with his caste. “Then why did he mention about his caste? Why did he play the Dalit card? You become a victim there. These are hypocrites. Such people choose to play the Dalit card when it suits them," replied Agnihotri.

“Not misconstrued. They twisted it, deliberately. These people always want to engage Indian audiences to make them believe that India has not progressed as far as social re-engineering is concerned. They always want people to believe that women in this country are weak and not empowered. They want people to believe that all people are corrupt, all rich people are bad. We are always accusing and abusing our politicians, entrepreneurs? You think without this country is running without good politicians?" the Tashkent Files director questioned.

The outspoken filmmaker was of the view the likes of Bhasker and Ghaywan were "harming the image of the country".