The film marks Vamshi’s maiden collaboration with Mahesh Babu, who was last seen playing a CM in Bharat Ane Nenu (2018)

Superstar Mahesh Babu’s upcoming Telugu film Maharshi, which is gearing up for grand release on May 9, had its wrap up party on Thursday. Director Vamshi Paidipally took to Twitter to share a heartfelt post and pictures from the party.

“Maharshi. It’s a wrap. A Journey that will be remembered and cherished for a long time. Thank You Mahesh Babu sir for all the support & trust,” Vamshi tweeted.

#Maharshi.. IT'S A WRAP... A Journey that will be remembered and cherished for a long time..Thank You @urstrulyMahesh Sir for all the support & Trust.. Thank You @hegdepooja @allarinaresh @ThisIsDSP @KUMohanan1 & the whole Team.. Without You All nothing was possible..:) #SSMB25 pic.twitter.com/jzvNTDZNla

With the key shoots successfully completed, the makers will begin the promotions in a couple of weeks.

The film marks Vamshi’s maiden collaboration with Mahesh Babu, who was last seen playing a CM in Bharat Ane Nenu (2018).

In Maharshi, Mahesh plays a character called Rishi and the story will be about his journey. He will be seen playing three avatars – a student, a millionaire and as a common man. 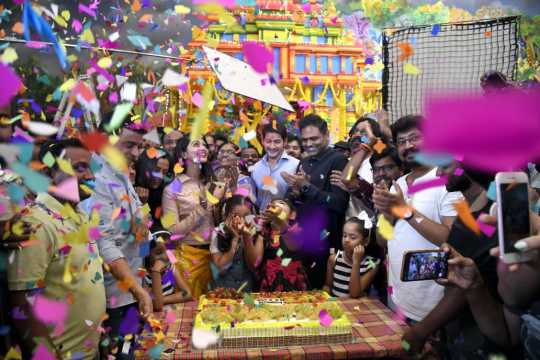 The film was originally scheduled for an April 25th release. However, last month, producer Dil Raju confirmed in a press meet that the release has been pushed to May 9th. He revealed that the release was postponed since post-production work was taking more time than expected.

The film, which has been jointly produced by Dil Raju, Ashwini Dutt and PVP Cinema, has music by Devi Sri Prasad while KU Mohanan has cranked the camera.

Maharshi is Mahesh Babu’s 25th film. Ever since the film’s announcement, there has been a great deal of hype on the film and on the combination of Vamshi Paidipally and Mahesh.

The makers are planning to release the highly anticipated trailer in the last week of April.