If the assault was true, why would she work in Raaz, Mahesh Bhatt questions


The veteran filmmaker shared a tweet with Cinestaan.com that raised a serious question to the Raaz (2009) actress. Kangana's spokesperson rebutted saying that Ranaut had no interaction with Bhatt, but did the film for her friend, Mohit Suri, who helmed Raaz.

Two days after Rangoli Chandel claimed that Mahesh Bhatt had hurled a slipper at her sister Kangana Ranaut during the preview show of Woh Lamhe (2006), the veteran director has pointed out that if the statement was true, then why would Ranaut work with Bhatt in Raaz: The Mystery Continues (2009)

Efforts to contact Bhatt earlier in the day proved futile, but late last night, the veteran filmmaker sent Cinestaan.com a screenshot of a tweet posted by an individual named Vaibhav Arora who tweeted back to Chandel asking if Bhatt did indeed hurl a slipper at her (Ranaut), why did the actress work in another film produced by Bhatt three years later. 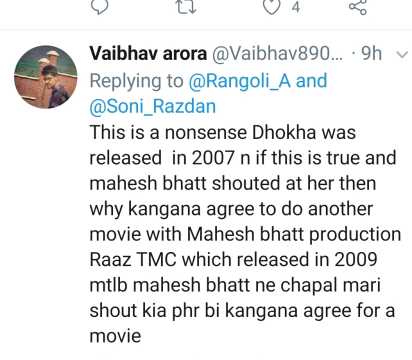 We tried looking for the said Twitter handle, but were unable to locate it.

While Bhatt did not make his question clear, his message to Cinestaan.com implied that he was raising the same point as the tweet above.

Efforts to reach out to Rangoli Chandel didn’t elicit any response. A spokesperson for Ranaut though stated, "Mohit [Suri] is her friend and she worked with him.. in no way she had to interact with Mahesh Bhatt. Her only interaction was with Mohit Suri. Why should she bother about Mahesh when she was assured he won't deal with her in any way. Besides Mukesh Bhatt said Mahesh works for him like an employee. In no way does he hold shares or any stake in Vishesh Films. So why should she say no to a film over somebody else’s anger issue."

The Ranaut versus Bhatt's verbal battle is a result of the Woh Lamhe (2006) actress constantly attacking Bhatt's daughter Alia in the recent past.