I am happy the #MeToo movement has come to India: Tanushree Dutta's sister Ishita


While there has not been much progress in Tanushree Datta's case against actor Nana Patekar, her younger sister believes predators in the entertainment industry are more fearful now.

The #MeToo movement against sexual harassment has taken India also by storm, with many victims naming and shaming their alleged attackers.

In the Hindi film industry, it was actress Tanushree Dutta who started the movement after she revived her sexual harassment case against veteran actor Nana Patekar late last year.

It has been six months since Dutta spoke up, but there has not been much progress in the matter as the Mumbai police claim to be still conducting their investigation.

Before leaving for America earlier this year, Dutta issued a long post wherein she cursed Patekar, his family and all those who gave her grief 10 years ago.

There was a sense of helplessness in her post, leading to concerns over her well-being. Speaking to Cinestaan, her sister and actress Ishita Dutta affirmed that Tanushree is in fine fettle.

“She is doing fine, she has been travelling and she is happy,” Ishita told Cinestaan.

There has not been much progress in the complaints against Alok Nath and Nana Patekar, though the former has been expelled by the Cine and TV Artistes Association (CINTAA). But CINTAA or other film associations do not take action in cases that are already before the courts.

Is there a sense of frustration for Tanushree that not much has transpired in her case?

“In certain cases action has been taken, in certain cases not much is happening," Ishita agreed. "However, I always like to see the glass as half-full. Ten years back, people didn’t even acknowledge that something like this is happening. Everyone knew it was, but people chose to shy away from it.”

While the progress in her complaint against Patekar has been slow, Ishita takes pride in the fact that her sister triggered the #MeToo movement in the Indian film industry.

"I know things can’t change overnight, but I am happy the movement has started," she said. "I am proud that my sister was the one to start it. She didn’t intend to. It just happened. She is someone who has spoken the truth, she has never been scared to speak her mind, stand up for herself," said the younger Dutta.

Ishita felt that with many like her sister opening up, people are scared to commit such offences. She added that she had never encountered such dubious characters in her short career so far.

“Fortunately, because of my sister, I have always had people who have been nice to me," she said. "I am glad that at least the movement has started. And something has to be done. What’s happened is in the past. But you at least want people to be scared. I think that fear now exists." 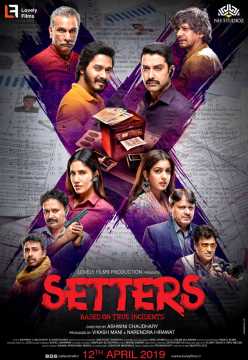 On the professional front, it is an exciting time for Ishita. Come 3 May, she will have not one but two releases in the theatres — Behzad Khambata’s Blank and Ashvini Chaudhary’s Setters.

In Setters, Ishita plays the daughter of a gangster while in the Sunny Deol-starrer Blank, she plays a cop.

"It’s an exciting time for me,” she said. “I really want both my films to do well. I have to say both are story-driven, they have good content. Thankfully, now people want to watch films which are not just about singing and dancing. They want to see something more interesting. I think both these films offer that.”

Commenting on the experience of working with veteran actor Sunny Deol, Dutta said, “It’s amazing. Sunny sir is super comfortable to work with. We have seen his movies before. Here, he too is playing something different."