2.0 posters out, trailer to be released on 13 September

Director Shankar’s 2.0, which is the sequel to his 2010 film Robot (Enthiran in Tamil), has been in the making for a long time. The film was supposed to be released earlier this year on 26 January (Republic Day), but then the release was pushed to 29 November.

The excitement to see Rajinikanth and Akshay Kumar together on screen for the first time just went a few notches higher with the release of three new posters. The film's trailer will be out on 13 September.

Two posters feature the bird, supposedly Akshay Kumar’s character. One is an image of the destruction of a high-rise building with the claws of the bird on it. The second is a scary picture of the massive bird's face.

The third poster features both Rajinikanth and Akshay Kumar. The former appears in a double avatar while the latter sports a menacing look as the antagonist.

During the digital poster launch of the movie, Rajinikanth had said he would have loved to play Akshay Kumar’s character in the film.

The film is produced by Lyca Productions in association with Karan Johar. 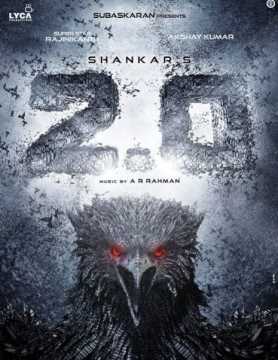