On the film's 50th anniversary (it was released on 6 September 1968), a look at how the documentary filmmaker and cartoonist made his first feature starring Nutan and Manish.

It would be fair to say that Saraswatichandra is one of Gujarati literature’s most loved novels. The unfulfilled love story of Saraswati and Kumud is a tragic tale that one can revisit time and again, like Emily Brontë's Wuthering Heights.

Back in the late 1960s, one man took up the challenge of bringing the film to the big screen.

Govind Saraiya, who went to the US to learn animation at the Walt Disney Studios, worked at the Films Division for 11 years as a documentary filmmaker. For his first feature, he decided he would be the one to translate the classic story for cinema audiences.

In interviews he has given over the years to Gujarati publications Divya Bhaskar and Mumbai Samachar, the filmmaker from Nadiad, Gujarat, shared his long, hard journey to make the black-and-white film.

The germ of the idea, he told Divya Bhaskar newspaper, to make the film began at a party. After a couple of drinks, there was a discussion on good films coming only from Bengal and a man offered to finance his film, but what would Saraiya make? He answered, Saraswatichandra, of course. From then on, it was decided he would make the film. And though it became a theme the press focused on, Saraiya felt it was his mission in life to make the film.

The next day, he got a call from Jasubhai Patel who reminded him of the businessman who had agreed to invest in Saraswatichandra. When he went to meet him, the businessman asked how much money and Saraiya replied Rs10-12 lakh, to which he agreed.

It felt like a joke, so Saraiya further asked for Rs5,000 to test him. The businessman called his man and asked him to give the money. He placed a Rs5,000 note in Saraiya's hand. The benefactor’s name does not appear in the film and Saraiya has respected his privacy. The film’s production credit reads only as 'Vivek'.

The film is remembered today for its timeless music by Kalyanji-Anandji. The composers of such hits like 'Chandansa Badan', 'Phool Tumhe Bheja Hai Khat Mein' and 'Mai To Bhool Chali Babul Ka Des' won the National award for Best Music Direction for this film.

But not many are aware that Saraiya, who was very involved with the creation of the music, wanted the classical musician Pandit Omkarnath Thakur to score the music for the film.

The great singer even agreed to compose the music, but his health deteriorated and he had to bow out. (Pandit Omkarnath Thakur died on 29 December 1967.) Later, Naushad was interested in scoring the music for Saraswatichandra, but Saraiya wasn’t sure he would get the right sound for the film. Then Kalyanji-Anandji came on board, even though Saraiya warned them he had a low budget.

During the two years that it took for the film to be made, attempts were made to replace director Saraiya, but filmmaker Hrishikesh Mukherjee insisted that Saraiya was on the right path and to let him make the film. Saraiya was eventually allowed to finish his vision.

Amazingly, the film got released with just one print. It was released in Ahmedabad’s Rupali, a new theatre at the time, which was derogatorily referred to as a tabela, or cowshed. The film was premiered there. The chief guest was the famous Gujarati writer Umashankar Joshi. Saraiya was nervous to head inside the theatre, but at intermission, the thunderous applause of the audience beckoned him in.

According to Saraiya, the film cost Rs12 lakh for prints and publicity. The film had trouble finding distributors, and eventually filmmaker Nasir Husain took its distribution duties as a gamble, which paid off.

In an interview with the newspaper Mumbai Samachar, Saraiya said he had a connection to the material early on. Saraiya’s uncle, Fulchand Master, was a playwright and poet who worked for the author of Saraswatichandra, Govardhanram Tripathi, as a scribe. Their families were close. 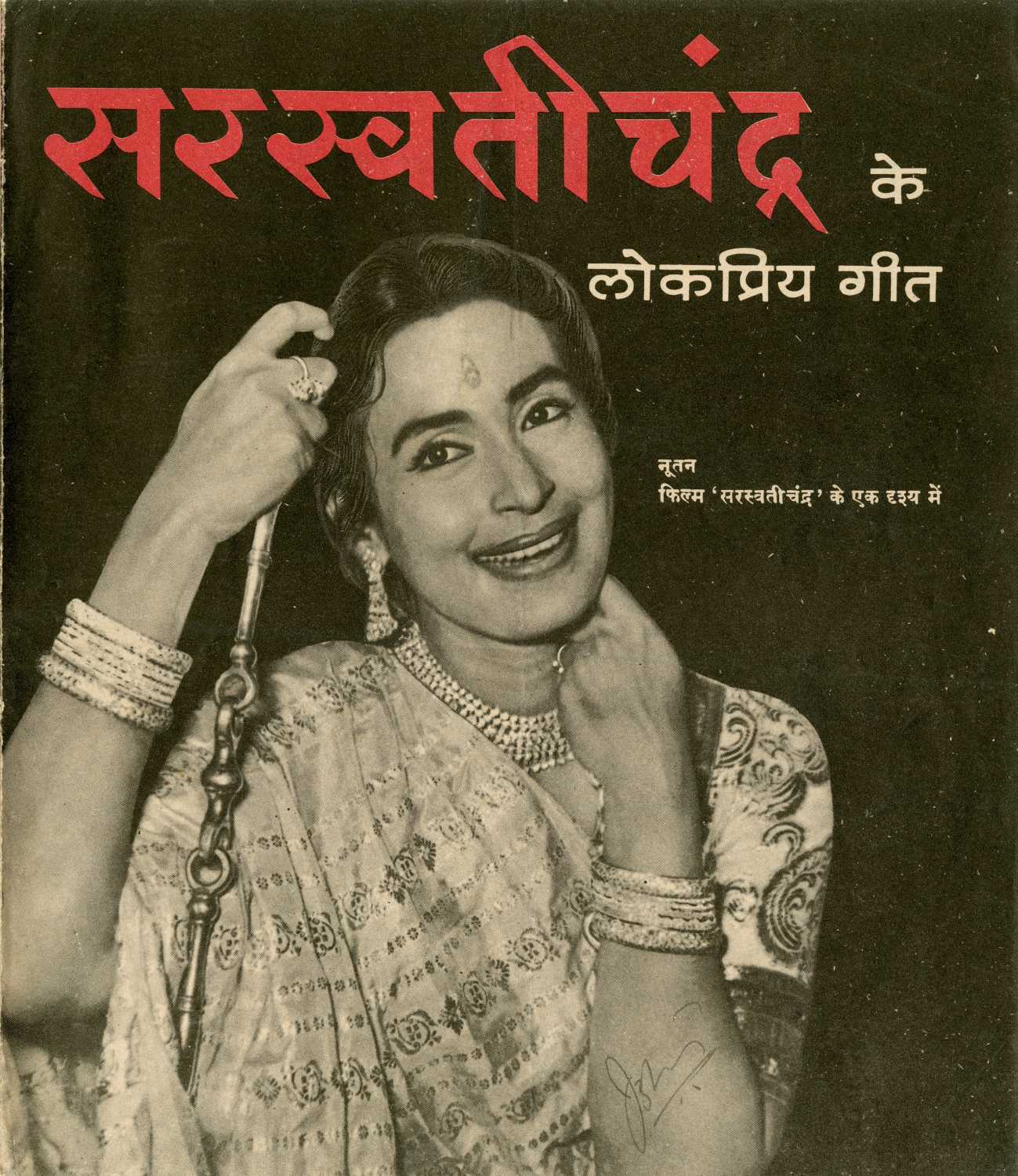 When he grew up, he purchased the four parts of Saraswatichandra from the author. He wanted to make the film in Hindi and Gujarati. They started making the Gujarati version first and, later, the writer Manohar Shyam Joshi started work on the Hindi version.

The director also had an arduous road to casting. Nutan was not the first choice for the makers as Kumud; it was Nimmi. After writer Manohar Shyam Joshi, Jainendra Jain and screenwriter Vrajendra Gaur also worked on the screenplay. Writer Ali Reza wrote the dialogues, but then he got engaged to Nimmi and later did not want her to act in the film.

Even Dilip Kumar had shown interest and asked for a narration. But he took his time in saying yes, so others like Rajendra Kumar were considered. Saraiya went to see a play, Setu, in Kolkata which had done 2,000 shows. The actor Aseem, playing the negative character, was interesting.

Saraiya decided he would be the one to play his hero in Saraswatichandra. They changed his name to Manish. However, another actor called Vijay Dutt had already been signed for the role, but because he could not provide dates, they got Manish.

Finally, for Kumud, it was a family connection that landed Nutan the role. Nutan’s father, Kumarsen Samarth, worked with Saraiya at the Films Division. He was on good terms with his estranged wife, Shobhana. After she heard the role of Kumud Sundari, Shobhana Samarth told Saraiya, “Poore India mein yeh role kar sake aisi actress ek hi hai, meri beti Nutan, lekin uske saamne mera naam na lena [Only one actress in all India can perform this role, my daughter Nutan. But don’t tell her I told you].” The actress mother-and-daughter had had a falling out.

Luckily, Nutan said yes to the role, and whatever money they wanted to give her. In between, the makers also thought of Asha Parekh, but she was hesitant to act in a black and white film.

And thus, Saraiya’s labour of love finally got its Kumud and Saraswati. The filmmaker went on to make other films from Gujarati literature, including Saraswatichandra’s sequel Gunsundari No Ghar Sansar (1972). But his first remains unforgettable for lovers of cinema.