I see myself as a guardian of this industry: Prosenjit Chatterjee


The Bengali film star, who celebrates his 56th birthday today, speaks of his plans both as an actor and a producer.

There are many reasons Prosenjit Chatterjee is called 'the industry’ in Bengal. The star not only anchored Bengali cinema with commercial hits in the days when it was foundering, but also transformed the culture of the industry by introducing basic things like regular payments and by aiding in multiple productions.

Prosenjit Chatterjee, who was often credited simply by his first name like his father Biswajit, began his career as a child artiste with Hrishikesh Mukherjee’s Chotto Jigyasa (1968). Actually, his first film was with pioneering filmmaker Bimal Roy but it was never released. As an adult, Prosenjit's first big success came with Sujit Guha’s romantic drama Amor Sangi (1987).

Established in mainstream Bengali cinema, Prosenjit took a big leap with Rituparno Ghosh’s Unishe April (1994). Though he was the biggest star of the day in Bengal, he did not mind playing a supporting role in a female-orientated film. With Srijit Mukherjee’s Autograph (2010), Prosenjit also began to challenge himself as an actor. 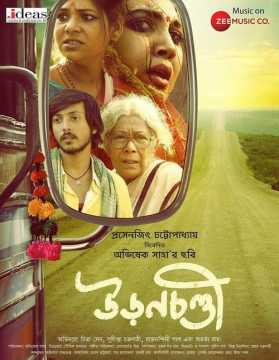 Prosenjit's own production house Nideas Creations and Productions recently produced Uronchondi (2018), which reaped both commercial and critical success. On his 56th birthday, the actor shared with Cinestaan.com his plans both as an actor and a producer. Excerpts from the conversation:

How experimental are you trying to get as an actor after four decades in cinema?

If you go through the last 8-9 years of my career, you will see that none of my roles are the kind of characters I used to play before. Now I make sure that apart from the brand Prosenjit Chatterjee, people should talk about my characters in the films as well. When it comes to Autograph, people talk about Arun Chatterjee. Or people talk about Jiyon Mitra when it comes to Drishtikone (2018). Same goes with Lalan Fakir in Moner Manush (2010) and many films by Rituda [Rituparno Ghosh].

When I worked with Rituda, I came out of my usual genre of commercial films and played those characters. First of all, he gave me the opportunity to reinvent myself. He was the first person to show a different side of me as an artiste. He ignited that spark and now directors of this generation — Srijit Mukherjee, Kaushik Ganguly — are offering me characters which were not given me to me normally. I am hoping that for my upcoming film I will be remembered as Kishore Kumar Junior.

You have been a star and a brand for the past few decades. What do you think you are yet to achieve?

I say I used to be a star, but that doesn’t mean I am not one anymore. Unfortunately in Indian cinema, stars and actors are not counted in the same category. But there have always been a few exceptions. For the last 8-9 years, my challenge has been to create my own identity as an actor despite being a star. I want my films to do well, but at the same time I should be noted for my performances. The success of Mayurakshi (2017) is proof of that.

For the same goal, I have had to give up a lot. There was a time when people used to whistle if they could have a glimpse of my feet or break into applause listening to the prelude of any of my songs. However, one needs to give up certain things to achieve others.

Also, I want to do roles that go with my looks. I don’t want to challenge my time and age. Actors have the tendency to appear younger no matter how old they get. I did the opposite. I did a character of 102 years of age in Moner Manush (2010); in Baishe Srabon (2011), I played a character who was twice the age of Parambrata [Chatterjee]. I have never allowed the audience to understand the phases of transformations.

Your recent production Uronchondi did very well and you also got associated with the talent-mining platform Yes Bangla. What are the next steps you are taking as a producer?

See, I would not say that the Bangla industry is in a very good position, but yes, all industries go through good and bad times. Now technology is changing and entertainment is taking new shape. In previous generations, cinema was the only medium of entertainment, but now that is not so. It has become a big challenge for filmmakers to draw audiences to the theatres.

However, my points are clear. I don’t sit in a producer’s chair. The people in my team are the ones doing most of the work. I am there to guide them and present them. My objective is to give a bit of what I have learnt and gained from the industry in return.

As a producer of Nideas Creations and Productions, I am planning to come up with good content, newcomers and new faces. Most of the newcomers of this generation are connected with Nideas. For example, Mimi [Chakraborty], Arjun [Chakraborty] and Gaurav [Chakrabarty], they came from Gaaner Oparey [musical TV series]. If five years down the line, the newcomers of Uronchondi do well, I will know that I have gifted a good director, good actors to the industry. Also, we are into the process of making a few films because I need to see the economy of the production house.

Do you still have dream roles?

How do you feel when you are called 'the industry'?