After midnight narration, Ajay Devgn turned up on the sets as Singham at 7am


Rohit Shetty tells the fascinating tale of how, in the space of seven hours, the star was convinced by the Singham (2011) script and showed up for the shoot, barely 24 hours after arriving from London.

Rohit Shetty and Ajay Devgn. This friendship has stood the test of time. Both were born to action-director fathers. Ajay Devgn’s father is the veteran action director Veeru Devgan, while Shetty’s father was the renowned MB Shetty, who was not only an action director, but also played a toughie on screen, most notably in many Amitabh Bachchan blockbusters.

Rohit Shetty emulated his father by becoming an action director, but he had bigger ambitions and soon took the directorial plunge. And who else was at hand to help him achieve his dream but Ajay Devgn?

The action hero starred in Shetty’s maiden film Zameen (2003). While the film bombed at the box office, Devgn stood by his friend. Three years later, the action hero and the action director-turned-filmmaker came together for a comedy film, Golmaal: Fun Unlimited (2006). The film was a big hit and the rest, as they say, is history.

In his 15-year directorial career so far, Rohit Shetty has cast Ajay Devgn in as many as 10 of the 13 films he has made. Rumour has it that Devgn will make a special appearance in Shetty’s upcoming action drama Simmba starring Ranveer Singh.

“I was carefree," Shetty said rather unapologetically. "I knew I won’t have to struggle because I have Ajay Devgn. My first film Zameen (2003) bombed, but he stood by me. When we were making Golmaal: Fun Unlimited (2006), a lot of people said here are an action hero and an action director trying to make a comedy. This was said to be the making of a disaster. Then Golmaal happened. Whatever I am today, it is because of Ajay Devgn.”

When you have been friends like forever, an actor goes by the mere conviction of the director. Shetty shared a fascinating story about how Devgn came on board with Singham (2011). This was a film that wasn’t planned, but it was pure destiny the way things fell together.

With three comedies to follow Golmaal: Fun Unlimited (2006), Shetty began wondering whether Ajay Devgn and he should also look at an action film.

The problem was that Shetty had no story and Devgn had committed his time to another project. Destiny, however, threw up a surprise. The film that Devgn was supposed to do got shelved. That freed the star's dates up.

One morning, Shetty was to have a sitting with his Bol Bachchan writer. That got cancelled as the writer’s daughter fell sick. A few days earlier, Shetty had met officials of Reliance Big Pictures, who wanted him to remake a Tamil blockbuster called Singam (2010), starring Suriya. Reliance had co-produced that film.

The director had taken the Singam DVD but hadn't found the time to watch it. After his Bol Bachchan sitting got cancelled, Shetty watched Singam. He just liked four dialogues from the film; the rest did not appeal to him much.

"I really liked four scenes. Other than that, you can’t make the same film, but this character can do wonders,” said Shetty.

The same evening, Shetty met Devgn and told him about Singam. “He [Devgn] looked at me and said, you are making Bol Bachchan with me, Chennai Express with Shah Rukh Khan, when will you make this [Singam remake]?" recalled the director.

Shetty confidently told Devgn, “I’ll make it in this window. I asked for two months for writing and two months for shooting. Ajay looked at me and said, 'Tu kar lega na [Will you be able to do it]?' ”

Devgn then went to London to shoot for Tezz (2012) but he wasn’t on board yet for Singham. On 6 March, Shetty began shooting with the film's villain, Prakash Raj.

"We started shooting Singham (2011) with Prakash Raj," the director recalled. "Devgn came straight to Goa from London on 6 March. He was sporting the moustache [his look], he had bulked up for the character. We started the narration at midnight. It got over at 2:30am and at 7am, he was at the sets standing as Singham! That’s the kind of conviction he has.”

Shetty and Devgn would team up again for Singham Returns (2014), which turned out to be a bigger hit.

Similar faith was reposed in Shetty by Shah Rukh Khan. Shetty gave Khan the blockbuster Chennai Express (2013), something Khan badly needed at that stage of his career. The Chennai Express script had been lying with Shetty since 2006.

In 2011, it was widely rumoured that Shetty had acquired the rights to Gulzar’s cult comedy classic Angoor (1982) and Shah Rukh Khan would be playing the lead. While Shetty did hold the rights to remake Angoor, the director had another proposal for Khan. 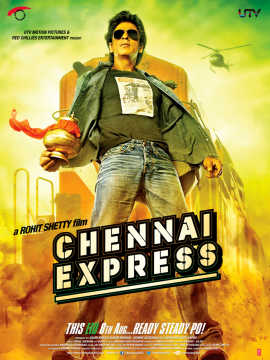 "The Chennai Express script was written in 2006," Shetty told the gathering. "I was to make Angoor, but I was keen to make Chennai Express with him. Before going to meet him, I feared this will be my last meeting with Shah Rukh Khan. He was expecting me to narrate Angoor, but I had the other script for him. When I told him about the other script, he said he was fine with that and just wanted to work with me!”

Shetty was all praise for actors like Shah Rukh Khan, Akshay Kumar and Ajay Devgn, who go by the director's instincts and conviction.

Shetty worked with Khan again in Dilwale (2015) but could not repeat the success of Chennai Express.

The director has now started a new chapter in his career by roping in Ranveer Singh for Simmba. The film hits the screens on 28 December.