Golmaal Returns did well at the box office, but I think it's a horrible film: Rohit Shetty


Speaking at the Jagran Film Summit, the filmmaker said that is someone was paying 10% of his hard-earned money to him, he has to see to it that the person is entertained.

Formula films and mindless entertainers once considered the bread and butter of Bollywood, don’t come by the dozens anymore. One man who has reaped success in the new millennium is action film direction is filmmaker Rohit Shetty.

A careful look at his career reveals how his films either fall in the comedy or action genre. Shetty is the creator of the successful comedy franchise Golmaal and he has also helmed the two action films - Singham (2001) and Singham Returns (2014). His last flick, horror comedy Golmaal Again made a whopping Rs200 crore nett in India.

Shetty has his critics, but they hardly bother him. For him, it's the family audience that drive his films.

In the modern world, the term BFF (Best Friends Forever) is used to describe relationships. At the Jagran Film Summit, Shetty became the most apt person to talk on the topic 'how to make the audience your BFF'. Shetty was in conversation with Jagran Film Festival film director Mayank Shekhar, that was followed by Q&A session with the audience. 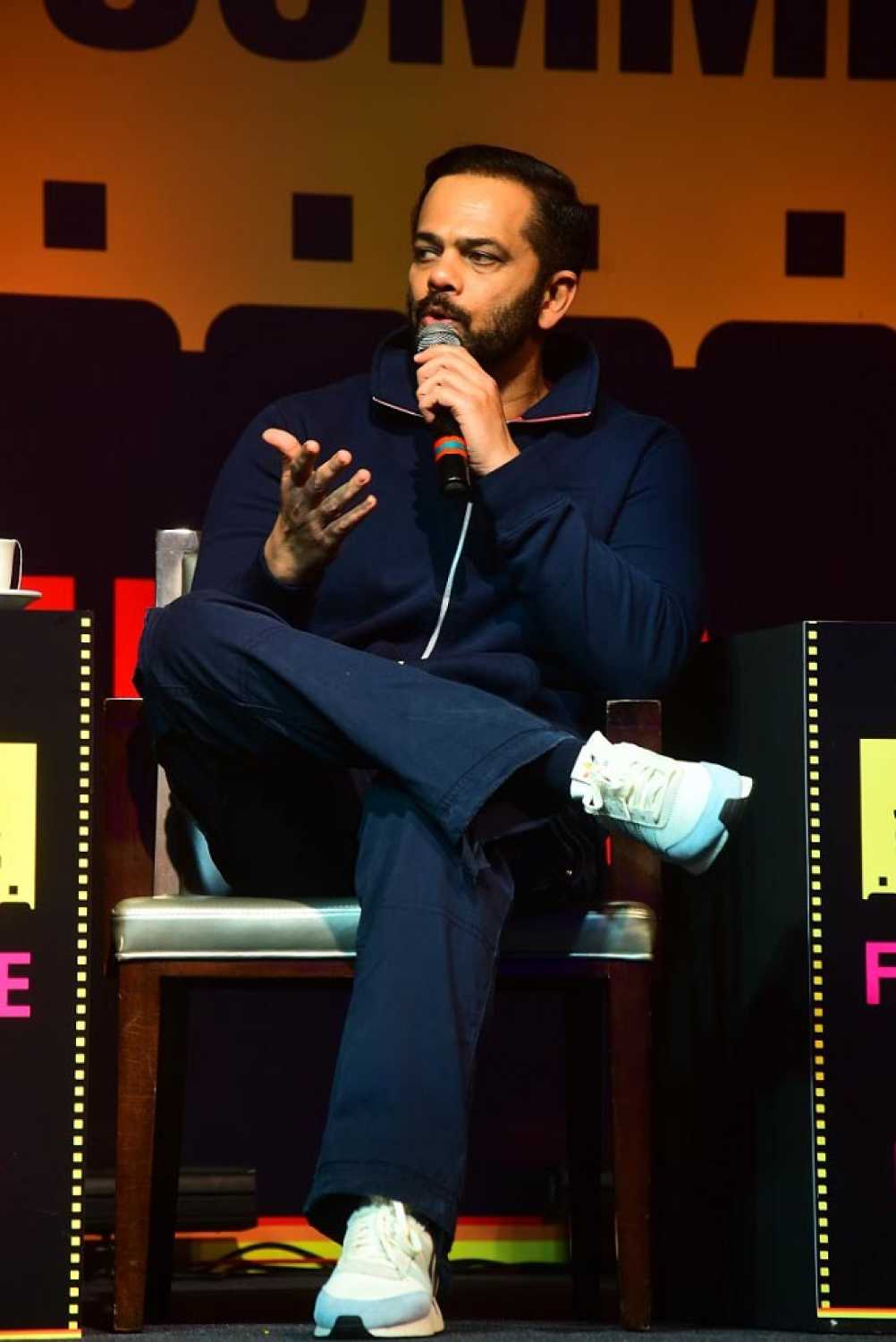 You say a commercial film will work, but you don’t quite define what commercial means. Isn’t every film commercial, in that it needs to gets a return on its investment?

When you're investing, you need to have the returns. Otherwise how will you function? You can’t do a film where the producers are crying, the audience is confused and you are still saying, 'I have made what I wanted to make, this is my cinema’. I don’t believe in that. There should be no losses. When I say a film is doing well, it means the money is coming in. When we say the film has made Rs200-300 crore business, I would rather have one saying, three or four crore people have watched it.

When we say it is commercial film, are there certain boxes that you need to check?

I cater to the family or mass audience. When I’m writing or shooting a film or editing it, it’s important to know what they are thinking, and not what I’m thinking. So, if we feel a particular thing may not appeal to family audience, then we remove it. Be it writing, shooting or editing, I’m always thinking of the audience in my mind.

When we talk of cinema is changing, it has always been like that. When [director] Manmohan Desai was making Amar Akbar Anthony (1997), Hrishikesh Mukherjee was making Chupke Chupke (1975). When Ardh Satya (1983) was made, we had Mithun Chakraborty films doing well. If you go into the history of cinema, it was always changing, they had these parallel sides - one commercial, the other was an art film. Today, the latter is labelled a multiplex film. But I think there is nothing like that, a good film is a good film, a bad film is a bad film.

When you position yourself as a filmmaker, do you see yourself in line with a Manmohan Desai or a David Dhawan? Is that where you seek your inspiration from?

I see myself as Rohit Shetty. What I have done earlier, whether I’m doing better than that. Have I done better than that? That is more important to me. As far as position is concerned, it just happens because you do television, you become a brand, and there is a brand of cinema. Sometimes, when another director does action, then my name comes up. I do take care of my branding and positioning. I’m quite practical when it comes to positioning myself.

There is a difference between art and entertainment. One way to look at it would be that if it is art, then it is purely a self expression. The other is entertainment, it’s not about you, but you are looking at the public, what they want. Have you ever felt the need to express yourself, being sometimes perhaps more important than what the public may want?

I’m more happy when the audience is happy. That gives me a high, it keeps me happy. The audience is more important. Today, a person may be earning an average monthly salary of say Rs35,000. If he is going to a multiplex to see a film, he is paying 10% of his hard earned money to me. I have to see that he is entertained. I can’t be like, 'oh this is my dream, my cinema, to hell with the world'. I can’t do that. There is no harm in expressing yourself. It is just that I cater to a segment of the audience. I’m happy when they are happy. If they are not happy, then I get restless.

Would it be correct to say that when a film has done well [business] it is a good film, and when it hasn’t, it is not a good film?

Not really. What is the barometer, that’s important. The budget, the audience it is catering to needs to be taken into account. Golmaal Returns (2008) did well at the box office, but I think it is a horrible film. As a filmmaker when I saw the film, I didn’t like it. We were lucky to escape. Today, nobody can define what is good or bad. There are many films, including one or two of mine, which didn’t deserve to do that kind of business.

You have done 13 feature films out of which 10 are with Ajay Devgn. I'm not sure how long he has been married to Kajol, but he is married to you for some 28 years... That is a crazy marriage.

I was carefree. I knew I won’t have to struggle because I have Ajay Devgn. My first film Zameen (2003) bombed but he stood by me. When we were making Golmaal: Fun Unlimited (2006), a lot of people said that here is an action hero and an action director trying to make a comedy. This was said to be the making of a disaster. Then Golmaal happened. Whatever I am today, it is because of Ajay Devgn.

Not many directors in the industry do this. Your films end with ‘Rohit Shetty and team’. People credit their team in life, but not many credit them on the screen. Is that a conscious call you took in life?

Today you have a team that works with you. Then after the film is done, the director would go on a break, and when he returns, he has a new team working with him. Somewhere down the line, there is no emotion involved. I have people with me who have been with me since when I was an assistant director. My chief AD has been working with me for the last 10 years. She is turning director now.

They are like family to me. It is not a boss and AD relationship. I’ll always be there for them. That is the biggest reason for my success. When I first worked with Shah Rukh Khan...when we made our first promo of Chennai Express (2013), my team didn’t like it. We worked on it again. I have kept that open door policy.

But they are also certain that because you are constantly making film, they’ll have their jobs.

After Dilwale (2015), we decided to open our own production house. My team stuck to me. They didn’t work for any other production house.  There are some people who worked with my father, and are still working for me. It is indeed like a family business. Maybe this is due to the kind of journey I have had or my personal upbringing. I thank my mother for this. I always think that if a person is not working what would he do? I think from their point of view. There are few people who’ve crossed their boundaries, and so I must have fired them. Now if there is a nice guy who doesn’t have much of a job, I’ll still keep him.

I do this with junior artistes, fighters, dancers. After a point, [when they get old], fighters and dancers would struggle to get work. How will they run their house? When I’m shooting an action sequence, or song, there 50-100 people who don’t have work. We call them from the association and we pay them.

[The discussion was opened for interaction with the media and audience]

Well, you have to be the audience. You have to have a connect with them. With me it is easier as I strongly connect with my audience. Doing television has helped me as people know this is Rohit Shetty. I’m also afraid for the day when I make a bad film, they know how to criticise. I do lot of research, I have been to the BARC (Broadcast Audience Research Council) [to know] what is working, what is it that the Indian audience is watching, their likes and dislikes...

When I was doing Golmaal 3 (2010) one person came [up to me] at the airport saying he liked my film. He said his father had passed away around 40-45 days ago, and his mother was in depression. First thing he did after 40 days was to take his mother to watch for Golmaal 3 and for the first time in over 40 days, he saw her laughing. One person had told me that his child doesn’t eat food till he watches Golmaal Again (2017). All this helps, as you learn that what you are doing is right for them.

Not an action sequence, but I had planned this normal scene in Chennai Express (2013). I could have shot it in any platform. We selected this location at Dudhsagar Waterfall. You can’t go [there] by road, but only train. So, we were about 700 of us. We travelled early morning at around 7am. Deepika Padukone got her make done during the journey. The train dropped us at a particular point. We used to shoot without the train, which came back at 3pm. pm. We had a window of one hour to shoot with the train. Food was an issue there. The cook usually made the food at around 1.30am-2am in the night. Having it after a few hours it didn’t taste right. Shah Rukh Khan came to me and said, we will not eat food for seven days, we'll survive on chips and biscuits.

Given your experience in action sequences, is it easy to shoot them?

No, it is difficult. I have done action with Shah Rukh Khan, Ajay Devgn, but it's the first time that I’m doing it with Ranveer Singh [in Simmba]. It’s perhaps the first time that Singh will be doing hand fights, hardcore commercial action. It is a challenge as to how to present Ranveer Singh in the film, how to train him in the film. It shouldn’t look like any other action that I have done earlier.

Biopics have become a trend. Have you ever thought of making one yourself?

Hain! Biopic! [looks stunned]. I’ll have to think about it. If ever I want to make a film, I would want to make it on Shivaji. I know the history well. There is time though, it needs a lot of money. As for the trend, well as long as people are liking it, these films should be made.

You work with superstars. Have you ever thought of directing a small budget film?

I’m not sure about directing, but I’d like to produce it. If I have to direct it then my PR team needs to be active to tell that it is not really a Rohit Shetty film. I don’t want people to come with usual expectations, and then say what has he made. I’m just worried about that. I don’t want to cheat my audience.