Why Sanya Malhotra feared she would bore Radhika Madan, even irritate her


Given that Madan is an extrovert, and outspoken, the Pataakha (2018) actress feared she would not be able to gel with such a firebrand.

Zaira Wasim went on to do another film with Aamir Khan, Secret Superstar (2017), while Fatima Shaikh will be seen in the superstar's Thugs Of Hindostan (2018). The two Babitas, however, have been quiet after Dangal. Maybe Bhatnagar is busy with her education, but it has taken Malhotra two years to come up with her next.

Titled Pataakha, the Vishal Bhardwaj film sees Malhotra in another rustic avatar, but this is no tale of sibling revelry. Malhotra plays Genda, little sister and sworn rival of Champa (Radhika Madan). 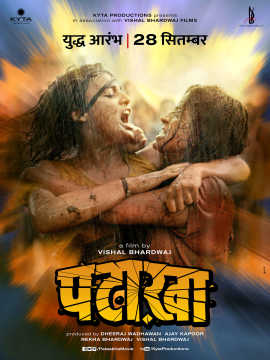 Pataakha is set to be released on 28 September. A couple of weeks before the film's release, Madan and Malhotra stepped out to promote their film.

Malhotra had dyed a large part of her hair in gold and wore a bright orange shirt dress with pleated sleeves, quite a contrast to her screen image as Babita Phogat. But in the brief group conversation, she came across as a shy, grounded young woman who is desi at heart.

Malhotra shared her Pataakha journey and praised director Bhardwaj. She also told us why she feared she would not gel with Radhika Madan in real life as well. Excerpts.

We saw you in Dangal (2016), where you played the younger sister.  Now, joh badi behen ki kutai wahan na ho saki [the beating you could not hand out to your older sister there], you are getting to do it in Pataakha, right?

(Laughs.) Let’s just put it this way. Dangal and Pataakha are two vastly different films. I wouldn’t compare them. A Babita would never talk to Geeta the way Genda talks to Champa in Pataakha. Babita would never dare to take on Geeta. She would get a beating from both Geeta and [their father] Mahavir Singh Phogat.

As Sanya, I could relate to her character, but I can’t relate to Chutki at all. I have fought with my sisters, but there is something so spiteful about Chutki. She is so aggressive, so loud, she is just exaggerated, which I’m not. So, mentally, it was tough to play Chutki.

What was your first reaction when you heard the script? I reckon this is a first-of-its-kind sibling rivalry film in Hindi cinema.

I remember getting the narration, and laughing and how. It was amusing during the audition. These sisters are fighting for stupid reasons. As children, we have fought for silly reasons. When Vishal sir narrated the script to me, I laughed. I also cried, because it is not just about two sisters fighting. They have a really different story altogether. The story is also inspiring. Never experienced such mixed emotions after listening to a script.

When Radhika spoke to us, she said she was disappointed that you turned out to be this shy, introvert. What impression did she leave on you?

When I first met Radhika, I found her to be an extrovert, happy-go-lucky girl. She is chilled out. Bilkul pataakha [absolute firecracker]. You look at her and feel she is perfect to play Badki. I am not like that. It takes me time to mingle with people. I’m shy.

When I met Radhika, I felt that I will be boring her, that she would get irritated with me or I will get irritated by her. I never thought I could get so close to her. After a few days in the workshop, I realized that we have a few similarities. We bonded on Vishal's music and ghazals.

I think being close off screen helped us. If we were fighting off screen too, there would have been no chemistry between us.

I wonder whether the wrestling you learnt during Dangal came in handy for this film.

Not at all. Dangal was very technical. We had to train for that part. Out here, you are throwing everything — slaps, punches, kicks, pulling hair. Now [pulling hair] was tough because I was donning a wig in the film. This is nowhere like what I have done in Dangal.

What kind of prep went into this role?

As I said, I am nowhere close to Chutki. So for me to get out of Sanya, my comfort zone, was tough. The workshops with Atul Mongia, Vishal Bhardwaj helped. And we visited the village of [author] Charan Singh Pathik. We interacted with the local women. We were literally living like Badki and Chutki. That helped us get into the skin of the characters.

Make-up and hairstyling also played an important role. This is costume designer Karishma Sharma’s film. When you see the film, you will realize what a terrific job she has done. Our characters live through four stages — childhood, teens, marriage and motherhood. Our look is different in each phase. We had to put on 10 kilos for the second half of the film. That is the time when we become a little lethargic.

What was the experience of working with a director like Vishal Bhardwaj? 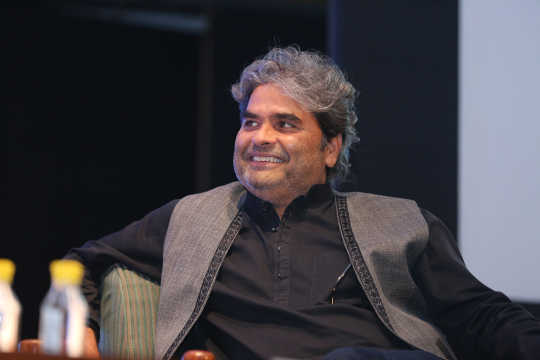 I was shooting for Badhaai Ho (2018) in New Delhi. I got a call from my manager that Vishal sir is making a film about two sisters and wants me to audition for one of the siblings. I never thought he would pick me in the film. I felt this audition was a good way to show him my skills. I thought he might take me for another film. I was of the view that it is too early in my career to work with a director like him.

The first thing Vishalji told me was that I need to put on 10 kilograms if I want to come on board this film. It was a no-brainer for me as I would have never said no to him. I chopped my hair in my first film, so gaining weight should not be a problem. And I’ll do it for a director like Vishal Bhardwaj.

A day before the audition, I remember rehearsing the lines. It was my birthday. I had taken a couple of days off from the Badhaai Ho shoot. I got a call from him in the evening saying I hope you don't have any problem with the dialect, I’ll help you out with the rehearsal. It was a huge thing for me for a director like him to call an actor who is auditioning for him. I wasn’t even selected. But he rehearsed with me for one hour. He told me the backstory, and the next day, when I gave the audition, he messaged that night appreciating my audition. I was thrilled.

You spoke about gaining weight. How did you gain weight and then how did you lose it?

What Vishal sir wanted was that something extreme happens in the script and there should be an extreme difference from how we look in the first half of the film. We only had one month to gain as much weight as we could. There began our beautiful journey of gaining weight. We gorged on food. For breakfast, we had chole-bhature, then pancakes, ice-cream shakes, fries, all the bad stuff. I used to make sure I add some healthy stuff to my diet.

During breaks [on sets] we were constantly eating. Usually, if you are shooting back to back, you tend to skip food and lose weight. But here it was different. My morning started with six pancakes, Nutella, ice-cream/dried fruit shake, butter chicken, pizza, etc.

After hogging so much in a month’s time, I got fed up with eating. I was then fine eating dal-chawal, ghee and khichdi. After putting on weight, I weighed around 62kg.

What was the experience of working with a comic actor like Sunil Grover?

I have always admired his work. I was very inspired by his Rinku bhabhi act. I have listened to his song, 'Mere Husband Mujhko Pyar Nahi Karte', many, many times. The moment I got into the second half of the film [as a wife], I used to listen to that song, just to get into my character.

Dangal was this gigantic hit. Zaira Wasim, Fatima Sana Shaikh, and you burst into limelight. I am sure you must have been flooded with offers. But after such a phenomenal debut, how tough it is to choose your second film?

I never really worry about that. I am grateful to have started my career with Dangal. That is the perfect debut an actor could wish for.

My worries ended with the first film. I wanted to be an actor since I was a child. That dream was achieved through Dangal.

I thought, let’s not worry about my next. What I kept in mind was that whatever I am going to choose next should be instinctively. I should trust the script, more importantly, trust my craft, that I would be able to pull off a certain character.

I wanted to take things slow. There were more than 10 people in my ears, telling me you have not signed anything after Dangal. I used to be asked why I’m not getting any work. My answer was, “I am getting work, but good things take time. You have to wait."

So, is there any role, film, or genre you would like to take up in the future?

I would like to take a sabbatical very soon and go and learn something new, whether it is a new dance form or anything related to filmmaking. I will be doing that. Life is too short, so I don’t want to be stuck to one thing.

In the 1980s and 1990s, a film like Pataakha would have been classified as 'parallel cinema'. Today, things are different. Do you feel content with the kind of response the trailer of this film has got?

Yes, things are changing. We get to see less of over-the-top dramas. People are talking about subjects they are concerned about. I think it is a golden era for 'Bollywood' now. We have woman-centric films. When I see people eagerly waiting for Pataakha, I feel really proud. The audience wants to see things which they can relate to.