An advocate had filed a complaint against Salman and the team of the film while the Vishwa Hindu Parishad (VHP) and Bajrang Dal (BD) has burnt the actor's effigy.

After vehemently defending the title of his latest production, Loveratri, Salman Khan has now gone ahead to change it to Loveyatri: A Journey Of Love, to ensure a smooth release. The film, which features debutants Aayush Sharma and Warina Hussain, had kicked up a controversy for allegedly 'hurting' Hindu sentiments as the title rhymes with the Hindu festival, Navratri.

Khan announced the change of title on his Twitter page, while also releasing a new poster of the film with the new title. He made light of the change by writing: “This is not a spelling mistake... #loveyatri #lovetakesover...”

An official note from the production house doesn’t mention a clear reason behind the change. “The name change has been a decision to showcase the story more prominently. ‘Loveyatri’ – A Journey Of Love stands true to its name and brings about a fresh view on the whole perspective of love,” said the press note. 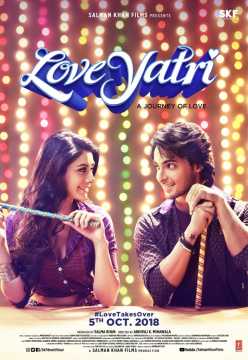 However, Ronit Roy, who also stars in the movie, has indicated that some 'external forces' are behind the change. "So now #Loveratri is #Loveyatri due to external influences. This doesn’t at all take away from what @BeingSalmanKhan told me the other night and I quote “I will always make clean family films like the ones we used to love going to the theatres to watch” So go. Watch PURE LOVE!," he said on Twitter.

So now #Loveratri is #Loveyatri due to external influences. This doesn’t at all take away from what @BeingSalmanKhan told me the other night and I quote “I will always make clean family films like the ones we used to love going to the theatres to watch” So go. Watch PURE LOVE!

In May this year, the Vishwa Hindu Parishad (VHP) had objected to the title of the film, alleging that it hurts the sentiments of Hindus since it rhymes with the festival, Navratri. Members of the VHP, along with members of Bajrang Dal, burnt an effigy of Khan in Agra last week.

Earlier this month, based on the promos of the film, a lawyer from Bihar filed a complaint in a Bihar court against Khan, Sharma, Hussain, actors Ram Kapoor, Roy and director Abhiraj Minawala for allegedly promoting vulgarity and denigrating Goddess Durga.

Recently, the Muzaffarpur district court recently ordered an FIR (First Information Report) to be filed against the aforementioned crew on the basis of the complaint.

Interestingly, Khan had defended the title of the film during its trailer launch. He had said, “Some people, I don't know who they are, have some problem with title of the film. It is a beautiful title. There is nothing more beautiful than love, so it is called Loveratri. It is not demeaning any culture. Our prime minister is from that culture. So, when you play a character, like I played a sardar in a film or I played a Haryanvi in Sultan, I do it with a lot of respect [sic].”

He also added that there is nothing controversial in the content of the film. “We are making the film with Navratri in the backdrop. We have made this beautiful film celebrating the music, colour, love and the fun of festive season. We don't need any publicity like that. Once the film is released those people will know there is nothing, added Khan.

Loveyatri will be out in theatres on 5 October.