The writer has alleged that instead of giving him credit for story and screenplay, the producers have simply acknowledged his contribution with a mere "based on Roshni", a story written by him.

Director Shree Narayan Singh’s Batti Gul Meter Chalu is set to be released on 21 September. The film was mired in financial issues between the earlier producer KriArj Entertainment and T-Series, who are now producing it with Shree Narayan Singh's KRTI Pictures.

With barely 10 days left for the release, the film has found itself in another controversy with writer Vipul K Rawal accusing director Shree Narayan and writer duo of Siddharth Singh and Garima Wahal of denying him credit for the story and screenplay.

T-Series has credited Rawal by acknowledging that their film is based on Roshni, a story written by Vipul Rawal. It may be recalled that the film was conceived with Roshni as the working title.

“I had written my story in 2009.  I had narrated my script to a lot of directors. Finally, it was the producer Prernaa Arora of KriArj Entertainment who accepted my script. Shahid Kapoor had agreed to come on-board after I narrated the script to him. T-Series came on board as producer later on, and then the film was mired into financial disputes. My agreement was with KriArj Entertainment, The script underwent lot of modification. My story was initially set in an urban town, but they [Singh, Siddharth-Garima] changed it to a small town,” alleged Rawal. 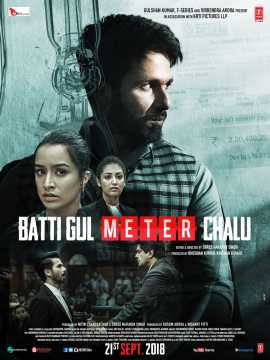 Given the legal mess, the film found itself in, Rawal had lost hopes of the film coming out at all. Before the film’s first poster came out, Rawal learnt that the poster would not have his credit for story and screenplay. “I was shocked to know that I have no credits in the story or screenplay. I then wrote to Bhushan Kumar [T-Series head honcho] who had assured me that I will get the solo credits,” says Rawal.

“The teaser came out but nothing changed. I wrote another e-mail to Bhushan [Kumar] ji. Now I was ready to let go of the solo story credit and was more than happy to share the story and screenplay credits, with my name coming up first. Even after diluting my credit, they still don’t have the courtesy to mention my name as the writer. I would have let go of all credits, if only they [Shree Narayan, Siddharth-Garima] had requested for it. But what gets my goat is that when I read about them talking in the press about how they have researched on the subject,” said a miffed Rawal.

Rawal, who has earlier written Rustom (2016), has claimed that he had not just given the concept to Shree Narayan, but also a 100-page draft. “I gave him [Shree Narayan Singh] the fifth draft. The story is about a crooked lawyer who fights the electricity company after his friend dies. They retained the entire story and just shifted it from Mumbai to Dehradhun. How are they claiming that the story is theirs?”, Rawal questioned.

As seen in the trailer, the character of Divyendu Sharma does come across as one who commits suicide over exorbitant electricity charges. Rawal has pointed out seven alleged similarities between his script and the visuals seen in the trailer and other audiovisual promos. He listed them as follows:

Point 1 - Hero is a blackmailing lawyer
Point 2 - His best friend is struggling with his business
Point 3 - The heroine has a soft corner for the friend, but all three are good friends
Point 4 - Friend dies
Point 5 - Hero then fights a large electricity corporation
Point 6 - At some point Hero goes to jail
Point 7 - The fight is regarding electricity bills and the corruption in the power companies

“Even the points which are used in the courtroom arguments are from my script,” said Rawal.

We tried calling writers Siddharth-Garima, but there was no response. Director Shree Narayan refused to comment on the matter asking us to speak to his business partner from KRTI Pictures, Nithin Chandrachud.  When contacted, Chandrachud simply said, “I will speak at the appropriate time.”

Rawal will be meeting T-Series officials soon and is confident that the matter will be resolved amicably. However, if doesn’t, he plans to move the Bombay high court. The writer is in no mood to forgive Siddharth-Garima and Shree Narayan.

Perhaps, in a first-of-its-kind, Rawal is making a full-length feature film to expose other writers and a director. The film will be on one of the leading digital platforms.

“All this gave me a wonderful idea for a script. A stupid director and two dumb writers steal the script of a brilliantly original writer and how that writer takes his revenge by making them a laughing stock. I intend to release it digitally. The funding is in place and I have already done the muhurat! Naturally, this is based on recent events that happened in my life,” quipped Rawal.

Rawal was forced to take this bizarre step after his efforts to reach out to Siddharth-Garima didn’t yield any response. "Even after my muhurat, when some senior industry people urged me to give them one chance, I sent them an email asking to come and meet me. They chose to ignore it. In a way I am glad because this story needs to be told,” Rawal concluded.