The trailer was launched at a star-studded event at the Kolkata address where the sanyasi/zamindar spent his last days.

A scene from Ek Je Chhilo Raja
give your opinion

The trailer of Srijit Mukherji’s upcoming courtroom drama Ek Je Chhilo Raja was launched yesterday at 112 Ripon Street, the house in Kolkata where the Bhawal sanyasi raja used to live on his visits to the city and where he spent his last days.

Ek Je Chhilo Raja is about the Bhawal sanyasi court case of the 1930s that created a storm in the country and is one of the most cited cases in legislative history.

The trailer begins with a clock ticking in the background and the famous quotation from the Sherlock Holmes mystery The Sign of the Four (1890), "When you have eliminated the impossible, whatever remains, however improbable, must be the truth”. 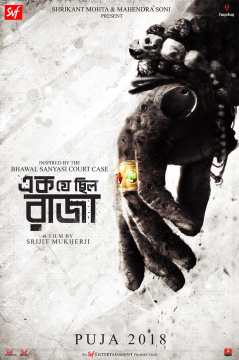 Then, the voice of the lawyer played by Anjan Dutt dramatically summons the 'dead body' of raja Mahendra Kumar Chowdhury. The trailer then introduces the king, played by Jisshu Sengupta, of the Bikrampur estate. With glimpses of his prosperous days, it shows the benevolent facet of a king, a loving brother and a man who is loved by women.

Destiny leads the king to his death, but he survives and emerges as a sadhu (Sengupta). While his sister (Jaya Ahsan) keeps faith in his survival and continues to look for him, the sadhu spends his days in deserts, crematoria and other obscure places.

The chronicle of his journeys is cut midway and the story shifts to the court, where the lawyer for the other side, played by Aparna Sen, tries to prove the sadhu is an impostor.

Several witnesses then give testimonials which give rise to a heated conflict in court. The rest of the trailer shows snippets of the 16-year-long trial as the Bhawal sadhu seeks to reclaim his territory from the British. The trailer ends with the king taking a dip in the river and emerging as a sadhu.

The trailer hints at the grand setting of the film with elaborate sets and a star-studded cast. Mukherji has attempted to recreate the era of the Raj and the journey of the Bhawal sanyasi, shooting in real locations and paying heed to every possible detail. Now the audience will have to wait till Durga Puja to see whether the grandeur justifies the conflict inherent in the story.

"The much-awaited trailer of one of the biggest courtroom battles in history is here and I am excited and overwhelmed to witness it at the abode of the Bhawal raja with my cast and crew," Mukherji said.

"The trailer speaks volumes for how the audience will go through a nail-biting journey to decide which side they will choose. All questions will be answered this October,” the director said.

Ek Je Chhilo Raja is slated for release on 12 October. Watch the trailer below and tell us what you think of this film's box-office potential.