It's a reflective reaction to all the romantic films I've seen: Aadish Keluskar on Jaoon Kahaan Bata Ae Dil


The director of Kaul (2017) spoke to us, describing the journey of exploring the idea of romance and gender equations through an 'anti-romantic' film.

"You are going to die alone," spits 'Pagli' resentfully at one point in the trailer to Aadish Keluskar's Jaaon Kahaan Bata Ae Dil. The trailer captures a to and fro of conversational battle as the man and woman in love, argue, cuddle, curse, and debate their approach to life, love and the world around them.

The film, directed by Keluskar, is premiering in the India Gold Section of the ongoing 20th Jio MAMI Mumbai Film Festival. The film has also been nominated for the Oxfam Best Film on Gender Equality award.

This sense of constant conflict and dissonance is a theme that has persisted through Keluskar's earlier film, Kaul (2016), as well. The filmmaker, who dropped out of FTII (Film and Television Institute of India), explains that the film is 'anti-romantic'. 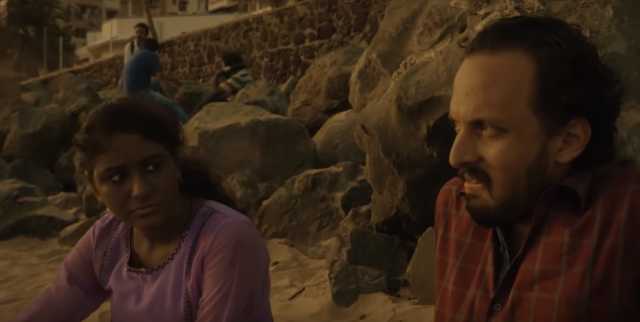 Like Richard Linklater's defining trilogy, the film has a conversational format that allows its characters to extrapolate their own ideas, philosophy, and politics while debating love. This, Keluskar adds, was done to explore 'word as music'.

"This was, for me, dialogues as music of some sort. Disturbing, dissonanting, but music nonetheless. I was looking at sound from that perspective as far as the conversational film is concerned," he said.

Speaking with Cinestaan.com, Keluskar elaborated on the nature of his film, the experiments within, and its status in view of the #MeToo movement.

Competing in MAMI again. Kaul: A Calling (2016) saw a good reception. Are you excited for this film as well?

Yeah, yeah. It feels that the word that you want to communicate is finally getting a release. So it's great.

The film also has a nomination to the Oxfam Best Film on Gender Equality award. How did that feel?

The film actually explores gender equality in a different sense. I always believed that to fight a negative idea, you must investigate it first. This is where we have tried to explore the way chauvinism has seeped into the film. It is about the relationship, and how intimate and drastic it can be, and what kind of graph it can have. I am glad that even such a perspective is being considered for a gender equality award. It feels like one more revolution.

This film reminds me of the short film, I Love You Too, with the debate about love. The external manifestation of insecurity, the debates. Or is it entirely different?

Not exactly. This one is more a conflict between romanticism and cynicism. How they are trying to convince each other of their own perfect idea. Cynicism in the male character, and the romanticism in the girl's character. The guy is a combination of a lot of things which also includes chauvinism and misanthropy.

How did you come upon the idea?

The screenplay came to me from the subconscious. Since I am a writer-director, I expressed it through writing. If I was a violinist, perhaps it would have come out in the form of a composition. The first draft came, complete screenplay with dialogue just came as an attack. It was more like writing a poem.

It was only after you write it, you have to decide what you have to do with it. Only then do you start to re-look at what you have actually written. At that time, when I started analysing where are these characters coming from, I realised that over a period, the years of my life, I have seen these people. I have heard about them, directly or indirectly. They are composites of lots of emotions and rhythms in both genders, sometimes inter-crossing.

In Kaul: A Calling (2016), the sense of existential crisis, the constant theme in I Love You Too as well.. Is that a philosophy of your writing?

Consciously, no. Subconsciously, it seems that there are some stories I write in a very bland way. Kaul was one. I Love You Too was one, and this one is as well.

The dissonance between sound and visuals are another striking feature in the trailer. The classical music in the background of the trailer is a contrast to the argumentative words between the characters. Talk us through it.

Sound can be taken in different ways. For Kaul, I was looking at the psychological manifestation of sound from the protagonists' perspective.

Words, for some reason, are not considered as pure cinematic art. People keep saying 'it is a visual medium. You must say as much as possible through audio and video.' Forgetting the fact that words are also a manifestation of sound, depending on how you treat them.

This was, for me, dialogues as a music of some sort. Disturbing, dissonant, but music nonetheless. I was looking at sound from that perspective as far as the conversational film is concerned.

The texture of the sound reality in which it (the film) has to be set in is all real locations. We had a really amazing sound recordist and designer, Shishir Kundalkar, who maintained that it won't be a crystal clear location recording as such.

Once you set the naturalistic ambiance, how you play with the mood of the characters using sound is what Shishir did.

Is it just me or does the trailer have a sepia tint to it?

It is called sepia tint, for the lack of a better word, but in the colour business, we call it tungsten feel. Tungsten, the yellow colour is, according to colour theory or psychology of colours if you may, goes towards the melancholy part of the human spirit. We felt that the overall condition of the characters and country in which they are living, we felt that it is the right colour. The noise, for me, is very interesting. It is there in the sound, the feeling, the thoughts and mind, I thought that visually also it is necessary.

Where would you place the film in terms of genre? Kaul was more of a psychological and philosophical film, but this is a bit of both...

As an audience, or even creators, why are we fairly limited in experimenting with the audio-visual medium of cinema?

At the same time, there is a difference between a movie and a film. In a movie, you are supposed to feel something specific about the theme and the whole movie, as in the tradition of David Fincher or Alfred Hitchcock. The audience might feel it to different degrees, but they will feel the same thing the director wants them to feel. There is a level of excellence in that. From Karan Johar to [Rajkumar] Hirani to Fincher, directors have experimented with that.

Then, there is something called a film, for the lack of a better word, where everyone watching might have a different interpretation or rhythm of what they are watching. The filmmaker makes sure that they have that breathing space.

If one is trying to make a movie, then unless for style's sake, they are not going to investigate the audio-visual form. But that's their choice, and I respect that. In addition, there is so much of audio-visual exposure that people have, even before coming to the theatre, taking their attention for that time and making them feel an emotion is quite a big deal in my opinion.

The arrival of the film in the middle of a raging #MeToo movement puts the arguments between your characters in a different light. Is that a coincidence, preferable or were you consciously pursuing the subject in your film?

I can never say anything purposely because it arises from my subconscious. It is just that the characters that came out of me and their interactions...First of all, #MeToo, in my opinion, is probably the most important social movement that has happened since JP's Total revolution in the 1970s. It directly challenges the mindset. At the same time, the movement which happens challenges a particular sector — the Green Revolution or the IT Revolution for example. It is sector based.

This is a mindset based movement. It is directly opposing the mindset, and that is a damn good thing and important thing. It is also an organic thing, because, considering the patriarchy in India, it is going to come out. I hope that it fundamentally changes the system for many decades.