15 years of Baghban: Decoding its similarities with the Marathi film Tu Tithe Mee


The plot of the film, starring Amitabh Bachchan and Hema Malini, was similar to a film released five years earlier.

In Baghban (2003), director Ravi Chopra portrayed what an aged couple endures at the hands of its own children. The film, starring Amitabh Bachchan and Hema Malini as the elderly couple, was a rare film looking at a social issue faced by people from a rich family. The film, along with the performances of the lead pair, moved the audience to tears.

Baghban completes 15 years today (it was released on 3 October 2003). And even after a decade-and-a-half, it continues to move its audience whenever it is aired on television.

The film is about Raj (Bachchan) and Pooja (Malini) Malhotra. Raj has had a successful career. But after retirement, he is compelled to vacate the house he and his wife have been staying in. The couple decides to spend their twilight years with their sons Ajay (Aman Verma), Sanjay (Samir Soni), Karan (Nasir Khan) and Rohit (Saahil Chadda). Raj and Pooja have made a lot of sacrifices to ensure their sons lead a good life.

However, they are in for a rude shock when their sons decide to split their parents and switch one of them among themselves every six months. The sons feel the couple would not agree to this arrangement, and go back to live alone somewhere. But Raj and Pooja agree hesitantly. 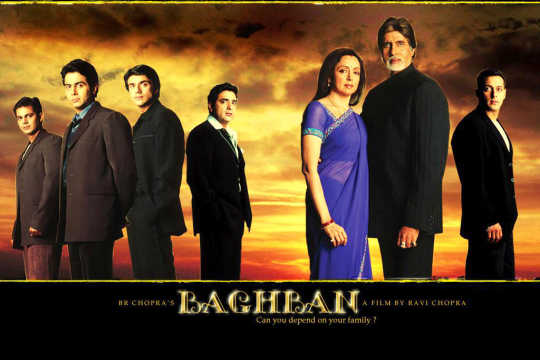 Meanwhile, Raj has an adopted son Alok (Salman Khan). He was an orphan who received financial and emotional support from Raj, which enabled him to grow in life. Alok and his girlfriend (Mahima Chaudhary) almost worship Raj and Pooja. They are the ones who look after the couple as their own when their children turn their back on them.

Raj notes down the sorry tale of his wicked sons and their families in the form of a novel titled Baghban, which becomes a bestseller. All of a sudden, Raj becomes a famous author. Looking at his success, his sons try to patch up with their parents. However, Raj and Pooja have had enough.

The story of loving parents being forced to separate from each other came as a rude shock to the audience. Their sorry situation, reunion and the emotional climax struck the right chords. Baghban was also a rare Hindi film that portrayed romance between an aged couple.

However, unknown to the audience from the Hindi belt, a Marathi film with a similar storyline was released five years before Baghban. Director Sanjay Surkar’s Tu Tithe Mee (1998) also showed an aged couple in similar circumstances.

After retiring from work, Nanasaheb Date (Mohan Joshi) is looking forward to spend the rest of his days with his wife (Suhas Joshi) while enjoying the simple pleasures of life. But one of his two sons (Sunil Barve and Anand Abhyankar) gets transferred out of the city. The sons and their wives decide that Nanasaheb should stay with the elder son and their mother with the younger. Just like the characters in Baghban, Mr and Mrs Date get separated in their old age against their wishes.

But that’s not all. The Date couple have strong affection for an auto rickshaw driver (Prashant Damle) staying in the same building. They don’t officially adopt him, but treat him like their own son. The couple also help him elope and get married to his girlfriend.

Although there is a lot of similarity in the plots of both films, the treatment is where they differ a lot. The two sons in Tu Tithe Mee somehow understand their fallacies in the end and the couple forgives them (in the very last shot). They unknowingly get carried away in their personal lives and don't realize what they are doing with their parents. Hence, their act was relatable, realistic and natural.

On the other hand, Verma, Soni and Khan’s characters in Baghban are shown to be negative and, at times, cruel. On some occasions, their acts appear forceful. For example, a fairly rich Sanjay refusing to get Raj’s spectacles repaired due to a financial reason is difficult to believe. Plus, how his grandson gets them made from the money he was given to spend without the optician’s card is also a mystery.

It would be unfair to accuse Baghban of copying Tu Tithe Mee because according to film expert Rajesh Subramanian, BR Chopra had planned to make this film in the 1980s with Dilip Kumar and Rakhee in the lead roles.

Interestingly, the other similarity in both films is Mohan Joshi. The actor who played the lead in Tu Tithe Mee played a small role of a hotel owner in Baghban.