On the 15th anniversary of the film, in a candid chat with us, Avik Mukhopadhyay and Arghyakamal Mitra discuss the significant departures that the film took, under Rituparno Ghosh’s direction.

Chokher Bali was Rabindranath Tagore’s first complete novel published in 1903. The novel attracted a lot of controversies, as it openly dealt with the autonomy of a widow (Binodini), in terms of both spirituality and physicality for the first time. The beauty of the story lies in the complexity of the characters against the backdrop of emerging women education and swadeshi movement in the British India.

100 years later, the novel was adapted into big screen by Rituparno Ghosh, who managed to recreate the volatile atmosphere of 19th century with utmost detailing and the right amount of complexity. Aishwarya Rai Bachchan delivered one of her finest performances as Bindodini. Prosenjit Chatterjee brought a major shift in his career built on commercial films as the egoistic self-centred Mahendra. Raima Sen stepped into the Bengali film industry as the naïve Ashalata and Ghosh made his mark as a bold and sensitive filmmaker, who continued to challenge norms through his films in the following years.

Ghosh had a fantastic team working with him on Chokher Bali. Avik Mukhopadhyay did the cinematography and Arghyakamal Mitra edited with Ghosh’s aesthetic vision.

On the 15th anniversary of the film (it was released on 2 October 2003), in a candid chat with Cinestaan.com, Mukhopadhyay and Mitra discuss the significant departures that the film took, under Ghosh’s direction.

On the other hand, Mitra feels Ghosh took a brave step by casting Aishwarya in the film. “He cast Aishwarya in a role that was quite different from the ones she had been playing ealier. Not only was she acting in a Bengali film for the first time, but she also played a character which Bengali readers were quite familiar with. Ghosh defied all the expectations of the Bengali audience and brought in Aishwarya.”

He added, “Also, in Rituparno’s sensibility, he was going to do something bigger than he had been doing till then, in terms of mounting, budget, look and everything else.”

Mukhopadhyay was part of the project since the beginning of making the film. “Actually we were collaborating in all the departments from the beginning. See, Ghosh not was not only retelling Tagore’s story; he was putting his own vision into it as well.”

Chokher Bali was also made within a limited budget. “Everyone wondered how he could manage to recreate that period with such a low budget. All I can say is that, Chokher Bali was the result of sincere efforts from each and everyone’s end,” said the cinematographer.

Mukhopadhyay mentioned how Ghosh’s understanding of that period helped in designing the film more than any technological application. “One basic understanding was clear in both of our minds. We perceived it as the story of a widow, who was on the verge of bringing a revolution or was trying to stand up against her status set by the society. The life of a widow is a colourless palette in the Indian scenario. But you will see the use of a lot of red colour in Chokher Bali."

“The period in which Tagore wrote the story, the significance of red or red-lessness was changing. Red was referred to as the colour of revolution. It is interesting to note how Ghosh infused the colour in a world that lacked it. The conflicts and contrast in the life of the widow was thus brought alive. That was the basic concept of the cinematography of the film,” elaborated Mukopadhyay .

In the film, while the colour red is continuously associated with Ashalata, Mahendra’s wife; Binodini wears a pale white rag throughout. A significant moment is when Mahendra brings a red blouse to Ashalata, who is not familiar with the western piece of cloth. It is a symbol of modernity, but Ashalata is shy of wearing it, rather keeping her chest bare. 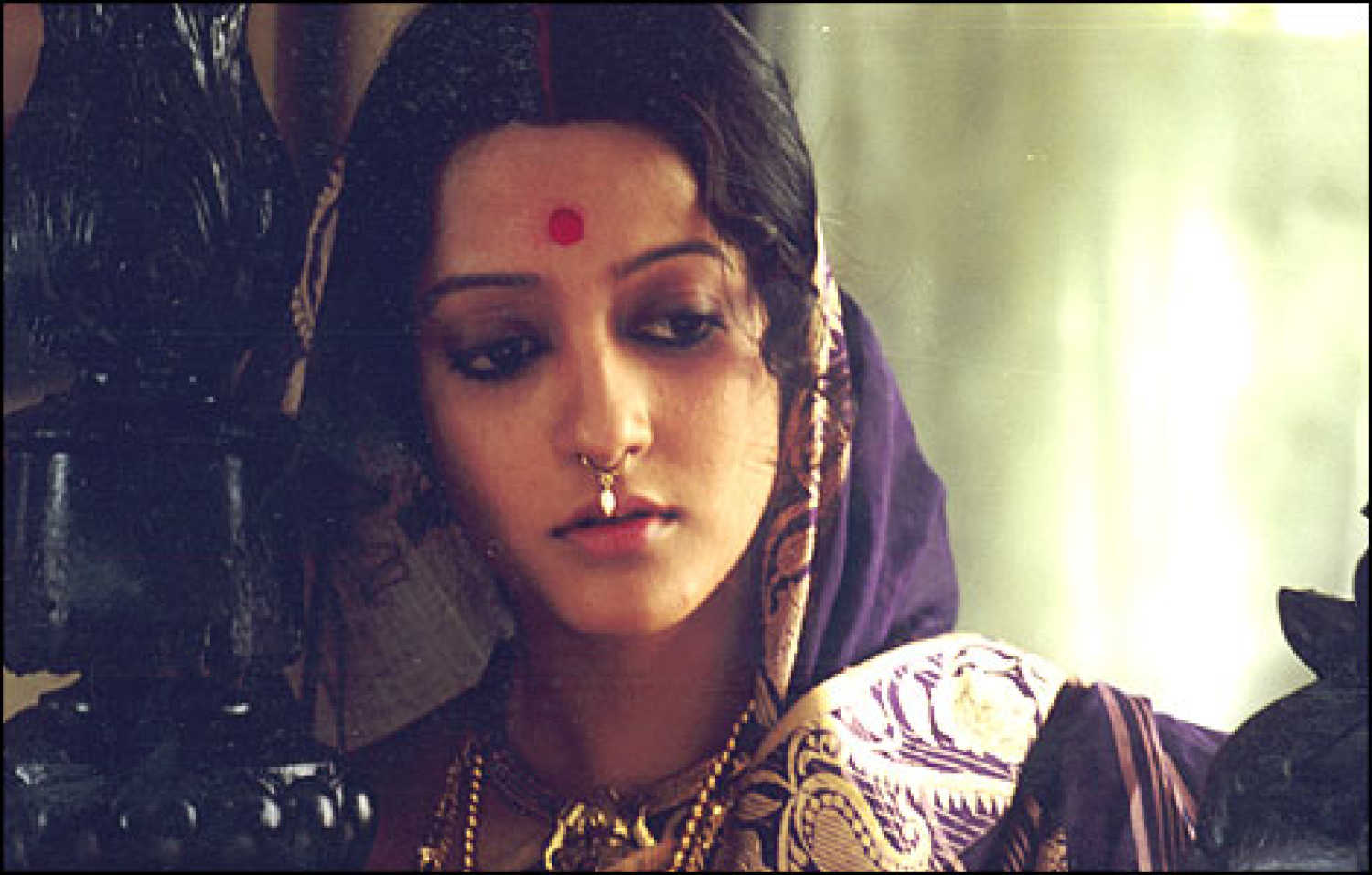 On the other hand, widow Binodini, who is well acquainted with western culture, knows how to wear the red blouse. In the film, Ashalata perceives her as a human being with desires for pleasure and happiness for the first time, when the latter teaches her how to wear the red blouse. Also, Binodini, who gradually grows jealous of Ashalata’s marital happiness, tells her not to remove the blouse at night when Mahendra urges to make love to her.

One of the most striking aspects of Chokher Bali is its detailing with depth that reflects a lot of research work done by the director. Mukherjee said, “See, when we say it is a 19th century film, we miss the fact that 19th century means a hundred years. Ghosh was very particular about the specific period from the 19th century that he was depicting in the film.”

Mukhopadhyay emphasized, “The way he visually portrayed that time span still remains unparalleled and I don’t think any other Indian cinema has done such a work that can be compared with Chokher Bali, in this regard.”

Mitra has a different take on the detailing of the design. "We had not seen the home décor, the clothes and everything else from that period. I would rather say that all the intricacies were brought alive with a lot of creativity in a way that they came close to our understanding and imagination of the reality of that period or they came to a verisimilitude,” clarified the editor.

“And of course, there are houses in Calcutta that date back to that period and make it possible to do recreate that ambience in them,” he added. 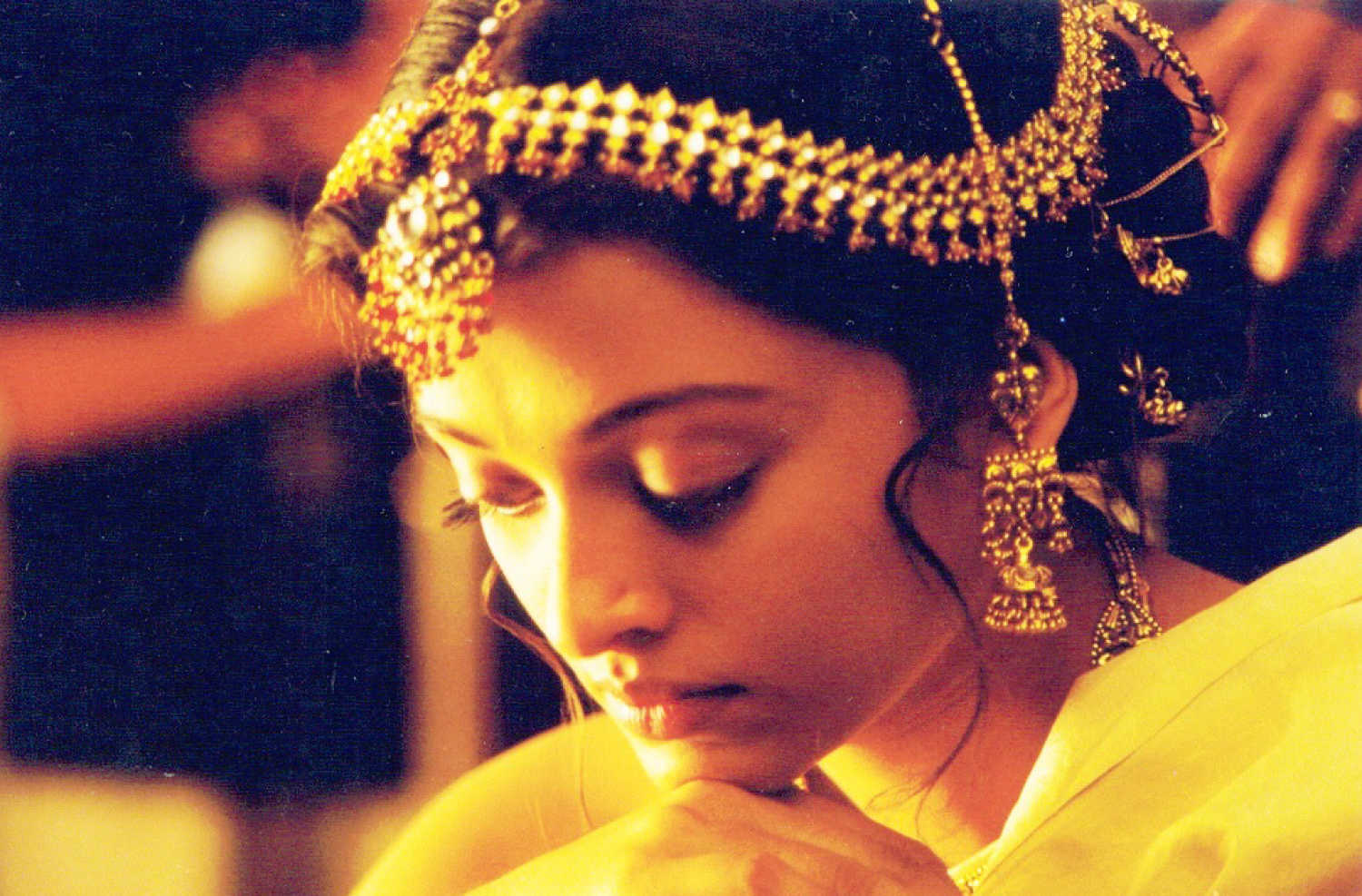 Ghosh had explained to Mitra that the film was going to be a departure from his earlier works that were mostly confined to the interiors of home. “He said even if he was shooting interiors, he would give it a lavish treatment because he felt that was the kind of a backdrop that was needed. Even during the post-production where editing was concerned, he would ask us to lend the film a rich tonality that was possible. He deliberately brought alive the grandeur with the specific use of lenses. He felt that all the emotional turmoil and interpersonal relationship would stand out very well against that kind of a layered background,” stated Mitra.

Ghosh used interesting camera angles, light set-ups and shots to allow the different layers of complexities inherent in the story. “He made it a point to achieve a certain kind of visual richness. Ghosh adopted an intelligent way of making the film to give the feel to the audience that the film was lavishly mounted,” said the artiste, who admits that he enjoyed the way Ghosh brought about the layers in the film.

“Whenever one attempts to make a period film, one gets carried away by the physical detailing and beauty of the frames and the shots. However, Ghosh turned that into the foundation of the film on which he built all the emotional struggles,” expresses Mitra. He feels, thus, Chokher Bali also turned into a film for the upper class Bengali; though, the film represented some of the crisis which did not really take place in the so-called upper class Bengali households.

According to him, the Chokher Bali team made sure to deviate from the pattern in which earlier films based on Tagore’s stories were made for the aristocratic Bengali audience and it was achieved with certain editing patterns.

Mitra feels that if Ghosh, who he considers to be the master of twists, would have been alive today, he would attempt to make the film again with a new narration and twists, stripping it of its earlier production design to lend it a contemporary treatment.