On her 27th death anniversary today (she died on 24 October 1991), we look at the rebellious writer and examine what message her mainstream commercial film, Sone Ki Chidiya, has for us.

For ardent readers of Urdu literature, the name Ismat Chughtai is a very familiar one. A rebellious, radical and progressive writer, Ismat Chughtai challenged the dictates of society with bold and realistic short stories and novellas.

The author's fight against the marginalization of women began at home. The ninth child in a large family, Ismat Chughtai refused to emulate her mother and older sisters in learning to cook and doing embroidery. Instead, she followed her brothers, enjoying the liberties that they were given.

At the age of 15, when her parents wanted her to get married, young Ismat vowed not to marry at all and instead pursued education.

In Chughtai's biography, Ismat Chughtai: A Fearless Voice, writer Manjula Negi quotes the writer as saying, "My sisters were very competent. Apart from Urdu, Persian and the Quran they were well instructed in embroidery, knitting and cooking. [But] I was neither in the habit of stifling my desires nor had I any interest in such activities."

After graduating with a bachelor's degree in arts from Isabella Thoburn college in Lucknow and doing a stint as principal at a school in Bareilly, she decided to pursue an engineering degree from the Aligarh Muslim University. But securing a seat was not easy, not least because women were not admitted to the institution back then, leave alone for an engineering course.

Chughtai and a few other women protested against this custom and were eventually allowed, with the condition that they would observe purdah at all times and occupy the last benches in class, behind the men. Ismat Chughtai thus became the first Muslim woman to have two degrees to her name.

It was at this time that she became acquainted with the Progressive Writers' Association and met Shaheed Latif. While Chughtai had already made a name for herself in literary cirlces, Latif was a man with ambition in cinema.

"He was doing his MA and I was doing my BT," the biography quoted her as recalling. "Then I once had a cursory meeting with him in my heart. After that he came to Bombay and joined Bombay Talkies as a scriptwriter for the sum of Rs225. I met him again when I reached Bombay as a schools inspector and started living with my brother."

They were married on 2 May 1942 and Chughtai began her exploration of cinema as she and Shaheed Latif co-founded a production company called Filmina. Under this banner, they made numerous films, including Ziddi (1948), Arzoo (1950), Buzdil (1951), Fareb (1953), Society (1955) and Sone Ki Chidiya (1958). While Chughtai wrote the screenplays and produced a few, Latif held the directorial reins.

Chughtai's literary works had strong women re-examining their status in society, at home and in the bedroom. However, her screenplays, more often than not, focused on society. One such example was Sone Ki Chidiya, which she wrote and produced. 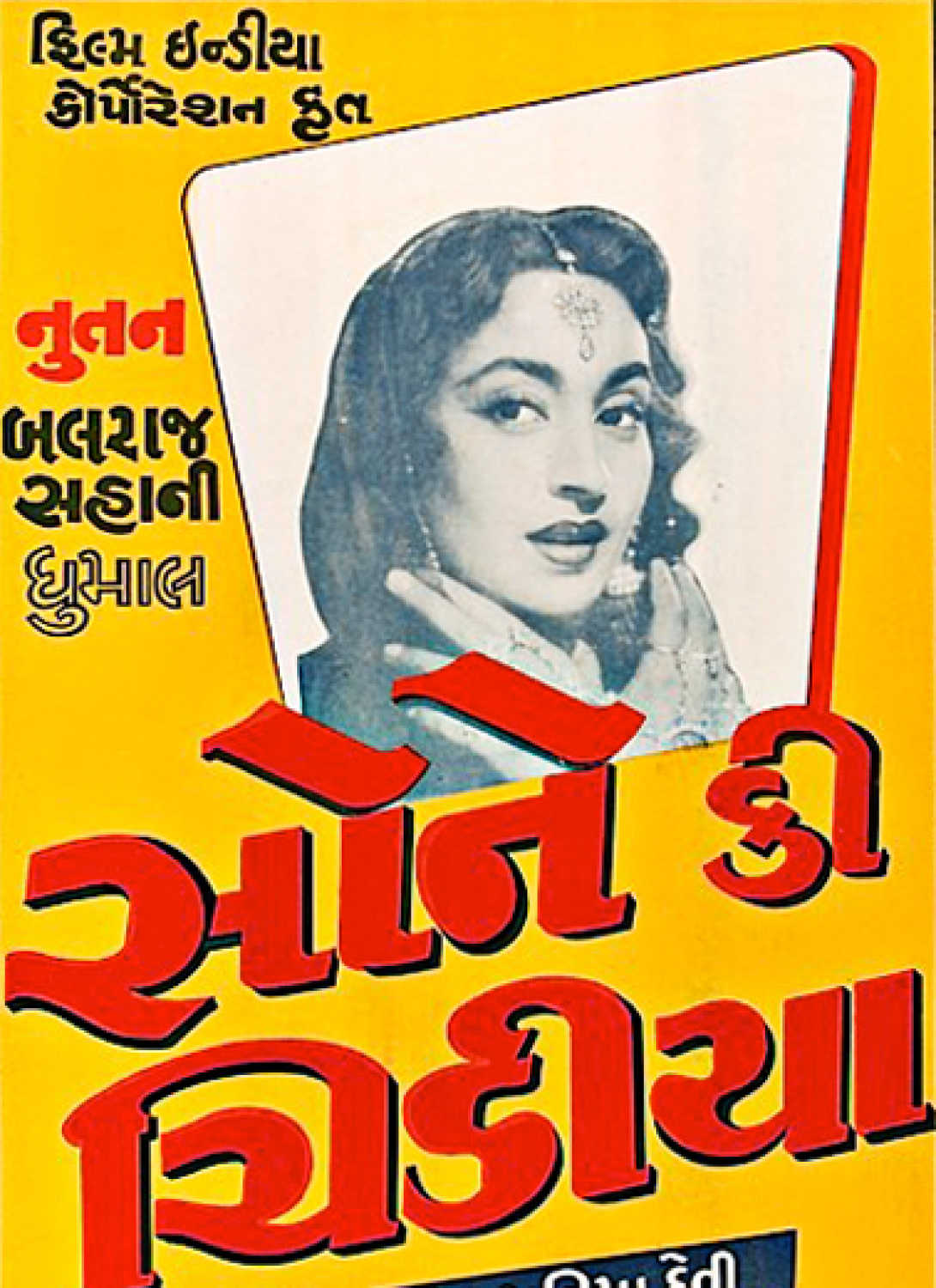 The film, which was released in 1958, was a mainstream commercial feature starring Nutan, singer Talat Mahmood and Balraj Sahni. Sone Ki Chidiya, or The Golden Bird, depicted the societal exploitation of a person who has no agency or voice owing to his/her poor socio-economic condition.

The orphaned Lakshmi (Nutan) is passed from one relative to another as no one is ready to bear the burden of sheltering her. She lands up at the home of Dhanpat Rai. The family has not a single earning member and survives on the meagre pension the patriarch recieves. Lakshmi is treated as a servant with nobody except Dhanpat Rai showing her any affection.

However, the tide turns when the family realizes that Lakshmi's singing talent and beauty can bring it great wealth. Balram, the spoilt brat of the house, takes charge of her life and makes her sign one film after another and keeps all the money. Thus, Lakshmi becomes Baby who is nothing more than the goose that lays golden eggs for the Rai family.

While she is living a miserable and loveless life, Baby meets two men. One is Amar (Talat Mahmood), a poor but ambitious young man. The two fall in love and Baby, for the first time, shows signs of rebellion and courts Amar against the wishes of her 'family'.

When all attempts to peacefully get the family to agree to the union fail, Baby decides to leave the money and fame behind to join her lover. However, Amar has his own set of responsibilities and refuses to take her in without her money. Society and its men have betrayed her yet again.

The next man she encounters is Shrikant (Balraj Sahni). While his name keeps appearing on and off from the beginning as the poet Lakshmi adores, Sahni appears only in the second half. He is the idealist who wants to live in a world that treats all men equally.

Baby, distraught from the failure of her first love, finds solace in her favourite writer and almost begins to live with him. After a brief misunderstanding caused by Balram, the couple unite and walk away, leaving behind the world of sham, cant, trickery, and utilitarianism.

Through the main characters of the film, Chughtai looked at society from three perspectives. One was that of Lakshmi's docile character, who has no voice and can easily be exploited by those who have even marginal power.

The second was that of Amar, who is not a bad sort but is burdened by responsibilities. While he loves Lakshmi, he lacks the strength to go against the dictates of society.

The third was Shrikant's. He is the man who writes about the realities of the world and its people, and yearns for a Utopia, where wealth is equally shared.

Going by the way she lived her life and the subjects she chose to write on, it is clear that Ismat Chughtai identified most closely with Shrikant. She defied society's rules, represented reality in her works, and was hopeful that there would come a day when no individual would be deprived of his share of bread and respect.