After director Shazia Iqbal, Bebaak cast and crew write to MAMI over film being dropped


Bebaak has Vipin Sharma and Sarah Hashmi in the lead cast. The team reiterated that none of their crew was facing allegations of sexual harassment and yet their film was dropped.

After production designer-filmmaker Shazia Iqbal penned an open letter to Mumbai Academy and Moving Image (MAMI) seeking a reason for dropping her short film Bebaak from the festival this year, her cast and crew has also written to MAMI expressing their disappointment.

On Saturday (20 October), it was reported that Iqbal had penned an open letter to MAMI over her film Bebaak being dropped from the festival, which will be held from 26 October to 1 November.

The festival organisers had issued a general statement expressing solidarity with the filmmakers whose films they couldn't screen at this edition.

"It’s a tough time for the film industry and our hearts go out to the filmmakers whom we may have disappointed by our decision to not screen their films at this edition. However, we at MAMI are in solidarity with #MeToo, and we stand by our decision because there is a larger movement that has begun. We request understanding from the filmmakers and the many people involved with making these films," said MAMI's statement. 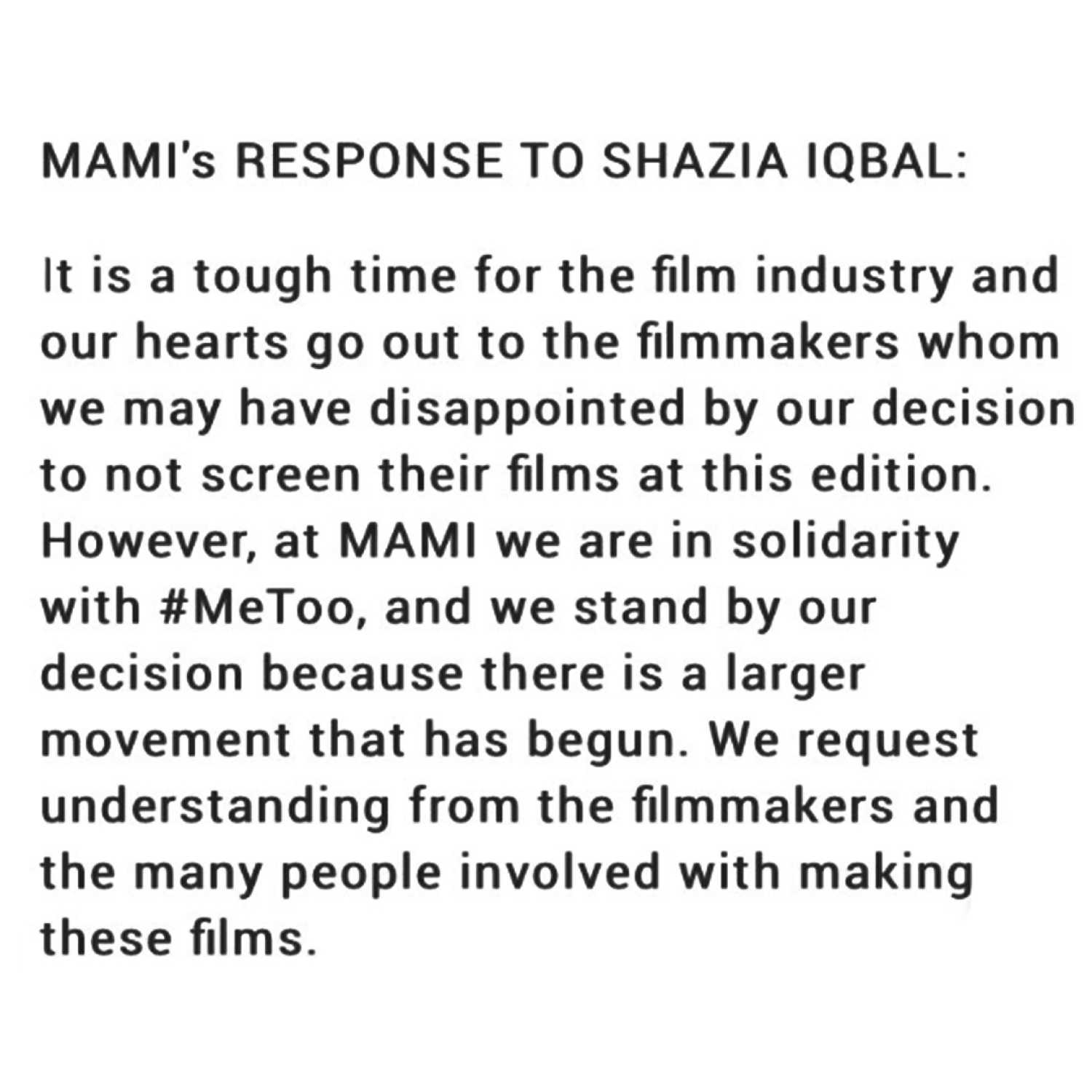 Iqbal strongly believes that her film was dropped because it had Anurag Kashyap as a co-producer. Kashyap had resigned as a board member of MAMI following the dissolution of his production house Phantom Films and the serious sexual harassment allegations against Kashyap’s former Phantom Films co-partner, Vikas Bahl.

Bebaak has Vipin Sharma and Sarah Hashmi in the lead cast. The team reiterated that none of their crew was facing allegations of sexual harassment and yet their film was dropped.

Expressing solidarity with the survivor in Bahl's case, the Bebaak cast and crew underlined that that issue had nothing to do with their film.

Bebaak isn’t the only film to be dropped from MAMI this year.  While MAMI has banned films, the cast and crew of Bebaak are surprised that the organisers haven't disassociated with Oxfam, the non-profit charitable organisation that is mired in a controversy where some of its staffers have been accused of being involved in a sex scandal while carrying out relief work post the Haiti earthquake in 2010.

Oxfam India is associated with the MAMI film festival, and has initiated the Oxfam Award for Gender Equality to be given for a socially relevant film. Nine films have been nominated for the award.

"If the MAMI festival is going to bar every film related to any person or linked to anyone accused of being a sexual predator, then their line-up will need drastic pruning. We stand by our director Shazia Iqbal’s statement where she has pointed to some other films that have been equally unfairly removed from the festival, and also to a number of films, as well as the Oxfam Award, that has been retained in spite of their associations with persons or organisations that stand accused [sic],” the cast and crew pointed.

“We protest against the discrimination and injustice that is being done to us. We request the organisers of MAMI, please do not demean us by saying that this is in support of the #MeToo movement. We join Shazia in urging MAMI to release a statement that specifically refers to our film and explains why they have chosen to act against it and not against another [sic]," read the statement.

Read the complete statement by the key cast and the crew below.