Tanya Paul Singh, an assistant on Baaghi 2 (2018), has accused Shaikh of harassing her on the sets of the hit film.

Ahmed Khan with Adnan Shaikh (right)
give your opinion

Tanya Paul Singh, who was second assistant director on the film, has accused Adnan Shaikh of indecent conduct on the sets.

Tanya Paul Singh posted a few #MeToo posts on her social media accounts, accusing Adnan Shaikh and make-up artist Harish Wadhone of harassing her. While Shaikh allegedly misbehaved with Tanya Paul Singh on the sets of Baaghi 2, she called out Wadhone for his behaviour on the sets of Ajay Devgn’s De De Pyaar De (2018).

Tanya Paul Singh narrated her horror stories on Twitter. She began her #MeToo story by mentioning Adnan Shaikh at the outset. In a conversation with Cinestaan.com, she made it clear that it was Adnan Shaikh whom she has accused of molestation.

“It was at the beginning of the film Baaghi 2," she wrote on Twitter. "In the middle of the meeting with the writers and director, he kept tugging at my bra hook and strap. The director could see me but not his hands, as I ahead of him. He would put his hand on my thigh, hit hard and create a sound, comment about my thighs and the sound they make.”

Tanya Paul Singh alleged that Adnan Shaikh acted like a bully, demanding a massage from her and other women around. “Before every call sheet was to be checked by him, he would demand a massage or refuse to check the call sheet. With eight managers chewing my head I had no option but to give in, with the other three ADs [assistant directors] watching,” she wrote.

The young woman discussed Shaikh’s behaviour with other women, all of whom agreed that the man did not know how to conduct himself professionally. She said she even complained to a woman production executive, but because Shaikh was related to the director Ahmed Khan, they could not do anything.

Once Tanya Paul Singh started resisting his behaviour, Adnan Shaikh apparently started being rude to her, ridiculing her in front of everyone.

“On the last day of the shoot, I was wearing a top with a ripped back," she recalled. "He told me it is inappropriate and that he would pull me by my bra. Since it was the last day, I gathered some guts and told him he should stop behaving like a molester and fulfil his duties.

"He would constantly ask for massages from different women on the sets in all departments. To say something he would come close to the ear, or touch them inappropriately to which they would politely step away. We all gave in to the nepotism. It’s either quit or handle it smartly or suck on it,” she said.

The bad experience left her depressed, Tanya Singh said, and she put on 10 kilos. "I was depressed for the next six months and it made me feel that if you are not related to a big person in the industry, it will always be a struggle to survive despite good work,”  she said.

Read Singh's complete post describing her ordeal on Baaghi 2 below. 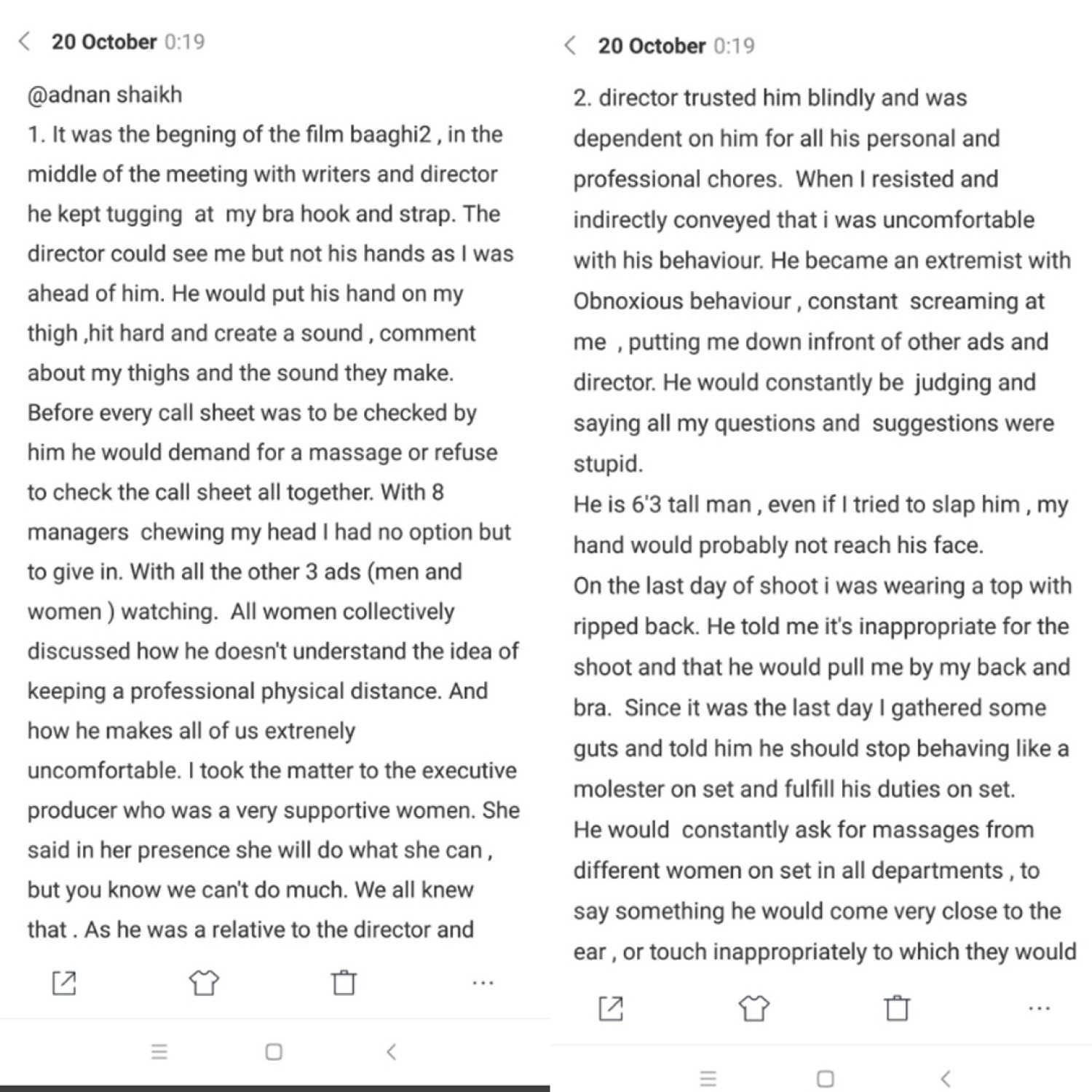 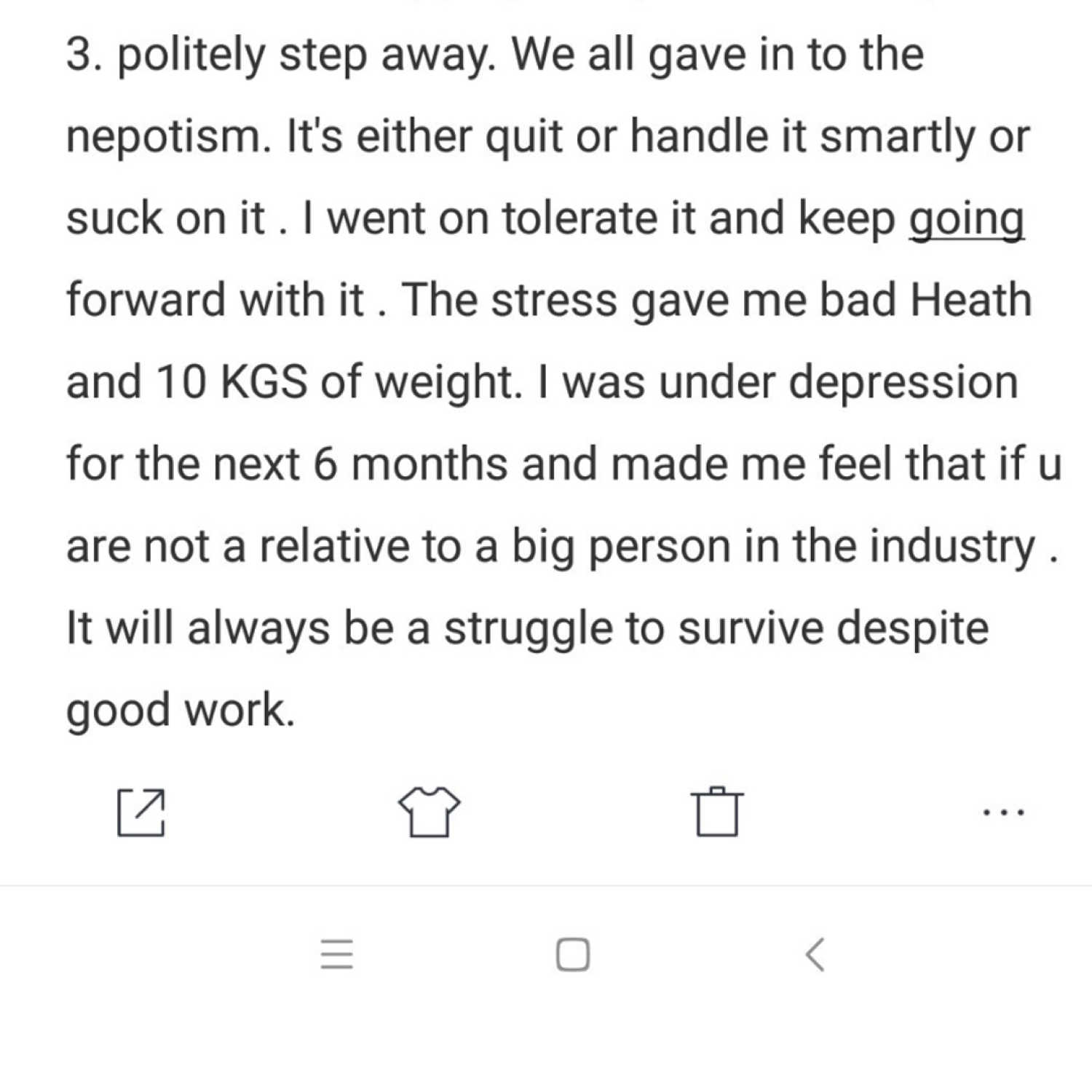 Shaikh has worked on all of Ahmed Khan’s films and is set to make his directorial debut with a Sanjay Dutt-starrer, The Rise And Fall Of Bambai, a collaboration between Ahmed Khan’s Paperdoll Entertainment and Studio Five Elements.

"When the first AD announced roll sound, I felt hands on my shoulder. Since I’m wired and already with a lot of continuity files in my hand, it’s almost impossible to look behind who it was. I could tell it was a man. He began to give me a very strong massage from head to tailbone. The touch did not seem right. In the middle of the shot, I couldn’t say anything. He picked a good time to victimize,” she wrote.

“The director said the shot was okay, but it had a continuity jerk, so, after 'cut', I had to run to inform them about the potential mistake. I had no time to respond to him. When I returned to the monitor, he said I should thank him for the massage. His presence made me extremely uncomfortable.”

Wadhone apparently did not stop here but tried to molest her again. Narrating the second incident, she wrote, “He would lean on the chair on the excuse of watching a close-up shot of Ajay Devgn. I felt his fingers on my back again. I informed, rather ordered, one of the interns to stand by my chair and not let anyone lean over to watch the Shogun. The make-up guy had the balls to move the intern physically so he could lean on me.” 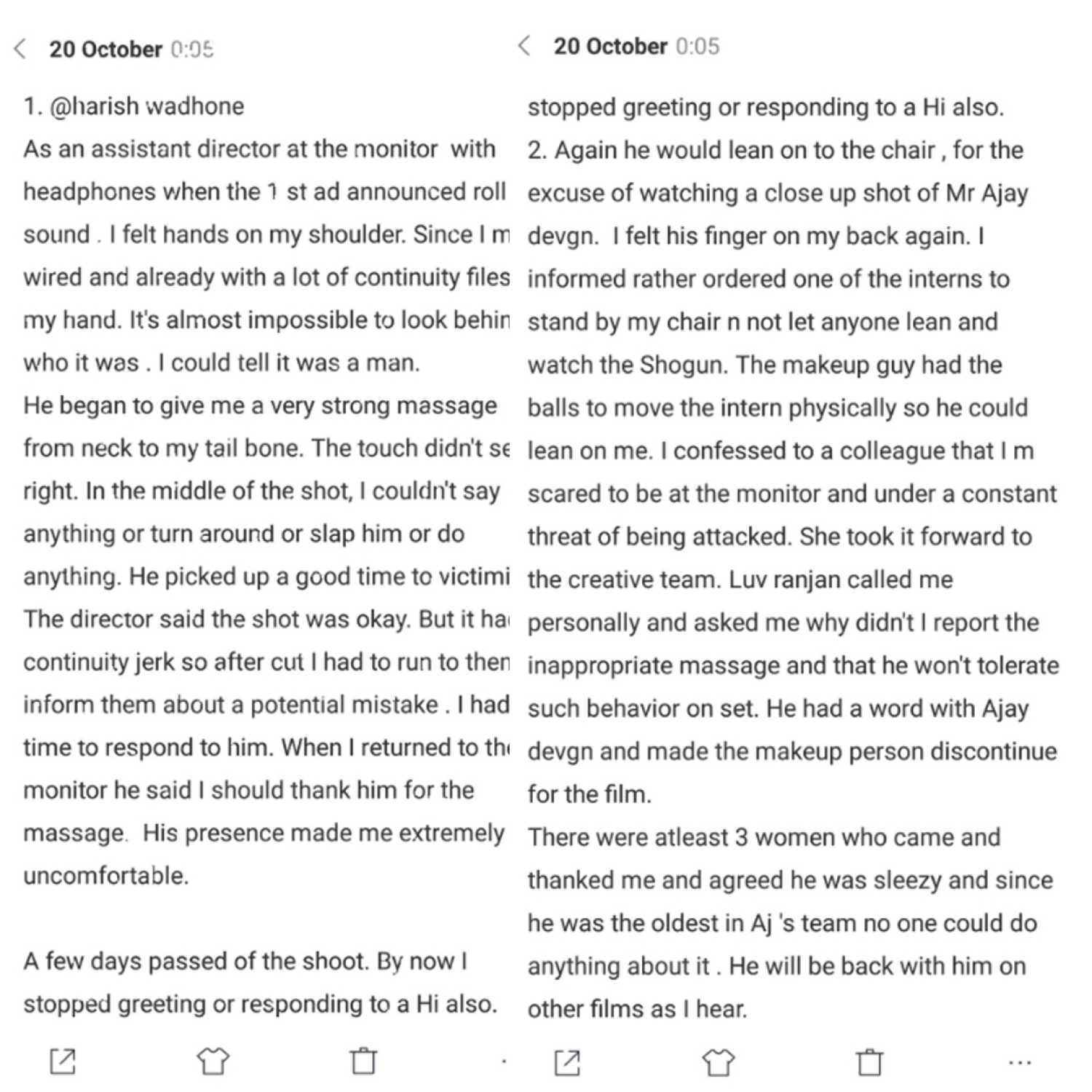 Update, 7 March 2019: Tags in the article were corrected.