While Kapoor dismissed the claims as false, Sinha refused to comment. Rane said Rampal was like a brother to all of them.

JP Dutta's last film Paltan (2018) flopped when it was released on 7 September. But it is back in the news now, for the wrong reasons.

Reports have emerged that actor Arjun Rampal bullied his younger co-actors on the sets.

Paltan featured Rampal, Jackie Shroff, Luv Sinha, Siddhant Kapoor and Harshvardhan Rane in leading roles. The film was based on the India-China standoff at Nathu La in Sikkim in 1967.

On 10 October, one Rahul Kohli posted a cryptic tweet about harassment by a senior actor on the sets of a film. He did not name the film or the senior actor or the alleged victims. But he did say that two of the 'victims' were star sons, and the father of one is a politician.

"Harassment is not confined to females in the film industry," Kohli wrote in his post on Facebook. "Just last year on one of my film shoots, I saw a senior actor relentlessly bulling not one but two newcomers who both are star sons, one being a star-politician's son, and both with star siblings.

"It was not a one-off but ongoing ruthless bullying in front of everyone, to the point that one of the poor guys even stopped eating with the crew. The other one, being a little more tactful, managed to get out of the way by giving gifts and even literally asking the senior actor not to target him anymore. Nothing was spared, they were body-shamed, criticized for their eating, workouts, acting and even their families. This relentless onslaught continued for all the 30 days I was there." 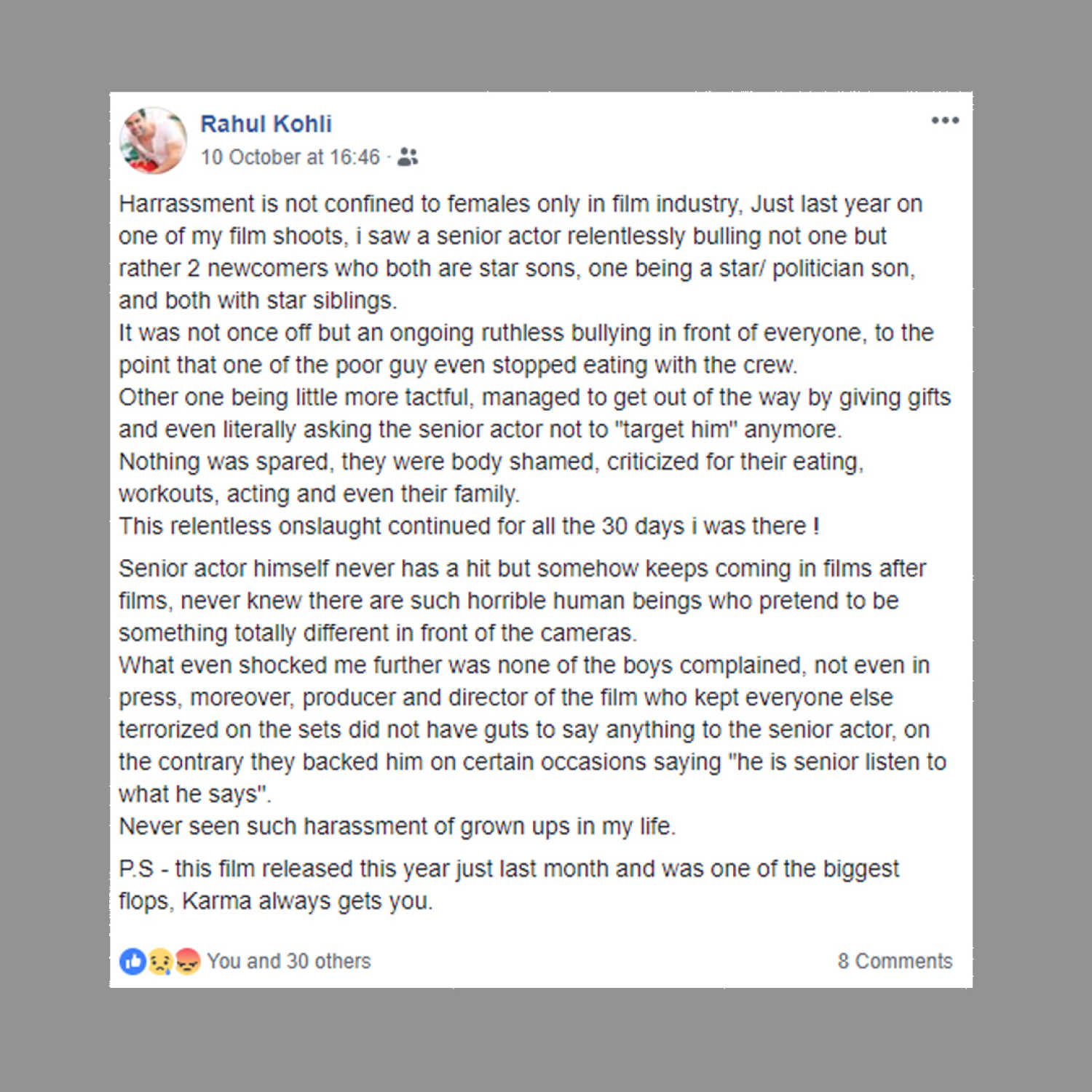 Kohli was part of the supporting cast of Paltan, where he played the character of Captain Rahul Sharma. We contacted Kohli, but he refused to speak.

We then got in touch with a couple of people close to the film who claimed that Rampal behaved in an obnoxious manner. According to a source, Rampal was constantly body-shaming his co-actors Rane, Sinha and Kapoor.

"Arjun Rampal would bully you and the next moment he would be laughing," the source said. "Now, if it happens a couple of times then it would be a prank, but if it happens repeatedly then I’m afraid isn’t that bullying?"

The source alleged that Rampal’s bullying started with Siddhant Kapoor. “Once we were having food and Rampal poured hot water over Siddhant Kapoor's head and broke into laughter. Rampal then mocked him for having a poor body,” said the source.

In other incidents, another source alleged that Rampal pulled Kapoor’s forearm hair and often hurled pebbles at his co-actors' genitals.

“Ten of us were sitting and Rampal grabbed a pebble and hurled it at Siddhant’s balls," the source said. "This happened on the third or fourth day. On another occasion, Siddhant was applying moisturiser on his forearm. Rampal mocked him for having thick hair growth. All of sudden, he plucked his forearm hair with his hand. And, as always, he would break into a laugh. After bearing it for a few days, Siddhant told Rampal, 'bro, find some other target’.”

With Rane, the source alleged that Rampal mocked him for his body. “Arjun had this weird habit of [betting] on bizarre things," the source recalled. "He would often say that the loser will have to pay him an amount. He would mock Rane for having a poor body, having too many carbs, say stuff like 'his calf is not perfect, he has a bad body'. One day, he asked Rane to flex his biceps and landed a blow to his balls. He and everyone around would simply laugh.”

Rane was apparently quick to sense that to avoid bullying he had to become friends with the senior actor.

“One day, Luv Sinha asked for a half-naan [an Indian bread], and Rampal taunted him, saying, 'Luv is on a special diet, he needs a naan. He is loading his carbs.'," said the source. "Luv felt embarrassed. There were times when Rampal mocked him for 'nepotism'. Luv would merely listen. Tired of the constant taunts, he stopped eating with them.”

We contacted Siddhant Kapoor and Luv Sinha for a response. While the former dismissed all these claims as false, the latter simply refused to say anything.

Rane said Rampal was like a brother to the junior actors in the film. "He was more than helpful to not just me but to every cast member," he said. "He always motivated us boys to work out, and even helped us in scenes as he was the most experienced of most of us."

Since the call was not very clear, we later specifically asked Rane through a text message if Rampal had body-shamed him or hit him in the groin. Rane repeated what he had said, adding, “I share a very warm and wonderful relationship even after the film."