While the film deals with the subject of rape, Soni says it is also about faith and how life is more than just one unfortunate incident.

Julie, Vantur’s character in the film, is a Krishna devotee who comes to India on a pilgrimage but gets raped.

Soni’s film is said to be based on the rape of a foreign tourist in Mathura, Uttar Pradesh, in 2017. But the film does not focus solely on that case.

“There are a million unregistered cases in the country, and someone needs to voice them," Soni said at the film's poster launch event. "In our film, there is this very important thing that Jimmy's [actor Jimmy Sheirgill's] character does. He is fighting for all those women whose cases have not been registered.”

Given how the country is battling sexual crimes against women, and with the #MeToo movement gaining momentum, a film like this becomes relevant. Soni hoped that the agitation and films like his would help to make a difference.

“We are fighting for all women, especially those whose cases haven't even been registered," he said. "Be it rape, marital rape, what is the conditioning of a woman after rape, and the conditioning of the man who does it? A rape doesn’t happen out of the blue. It is a deep rot. We have to name and shame the rapists. Maybe not today, but a couple of years later, we may be able to make a difference.” 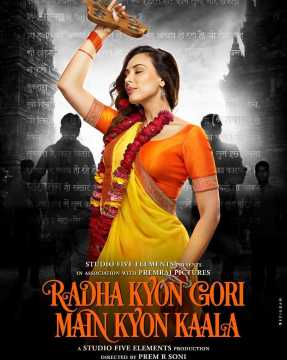 Given the subject of the film, the title Radha Kyon Gori Main Kyon Kaala does come as a surprise. While he did not explain the reason for this title, the director harped on how his film also deals with faith.

“Rape is an issue that plagues this country but my film is also about faith," Soni said. "A faith that we have in ourselves, in our spirituality. Our film is about a Krishna devotee who, despite the rape, does not lose faith in Krishna.

"I don’t think I could have found a better title," he continued. "What this film will tell you is that there is life even after an incident like this. That life is much more. We have forgotten the teachings of the Bhagavad Gita. We need to awaken that.”

The shooting of Radha Kyon Gori Main Kyon Kaala will begin in November and the makers are targeting a late summer release. The film is being produced by Studio Five Elements.