When we come together as people who don’t have anything, there is still some power in that collectivizing: Filmmaker Maheen Mirza


Maheen Mirza's documentary If She Built A Country examines the relationship of Adivasi women with the forest and foregrounds ways in which their land is being affected and how they seek justice for themselves and their communities.

A still from Maheen Mirza&#039;s documentary If She Built A Country

Maheen Mirza’s latest, If She Built A Country (Agar Woh Ek Desh Banatee), questions the notion of prosperity and what constitutes wealth while looking at how rural Adivasi working-class women living in the villages of Raigarh, Chhattisgarh, grow out of their traditional roles to find the power to fight authority.

As mines and power plants appear and grow in monstrous proportions around them, swallowing up large tracts of forest land and polluting their rivers, the women understand, define and envisage a different kind of development, rising against power and joining hands to protect their habitation.

The documentary, which was screened at the Open Frame Film Festival at the India International Centre, New Delhi, examines the relationship of the women with the forest and foregrounds ways in which land is being affected and women seek justice for themselves and their communities. It delves into their way of life, weaving together their songs and folk stories to emphasizse their ancestral wisdom and forms of expression.

Maheen Mirza has worked with collectives and peoples’ groups. Her earlier film Turup (2018), by the Ektara Collective, was screened at several festivals across the country.

In a chat with Cinestaan.com on the sidelines of the festival, the filmmaker spoke about her latest work and the concerns it raises. Excerpts:

In the panel discussion following your film, you astutely observed that the media is very happy to see adivasis as the ‘exotic’ in a way, but when it comes to looking at their fight for their homeland, they aren’t interested. What led you to explore their struggle?

There are certain places on the map of our country that are gaining prominence for all the wrong reasons, and as people who are not just making films, but are also concerned about what is happening to our fellow human beings, one of our concerns was the large-scale corporatization taking place in Chhattisgarh. There are people living there who are facing the brunt of that, but their rights and their lives were not really coming out in the media.

So, this was a concern. We were interested in looking at the struggles that people are going through but not just as an anthropological interest.

These people are facing something they have never faced before. And in light of that, how does this wisdom, knowledge, energy that they have, which is probably as old as human life itself, how does that translate in the face of a struggle? That is what we were trying to see, not the romance of it.

It does get romantic when you see these women as powerhouses, the way they are joined by people in the street when they set out. There is an insinuation by the state that there are some others from outside who go and organize these struggles. But when people are faced with such repression by the state, there is going to be a response.

That is what we were trying to see, how are people living in villages responding, people who have to face a legal system that they know nothing about, how are they responding to this. That was the concern.

In films that look at the struggles of the disfranchised, we usually see some responses of those in power, but not in your film. Was that too predictable to be included?

It was a conscious decision because when women set out to fight, what do they actually own? The land is not in their name, the forest is not theirs, it belongs to the state. They only have their bodies and their minds, their intellect, which they will have to focus in some way and get some kind of energy.

When you are stripped bare of any other resource that could have helped you, how do you assemble resource? It is only you and others like you who can come together. And this understanding grows in the sangathan [organization] also, as the fight becomes more structured, that it is only when you are able to put out collective strength. And this understanding comes more easily to women as they are willing to put out their collective strength.

When that happens, that is the kind of power they are able to harness. Not the power of one or the power of resources that something inanimate would bring them but a growing, dynamic power.

So it was a conscious decision to capture how people come together when faced with such large-scale loss which we can’t even imagine, such large-scale repression where police is deployed against you every time you sit for a chakka jam, that’s what we wanted to not just bring out but also celebrate, that when we come together as people who don’t have anything, there is still some power in that collectivizing.

The last time we spoke, we talked about your film Turup (Checkmate), made by the Ektara Collective. How is it different in terms of your method and experience as a filmmaker to be making a film on your own as opposed to working in a collective?

Well, old habits die hard so it’s a bit overrated to think there is a single auteur in a film because that’s not true. You work with collaborators. If Rinchin was not there to bring out the stories and shape the film in a particular way, I don’t think the film would have happened. If the women would not have taken us to the places where they took us to show us what they thought was important, I don’t think the film would have happened.

But isn’t it the filmmaker's vision that brings these elements together? Or do you have a different working process?

I feel that the process also matters to a large extent because once we did the edit, we felt the need to go back to the village and do a review and see how it was working, because the language was a little unfamiliar to us, so there were many barriers towards understanding what people had shown us.

Everybody has worked at what they are good at, so people are trying to get the things together in the best way possible, and you are trying to bring those things together in the way you can, and I think those lines are blurred. We write our functions in a particular way, as direction, cinematography, editing, but it is very difficult to say that here is where the camerawork stopped and there is where the editing began.

Maheen Mirza: We need to bring back viewing of films as a community

So after we did the rough cut, we went back to the village and got some feedback from the people. Also because the people have given the names of the companies and there is some amount of risk in that when it goes out. We had a discussion about whether we should take out those parts.

They [the villagers] said it’s a threat in any case — if they don’t come to get us for [naming them], they will get us for our land. If they have called war, let’s fight back in every way that we can and name the culprits.

So, we did have such candid discussions and we have taken a lot of strength from those women.

That leads me to the panel discussion again, where you said we need to stand by the women in their struggle and absorb it within our frames. What is your hope from your film which is engaging with the idea of development from the perspective of being a woman?

People who are more articulate will give you bullet points on how development should be, but it’s too experiential for these women. It is in their lifetime that they are seeing all this loss, and they do not know whether they will see any gain in their lifetime.

How they envisage it is a mixed bag. While they are critiquing something that they know is not right, they still want to fight it lawfully.

There are certain nuances they bring in. If you speak to the women and ask about their emotional connect with their land when it was taken away, they will not say yes or no, they will tell you the story about the old man who came and saw the gaping hole and subsequently died.

When you ask about the animals and wildlife being affected, you will get the story of the Nagraj because that is very much part of the lifestyle. So they won’t tell you that the wildlife is decreasing or that elephants are coming into their fields. They will tell you the story and you will understand, so it is metaphorical, it comes from their ancient wisdom.

So there is no bullet point, there is the community. There doesn’t seem to be a well-thought-out strategy or framework within which they function, but the instinct is centred on the community and the thought that what earth will future generations inherit? 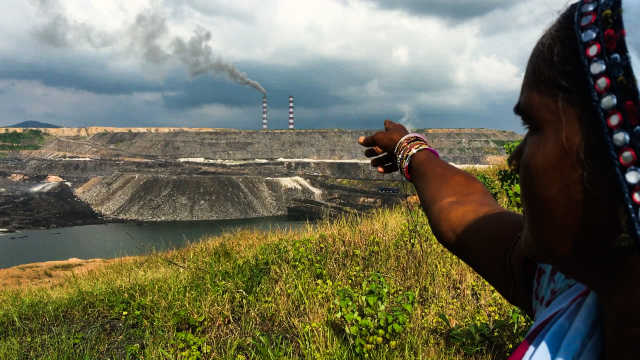 So, for example, environmental pollution is not seen as the responsibility of the state; they see it as their own responsibility and they have the thought that the person bringing the destruction is being irresponsible but we cannot be like them.

This was complex for us to understand in terms of concept. How do you do a critique or put all of these elements together and have a vision of the country? Because it doesn’t seem very simplistic when she says [in the film], can’t development be like when everyone does the Karma dance together?

If She Built A Country (Agar Woh Ek Desh Banatee) was screened at the PSBT Open Frame Film Festival at the India International Centre, New Delhi, at 11:30am on Sunday 16 September 2018.