Sad that Aditya Chopra has taken no disciplinary action against Ashish Patil: Survivor


A former model and aspiring actress, who shared her account of sexual harassment at the hands of Patil, business and creative head at Yash Raj Films, says she is "disappointed" that Chopra has opted to remain silent.

On 10 October, a former model and aspiring actress, had accused Ashish Patil, the business and creative head at Yash Raj Films, of sexual harassment and exploitation through an anonymous post, which was shared from the account of Japleen Pasricha. The incidents date back to 2016.

She described her ordeal where Patil allegedly “tried his moves and eventually got his way.” The survivor also wrote about how being harassed by Patil over a period of time took toll on her "after which she quit the industry and gave up her dreams of becoming an actress."

#MeToo Sharing an anonymous survivor account of a former model and former aspiring actress who has spoken against @patilashish of YashRaj Films of sexually exploiting her. Screenshots are with her consent. #TimesUp pic.twitter.com/jMe7Yzx5hB

Patil denied all allegations in a Twitter post the same day, and said he was open for inquiry. "I cannot prove my innocence to a nameless, faceless, anonymous person," he said. It has been two days since and no inquiry has been ordered by Yash Raj Films yet.

When we contacted the survivor, she texted us saying that she was disappointed that Aditya Chopra, being one of the most powerful and respected people in the industry, is staying silent on the matter, instead of calling for an inquiry. "I am willing to co-operate if there is a formal inquiry by Yash Raj Films," the suvivor told Cinestaan.com.

Several accused of sexual harassment and misbehaviour in Hindi cinema's #MeToo movement have been sacked from their positions and investigations are to begin.

While Sajid Khan was dropped from Housefull 4 by producer Sajid Nadiadwala, director Subhash Kapoor was sacked by Bhushan Kumar's T-Series from the Gulshan Kumar biopic, Mogul.

Here's a detailed statement by the survivor:

"Mr Patil revealed himself in his statement. He definitely thinks that aspiring actors are 'nameless, faceless, anonymous' people. So it's easier to carefully pick the most vulnerable ones looking for work opportunity and manipulate them while keeping their SAINT image intact via posting on social media (claiming how madly he is in love with his wife and such a great father he is.) A good man does not take advantage of a young girl, force himself on her, cheat on his wife and later claim the crown of the most saintly, God like person. When the truth is that even the saints are not the saints in today's world, an individual must atleast have some integrity!

I am sad when everyone is taking a stand, Mr. Aditya Chopra (who has the most decent image) chooses to stay complacent, tolerant and supportive of such an atrocious act which usually costs a girl's mental health, life and career. Infact, there has been no disciplinary action taken or official statement from Yash Raj Films yet when the offender openly challenges me to come out in open and produce facts!!! Who am I supposed to produce these facts to? Ashish Patil !!? And if Mr Patil still does not recollect who I am, clearly that shows that this is his usual practice which he does on daily basis and manipulates other vulnerable girls while again posting of his God like saintly status on social media!"

Below are the screenshots of the texts sent to us by the survivor: 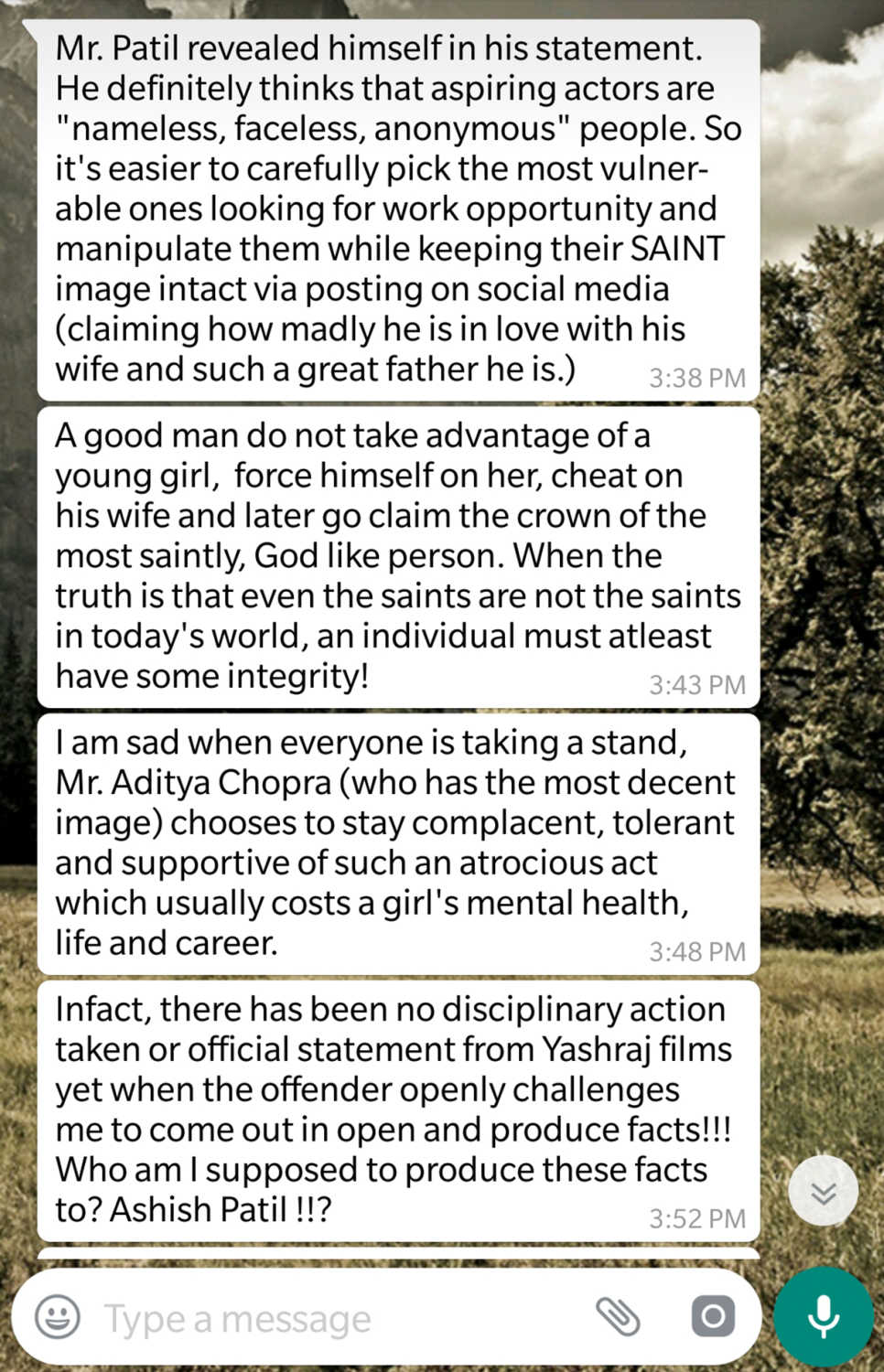